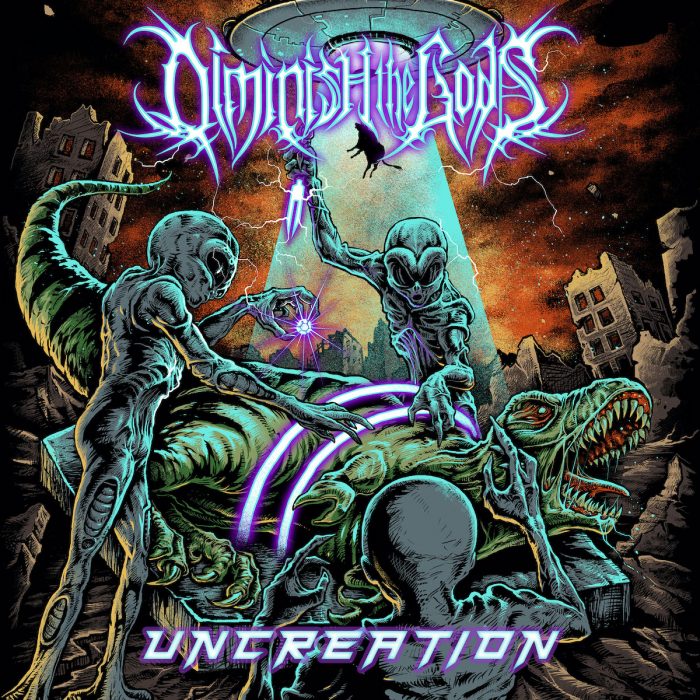 “All of these songs were completed pre-COVID—I still don’t think the music business will be what it was before COVID hit—the music scene has changed a lot, so I have no idea what’s going to happen with that stuff.”

These are thoughts that you’re no doubt tired of hearing and numb to reading—but it can hardly be overstated just how much of an impact the pandemic has had on independent music, particularly on artists just beginning to get rolling with their professional careers.

James Cecchetelli, the frontman and mastermind of Diminish The Gods, is firmly in this camp.

Having released a thunderous, raging debut in 2014, markets were beginning to open up for his project. Their face-ripping brand of technical death metal began pricking the ears of curious supporters all over the world.

The groundwork had been laid alongside supporting some of the biggest names in the game. It was time for a follow-up record to take things to the next level.

Of course, there’s no need to indulge in the chain of events that followed. The plans of many, including those of DTG, were collectively derailed.

With the world slowly but surely beginning to restart however, things are beginning to look promising for Diminish the Gods.

New single Uncreation is a sprawling epic of monstrous proportions, with all manner of technical wizardry and blood curdling metal imagery thrown into a menacing aural stew.

It’s the first taste of EXOPAEDIAN, the new album set to drop next year and forge the next chapter of the Diminish The Gods story.

There’s no religion, politics, that sort of stuff – none of this was written at an angry time or a bad time of my life or anything like that – it’s just me enjoying myself and having fun.
[ James Cecchetelli ]

For James, it’s a global approach that will determine success for the record.

“There’s not really any shows over here in Australia, or putting time into anything here as far as shows go, because I’ve never really received anything back,” he says.

“I’ve accepted the reality of that – I don’t want to sound like a downer, but I know that my genre of music makes it a lot harder to move forward. A lot of people that I chat with don’t like heavy vocals in music, so I try my best to make it catchy and interesting, so even if you don’t like heavy metal you can at least try and get something out of it.

“I don’t sit down and plan to write a song – I try not to have any structure or plan, I never think ‘it has to be as good as this or like this….’ I just want my music to be at an elite level, like Archspire or The Faceless—you can listen to those songs over and over and over again and always find new things in it.”

It’s an ambitious goal for the project—but one that James is adamant can be reached if the music is allowed to speak for itself.

“It’s more of a musicians’ style of music… I spend more time on writing my music, rather than pretending I’m someone that I’m not.

“There’s no religion, politics, that sort of stuff – none of this was written at an angry time or a bad time of my life or anything like that – it’s just me enjoying myself and having fun.”

“Space horror, cosmic horror stuff- I love that sort of stuff, that’s what a lot of my music is about.”

With the world once again at his feet and a collection of dazzlingly complex and exciting songs to boot, there’s no telling what 2022 will hold for Diminish The Gods.

The only thing to be sure about is that whatever comes in the next 12 months, it sure won’t be half-arsed from this crew.

“We want music to speak for itself, for people to understand the time and effort that have gone into the songs,” says James.

“We want people to know that we’re a band of a heightened quality.