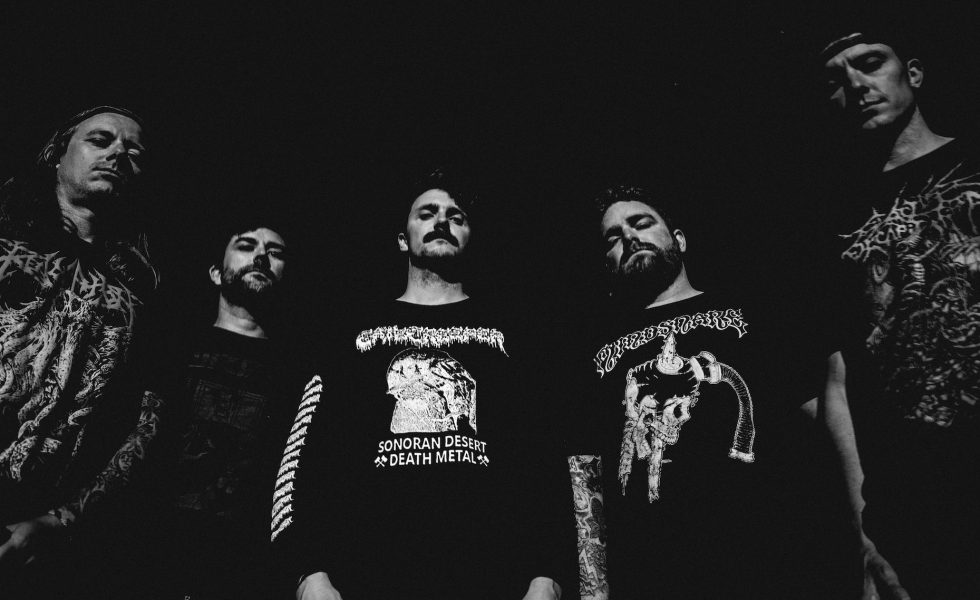 Burial Pit is a caustic and violent sludge band from Sydney.

Originally conceived around a series of songs guitarist Jack Thomas – usually a drummer – wrote as music he could “stand up to play”, the band has now completed their crushing and unsettling debut album Subhuman Scum.

First of all, let’s get some of the history of the band, because you are actually a drummer, not a guitarist, right?

Yes this is the first band I’ve played guitar in. I played drums in another band with Scotty, our vocalist, called Yąnomamö – which he’s still in. That’s a little more groovy stuff, not quite as heavy. I’ve always written stuff for bands, but I’ve never actually backed myself enough to play guitar in one! That’s actually what inspired some of the riffs. I wanted to write something that was really slow, and heavy and crushing. A lot of stuff that I’d be able to play standing up! That forced me to simplify things a little bit, which I think really benefited the music, making everything slower and crushing with dissonant chords. That kind of inspired the sound.

How long were you working on this?

It’s been a while actually. I probably wrote them… It’s hard to keep track of the years at the moment! But I think I had them for about a year before we started jamming. I was still playing in Yąnomamö at the time and I wasn’t really sure what I was going to do with them. Then I met [Matt] Sourdin, our bassist, just in the park up the road from my house through mutual friends and we got chatting about music. He mentioned that he used to play in Bad Blood and a bunch of stuff but he hadn’t really done anything for a while. He was friends with Chris who is now our drummer, and Gibbo as well, our guitarist, so in chatting with them I said that I had a bunch of tunes and I didn’t know what to do with them and asked if they’d be up for having a go at it. Everyone was really keen, and out first jam sounded fantastic, so it all came together pretty easily before the plague hit and delayed everything!

It’s definitely not a feel-good jam. I kind of wanted it to be anxiety-inducing. Not so much so that you couldn’t listen to it, but it was inspired a lot by a Primitive Man album called Caustic that I was listening to which is just so punishing it’s almost impossible to listen to the whole album.

So how much did you manage to get done before that happened?

Well the album that’s coming out now was already written before I met the guys, so it didn’t take too long to come together. Everyone kind of learnt it in their own time and when we got in the room it was pretty easy to make it all happen. Then we put a rougher version of the song Disgrace, which is the first song on the album, out so we could get a couple of shows going and get some reception as well. We only managed to play a small handful of shows in 2019 before everything got shut down. So there was a bit of a pause on that, but it meant we could focus on getting the album done and put that out.

Subhuman Scum flows very well as a suite of songs. It almost seems like there’s a concept or major theme going through the album, the way that it flows together.

It’s not a concept album in that sense, but there is a recurring theme in all the Burial Pit stuff that we’ve written. Musically, and more importantly lyrically, I guess, it all comes around to violent retribution for victims… a real hatred towards abusers, people that abuse others, people that abuse their power over others. The whole theme revolves around victims getting their revenge in pretty brutal ways. Sourdin put the noise/drone tracks together, which are on each side of the record, and also close it, as well, which really helped him set the sense and bring all the songs together as well.

The audience for this type of music is definitely going to enjoy Burial Pit. Fans of bands like Eyehategod and Lo! and bands like that will likely really come across to this – it sounds so anguished and painful.

I used this to get all that anger and stuff out. It’s very cathartic. All the themes for the songs came from watching the news and documentaries and just seeing the state of paedophilia in the Catholic church, and the rate of domestic and family violence going up, and perpetrators getting away with heaps of shit, with minimal punishment, and it just infuriated me, man. Not being a violent person myself, this was a way of getting those feelings of rage out.

It’s not something you can go into with a casual attitude. It’s definitely a very intense record.

It’s definitely not a feel-good jam. I kind of wanted it to be anxiety-inducing. Not so much so that you couldn’t listen to it, but it was inspired a lot by a Primitive Man album called Caustic that I was listening to which is just so punishing it’s almost impossible to listen to the whole album. So I wanted to recreate that same kind of dragging-you-through-the-mud type of experience but also with some death metal grooves to make it catchy and make people want to listen to an nine-minute song and not feel like they can never listen to anything again!

You have launch shows coming up now.

We have a date in Melbourne, playing the Old Bar on the 29th with MUNT and Isua, who are both fucking awesome. The Sydney show is at Mothership Studios on June 4, which is a studio space where we actually filmed the video for Lord of Limbs. We have Descent coming down from Brisbane, they’re an awesome death metal band, plus Alchemy and Oar. We’re really stoked with the line-up that we’ve put together for it, with help from Dave and Luke at Brighttown Records. We’ve only played a couple of standing up shows, so it’s going to a change for us to be up and close to people.