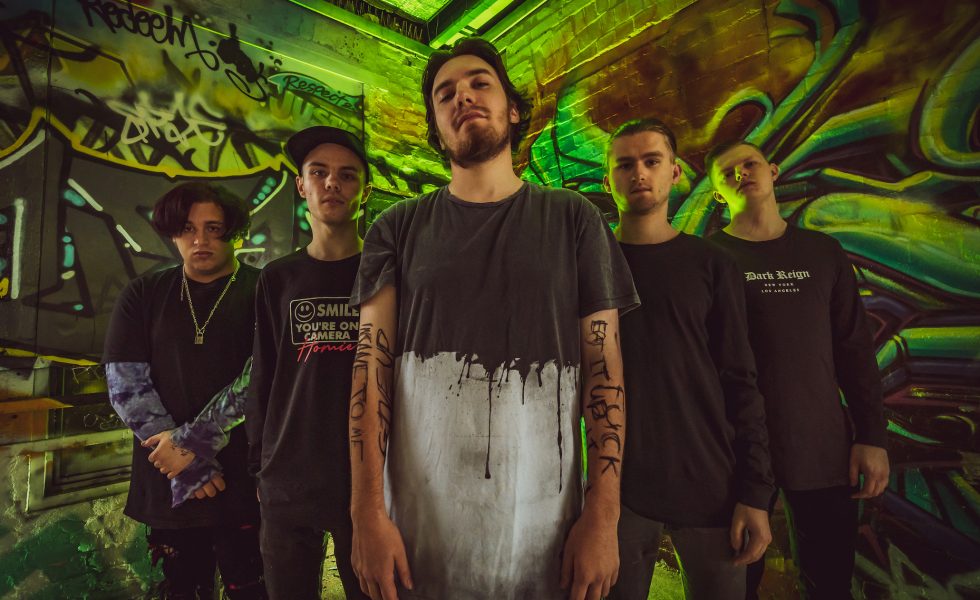 WAKE THE BLIND // Beyond Broken Casket

At a time where most bands have been forced to slow down and stay at home, Melbourne nu-metalcore act Wake The Blind are just getting started.

Fresh off the heels of their debut EP Broken Casket, if anything vocalist Dylan Stone is grateful for the chance to take a break.

“We spent pretty much the whole year making [Broken Casket], and I think we were just glad to get three months to sit and almost do nothing, besides obviously going on social media. So, in a way it was kind of nice. We were kind of bummed, we were hoping that we’d have a couple of shows coming up and hopefully getting on a tour by at least the end of the year, which may still happen, but we’re unsure at this stage. But yeah, it was actually kind of therapeutic. Not gonna lie.” says Stone.

Regardless of whether they’ll have the chance to hit the road again anytime soon, Broken Casket speaks for itself as a strong debut for Wake The Blind, and one that strongly represents the band’s unique sound.

“I think it’s a great starting point for us as a band. And I definitely think there’s still so much to come. We can’t wait to share a lot of the things that we’re going to be bringing out even later on as we progress as a band. This was a point in the band where we thought, okay, this is our sound. This sound is who we are. Let’s just keep pushing it.” says Stone.

After knowing the metal community in Australia for so long, it’s so healthy, it’s so pure, it’s one of the best communities you could possibly be in, in my opinion.
[ Dylan Stone ]

Not only does Broken Casket provide a solid starting point for Wake The Blind musically, but it’s a record that delves into a striking subject matter–with many of the songs on the record centring around themes of suicide and mental illness.

“My focus on this particular EP was going towards mental illness, suicide, abuse, et cetera. A lot of the key problems that are in our society at the moment. And we really wanted to take a focus on that strictly for–obviously it being a problem–and we wanted to talk about something that doesn’t really get talked about. And basically, when I thought of that idea, I kind of just thought: ‘Well, it’s something that everyone, whether it’s firsthand or in a third person, they always see it or feel it or witness it.’” says Stone.

“So, everyone kind of goes through it. Everyone sees it. Why not show that in lyrics?” continues Stone.

Heavy music has always been a positive outlet for darker feelings and emotions in artists, but how does pouring your heart out into such overwhelming issues affect the recording process for a record like this?

“It was definitely something that wasn’t necessarily easy to record. There were definitely times where I felt angered or incredibly upset just performing it. And if anything, it kind of made me a better person out of it, knowing that I could say this certain message and people could hear it and hopefully could get through the day after listening to it because they relate to a similar issue.” says Stone.

“And I think that’s pretty much the same with the rest of the band. They kind of played the songs, heard the songs constantly and just kept going. Just to know that, at the end of the road, there’s always someone listening who’s going through the same thing.” continues Stone.

After putting so much heart and soul into a record like this, it must be discouraging for Stone and the band to not be able to tour straight away. While restrictions around the world are still seeming rather bleak for the live music scene, Stone is confident that we’ll find our way back to gigs as soon as it’s safe to do so.

“After knowing the metal community in Australia for so long, it’s so healthy, it’s so pure, it’s one of the best communities you could possibly be in, in my opinion. And it’s something that will never go away. Even with shows being capped at 50 people and seated, people will still go. They’ll make those shows maxed. They’ll sell out simply because people want to see shows. It’s not ever going to stop. So, yeah, I think we’ll go full force.” says Stone.

Until then, Wake The Blind have every intention to keep up the momentum. While touring may still be up in the air, Stone already has his eyes set on the next release.

“I would say a year from now would probably be a safe bet on the next Wake The Blind, whether it’s EP, LP, album. That’s definitely a good mark-up. Probably this time next year, we’ll be trying to push out something special again.” says Stone.

While Broken Casket has given Wake The Blind a solid foundation to stand on, cementing their unique nu-metalcore approach, according to Stone there’s still much more instore for the band’s next release.

“We’ll definitely aim to try and branch out to some new ideas, but also keeping the core foundation of what Wake The Blind currently sounds like. So, yeah, it’s kind of a mix between a Broken Casket 2.0, but then maybe chuck in a couple of new things here and there. Just for the sake of keeping us interested as well.” says Stone.

Until that next record comes around, we’ve still got Broken Casket to rock out to, a fresh and inventive heavy debut from the Melbourne act; with an important message at its core.

“I would love for people to sit down, look at the lyrics to every song, or even just a song that resonates to you, that you enjoy the most, and understand what the story is behind it and what the message is behind it. Just so you understand that, whether it’s the suicide side of things, or abusive relationships, mental illness: they’re all things that people go through every day. And if you can read that and try and get a grasp of understanding as to what people go through on a daily basis, then maybe it might help change your perspective.” says Stone.

“But yeah, I mean each to their own, I’m just happy that people like the music.” continues Stone.