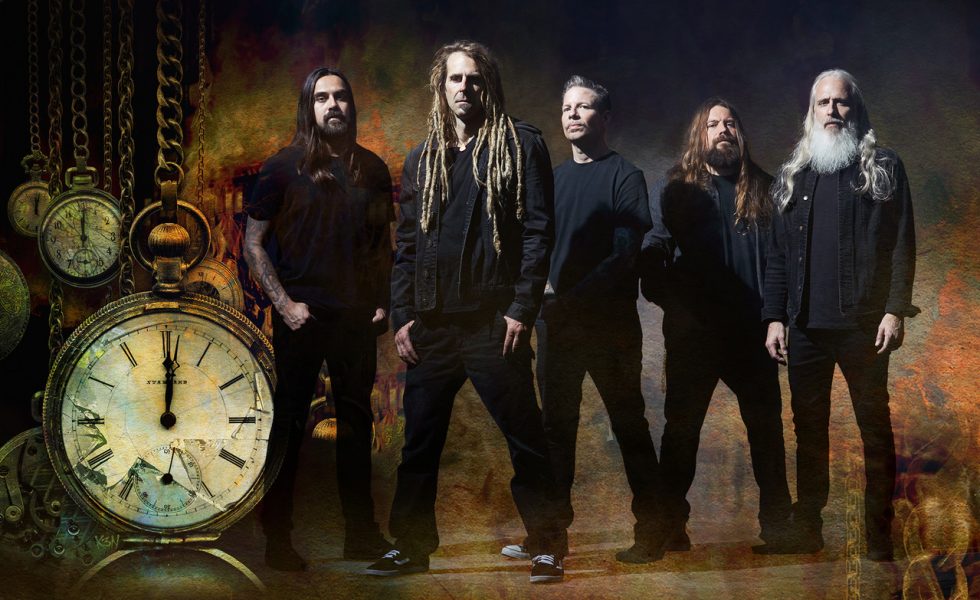 LAMB OF GOD // Only A Headbanger Knows The Feeling

The opening track of the new Lamb Of God album, Momento Mori is a heavy metal classic in the making.

Propelled by the band’s trademark riff attack, staccato aggression and Blythe’s call to “wake up!”, it could be directed at any number of issues that have forced the world off its uneasy ‘business as usual’ kilter in the recent past.

The song Routes is a more directed effort, a reflection on the singer’s own experiences at the North Dakota pipeline protests. As Blythe explains, the rest of Lamb Of God are remarkably hands off when it comes to exploring these potentially fractious themes that such a wide audience will be exposed to.

“I don’t really consult with [the other band members] about what I am going to write” Blythe says in his trademark drawl. “They are supportive dudes of what I do and how I live my life. I know some of them were stoked I went up there [North Dakota], we talked about it. We’re 5 very different people, I write about my experience and what I feel strongly about. That’s always been the way. As long as I don’t start spouting some nonsense they pretty much give me free reign. I’ve been their singer for 25 years, they know me pretty well and haven’t complained–that’s a good thing.”

Everyone with an internet connection is well aware how toxic social media is, and for a band like Lamb Of God with a massive appeal across the various subsets of the heavy metal community, surely they cop some flack and blowback at times. Unsurprisingly, Blythe is not concerned.

“I don’t fucking care” he states in no uncertain terms. “I’m not interested in arguing with people online, it’s really a fruitless exercise. I don’t look at the comments on the Lamb Of God Instagram, I only use social media to promote my photography. I have better things to do than police the internet.”

In July last year, drummer and founding member Chris Adler left the band after 25 years. From Blythe’s perspective, it was a smooth transition to working with new drummer Art Cruz.
“There’s always been 3 guys that write the music in Lamb Of God; Mark Morton, Willie Adler and me,” he says. “It wasn’t really different, we just wrote a record. The difference in the process was that our drummer Art is almost 20 years younger than me, I’m going to be 50 in February. So he did bring a more youthful energy to it. He also brought the perspective of a long term fan of the band, which was very interesting. We could take that into account … or not. It didn’t mean we’d necessarily do it. We don’t write music for the fans, we write music for the 5 dudes in Lamb Of God—always have, always will. I think the fans respect that, it means you’re staying true to your artistic vision. It means we’re not trying to follow some kind of formula. Sometimes the vision works, sometimes it doesn’t, but it was cool to hear that fan perspective.”

The current pandemic’s effect on literally everything is well documented by now. With the new record’s release date pushed back and their monster US summer tour with Megadeth, Trivium and In Flames now rescheduled for next year, Blythe is relatively sanguine but does miss the energy of the live environment.

“When we play a show obviously we are a band on stage and the audience is there, but I really think of it as our show together; the totality of audience and band,” explains Blythe. “The more energy the audience gives off, the more energy I put in. It’s a symbiotic relationship, we feed off each other. It’s a beautiful thing, it’s a massive exchange of energy and a form of communication. Right now with everyone being so isolated, I miss that communication, that human feeling, that huge feeling of community at a show. We are all together. I miss that very, very much. I’m really looking forward to getting back on the road. I can’t complain though, I’m in a better place than a whole lot of people. I still have a job, I haven’t lost my home or my business. I feel really bad for all the people burdened with the economic fallout of this ordeal.”

With talk of the uncertainty of future plans, Blythe really has the ideal solution. “I’m taking each day as it comes, there’s not much else you can do,” he says. “I suppose we could write another record, but that’s a terrible fucking idea. Management, booking agents, venue owners, promoters; they’re all working very hard in an impossible situation. My job is relatively easy in comparison, I’m kinda along for the ride. Everyone’s doing the best they can, in the meantime I’m just gonna go surfing.”

Lamb Of God’s self titled album is out June 19.