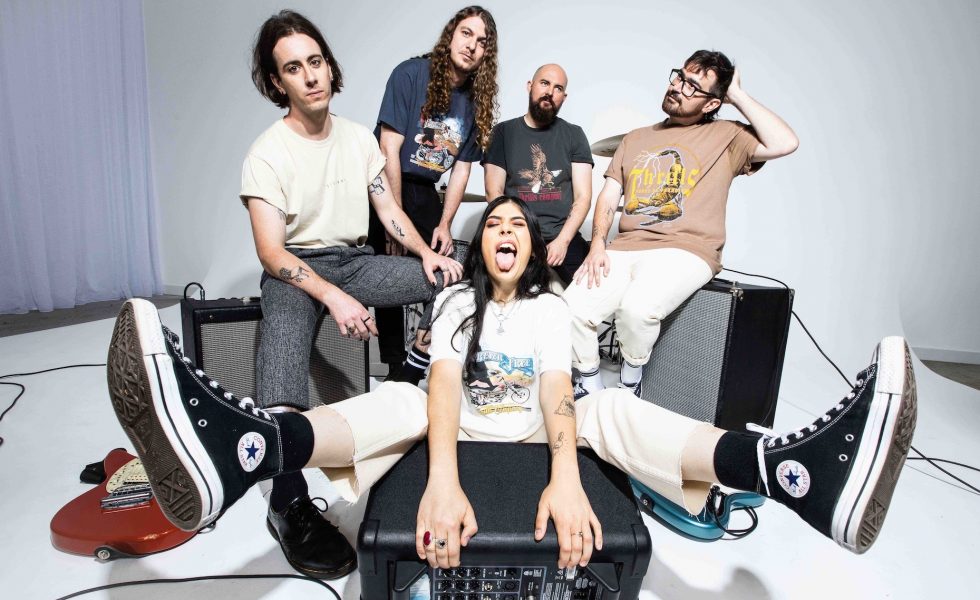 WAAX are on the lips of punk rockers from Busselton to Broome thanks to colossal debut record Big Grief. Grief is visceral; Big Grief doubly so.

MORE: KICK OUT THE JAMS WITH DREGG // OCEAN GROVE: A Slight Return To Earth // THE AMITY AFFLICTION: Smoke ‘Em If You Got ‘Em REVIEWS: THE AMITY AFFLICTION: Everyone Loves You… Once You Leave Them // SAVIOUR: The Luna Rose // SILVERSTEIN: A Beautiful Place To Drown // OCEAN GROVE: Flip Phone Fantasy // CODE ORANGE: Underneath // VIOLENT SOHO: Everything Is A-OK // AUGUST BURNS RED: Guardians // IRIST: Order Of The Mind // THE CHATS: High Risk Behaviour

WAAX have stamped their indelible mark on rockers of all stripes around the world. They’ve played in holes in the wall in Brisvegas to big gigs in New York; all on the back of non-stop gigging, hustling, and the release of this Australian Music Prize-nominated album. Gearing up for a three month national tour with indie darlings Bugs and Semantics in October when the outbreak is (hopefully) over, we spoke to vocalist Maz De Vita about their towering rise and being heroes in two musical worlds.

Big Grief is such a deeply personal record, yet it’s so confident in its emotional reveal. What was the process like in getting to a point where you felt comfortable to share those kinds of emotions and dive into those scenarios?

It was a real rollercoaster honestly. It was a massive build up to that point after the first two records. Even though I’d been writing songs since I was like 13, I never took songwriting seriously enough, I just wanted to scream onstage and wrote songs that reflected that.

Then when Wild And Weak happened, I realised I can be honest with my feelings in song and that’s what I loved doing. It’s bizarre because in my everyday life I struggle to talk about how I feel.

WAAX have played some insane shows over the last few years – everything from Falls Festival, to Unify Gathering and supporting the likes of Fall Out Boy and Biffy Clyro. What have been some of the most defining moments as a band over this time?

I think when we played Falls Festival in Byron at the beginning of this year, it was the first time we’d played with the whole album out and I was shocked by how into it everybody was.

Because we hadn’t toured the record yet we didn’t know people knew the songs so we were expecting people to just nod along but there were heaps of people who knew the words so it was pretty wild.

It felt like there was a real sense of family and community in that moment, and we really felt like we had done something right with the album.

I’m finding that the more we play live, the more I want to cry on stage. I think it’s just seeing people reacting so emotionally, because it’s really cathartic for us.
[MAZ]

What has it been like seeing fans respond so cathartically to those innermost personal moments on the record in a live setting?

It’s wild. I’m finding that the more we play live, the more I want to cry on stage. I think it’s just seeing people reacting so emotionally, because it’s really cathartic for us.

On this tour we’re including a lot more production and lighting into our set and it’s going to help people really experience the album in an immersive way, the way we wanted it to be. We want the crowd to feel the songs the way we feel them.

I’m finding that the more we play live, the more I want to cry on stage. I think it’s just seeing people reacting so emotionally, because it’s really cathartic for us.

I think people want to experience rawness—I think there’s a lot of organicness in rock music. We’re saturated with tracks that are made electronically, and obviously I love that stuff, I love pop music. But I think people are also attracted to a hectic live show. There’s something about a live rock show people have missed—people need a place to release their energy.

We’re more focussed on their emotions and realness and the bands you mentioned really make an effort to make sure there are no barriers between them and the fans. We just want our community to thrive. When we were coming up we felt very isolated as a rock band, but as we’ve developed and grown, we’ve realised that all the bands in the rock scene are just like us as people.

WAAX have bridged a gap between the triple j rock scene, the heavy music scene – what’s it like as an artist navigating between these worlds?

I was talking about how we’ve crossed over a little bit, kind of like what Violent Soho have done, I think they’re in the same boat. I think there needs to be more diversity in the heavy scene and I’ve been working towards that and learning about how this scene works.

Branching out and learning about our heavy audience is really interesting, and if I can help nurture some diversity in that scene then bring it on. I’ve always loved heavy music and I think there is room for it.