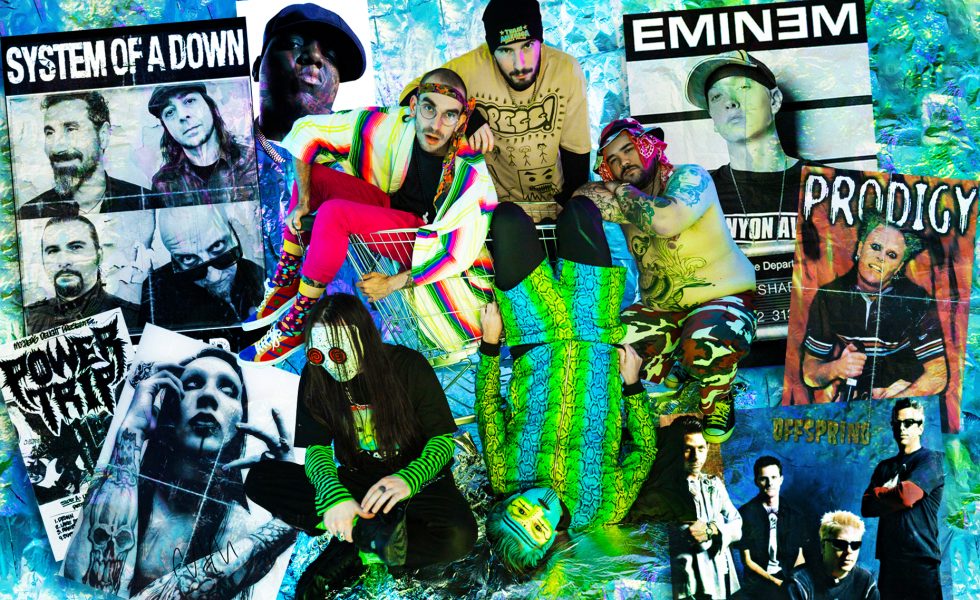 KICK OUT THE JAMS: DREGG // ‘Hectic’ Times At All-Genre High

Genre-killers Dregg are the third Aussie band to have signed a worldwide deal with punk rock label Epitaph Records; and we’re kicking out some jams to celebrate.

A five-piece fusion of hip-hop, metal, and hardcore, Melbourne’s Dregg were set to eviscerate the stages of Download Festival Australia this weekend; a testament to their animalistic live show and equally strong magnetism for mayhem. We all hope when the world recovers, we’ll see them many times over.

Releasing Hectic this week to commemorate their auspicious signing, we asked the band about what shaped their punk (and other genre love) that’s come and is to come. See what we did there?

I was in Sydney for the school holidays visiting my family for the school break. My Uncle Garo was looking after me one day at his place and he was very involved in the Australian/Armenian community. He called me over to his old Windows 95 computer and said he had found an Armenian rock band that he thought I’d love. Before this I had only really had interest in hip hop but there was something about seeing and hearing these guys with the same cultural upbringing as myself playing heavy metal that just had me hooked straight away. He showed me the song P.L.U.C.K (Politically Lying Unholy Cowardly Killers), a song that tells the story of our people and what we went through in the 1915 genocide that took the lives of 1.5 million Armenians, committed by the Turkish government. As an adult I now have the lyrics of the song marked on my body and they remain to be my biggest musical influences in heavy music today.

As I kid I was a little late to the Slim Shady party, but when I found my way there I never left. The zero fucks attitude, the colourful imagery of the video, the lyrical word play. Everything just blew me away. I’ll never forget pulling up to a Caltex with my old man and me begging him to buy me a copy of The Eminem Show that was sitting on the CD rack. From that day on I was a little shit and still haven’t stopped being one haha.

Parkway Drive – Smoke Em If You Got Em

When I was young I moved around to different schools quite regularly because of my dads job. One year I got put in a new school at Salamander Bay for six months. During these six months I was introduced to Australian heavy music. I rocked up trying to be cool and edgy by showing everybody the metal I’d been listening to like System of a Down, Lamb of God and Slipknot. Little did I know that there was an entire scene of heavy music in my own backyard I knew nothing about. Some kids in my music class asked me to learn the lyrics to Smoke Em If You Got Em so I could scream along in the music room at lunch time while they jammed it out. That was my first time attempting heavy vocals and I fell in love with the art.

Killswitch Engage – The End Of Heartache

This was the first real heavy song I heard as a 12 year old and I remember going “WTF IS THIS” the next day I went to JB Hi-Fi and bought two of their CDs. Rest is history.

This band was way ahead of their time. They are all super talented musicians and every time I hear this song I want to just MOSH! Still relevant to this day.

The Offspring – Pretty Fly For A White Guy

I remember watching this music video and laughing my ass off as a young kid but loving the song and dancing to it stupidly in the lounge room on Channel V.

The Ghost Inside – Unspoken

This song will always speak to me and will always remain huge to me, it definitely sparked my love for hardcore.

Another huge influence this band helped me through a lot of bad times, and definitely helped me expand my skills in both guitar and drums.

Just listening to this as a kid and being hyped on the fact he came from nothing and then was ruling the game just made me heaps motivated to want to live that life, ha!

Culture Abuse – Be Kind To The Bugs

This song I really enjoy lyrically. It’s four nice lines at the start of the song that basically I try to apply to everyday life.

Queens of the Stone Age – You Think I Ain’t Worth a Dollar, But I Feel Like a Millionaire

QOTSA have always been on heavy rotation and probably always will be. This track makes me wanna drive 1000 mph across the desert!

I remember watching this song on the Kerang channel as a kid and being fixated on Manson’s imagery and energy.

Aggressive, twisted and fascinating, definitely one of the first tracks to open up my mind to any sort of electronic music.