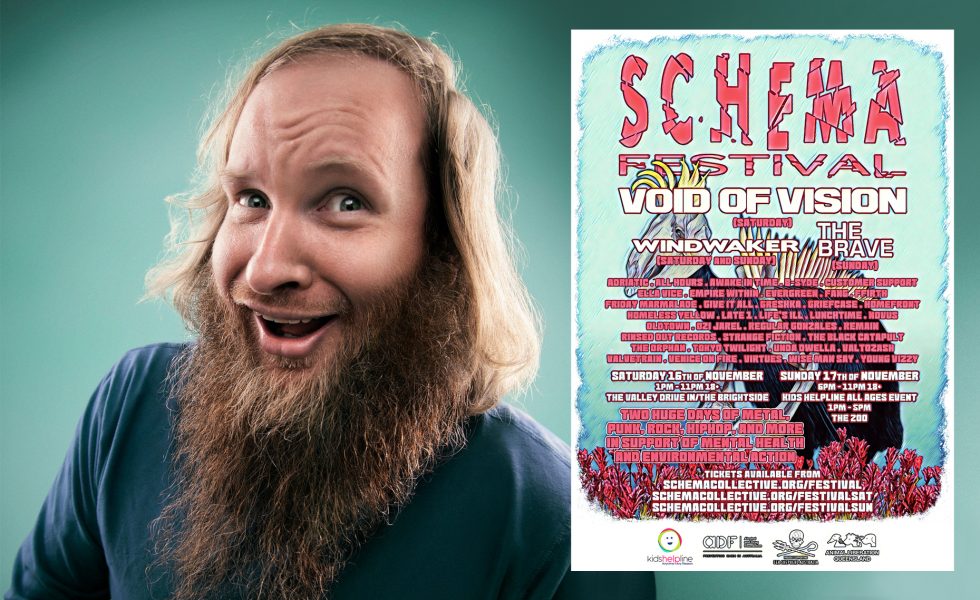 The SCHEMA Collective is gearing up for a mammoth two-day festival in the Valley this weekend, uniting every scene together under a banner of positivity and wellbeing.

Strictly DIY and all-inclusive, SCHEMA Fest has some big local names headlining such as Void of Vision, The Brave, and Windwaker; but also has punk bands, metal bands, and hip-hop crews spread across the stages of The Valley Drive-In and Brightside and the Zoo on the 16th and 17th of November. SCHEMA has a simple yet powerful mission: making a difference in the world while having a good time. They’re partnered with Sea Shepherd, 3rdSpace, Kids Helpline, and many more worthy charities and initiatives for youth. Talking to SCHEMA Festival organiser Rashid ‘Rash’ AlKamraikhi, himself a bassist and member of metal bands Massic and Dr. Parallax, we get the lowdown on this year’s SCHEMA Fest and the importance of all ages shows in a time where venues are scared of any number under 18.

Hysteria: This year’s SCHEMA Fest is bringing together some pretty big charities and causes, how did that all come together?

Rash: Yeah, so we run shows luckily throughout the year and we’ve got a big focus on partnering with other not for profit and charities. We help raise awareness for their causes. In the lead-up, we see how many want to come on board. The festival isn’t so much a money raiser, but more of a celebration of what we can achieve together.

last year we were very fortunate the Australian Drug and Alcohol Foundation and Kids Help Line to help us out with funding to run the festival. They were happy to help us out again. We picked up Queensland Animal Liberation and Tiny Houses for Homeless Youth too. They’re the main ones helping us and getting behind us for the festival.

The line-up has pretty much everything: Void of Vision is headlining one day, but you also have punk, metalcore, hip-hop.

We love, they love to mix genres. We love to try and unite the music scene. Not just the hardcore dudes and the metal dudes, but hip hop and everything else. We’re trying to unite everyone. We’re all in it together. We’re all part of the music industry as a whole. I mean, listen to anyone’s music collection. It’s very rare that they are genre pure. I do not guarantee any metalhead who pops out their Spotify or Apple Music there’s going to be hip-hop on there, there’s gonna be dubstep on there. Everyone’s got a wider taste than just the main clique that they fall into. So why not give everyone a chance to celebrate that as well.

Show me a metalhead who doesn’t have Cypress Hill in their collection and I’ll show you a liar.

One of the big issues in the scene today is mental health. It’s not just online harassment but exclusion. Is including everyone what this festival is about too?

Yeah, definitely. Yeah. No matter what you taste is or what’s external or what we project externally. Internally is where some of the hardest battles are fought. If we can connect on that level a bit better, that propagates everyone’s wellbeing and mental health. Everyone is included at this festival. When you’re with supportive people, your problems can’t be as bad as you think they are.

There’s a lot of activism at Schema Fest, but do you think it’s a hard act of balancing “activism” with the “party?”

That one can be a fine line. It is a celebration and yeah, you don’t want to be too heavy hitting. You want to be good ambassadors to youngsters. No one wants to deal with a shitty environment but we’ve got one, no one wants to have to deal with mental health, but we all to some degree have mental health issues. So it’s definitely tied up with that positive edge, but we can all still be aware and be responsible and we can have a party. It’s a reminder you’ve got every other day of the year to put some energy towards helping each other. Helping yourself, helping the environment.

If we can connect on that level a bit better, that propagates everyone’s wellbeing and mental health. Everyone is included at this festival. When you’re with supportive people, your problems can’t be as bad as you think they are.
[RASHID]

There’s also an all ages event on the Sunday—is that strictly under 18 or are all welcome?

It was originally being promoted as under 18, but there won’t be any alcohol sales during the show. We wanted to remove that completely from the environment and promote that as substance use and alcohol free event. A lot of people were sort of getting a bit concerned that over 18’s weren’t involved. We agreed that it be branded as all ages. Which is that it pretty much always was, but just to alleviate that concern. But it’s still with under 18’s in mind. It’s to give them the opportunity to come out and enjoy a show and experience the awesomeness of live music without having to worry about drunken adults messing things up.

Which is usually the problem. The under-18s, I wouldn’t think cause nearly as much trouble as drunk adults.

Yeah, that’s a massive hurdle for us to take to get it happening as well. Just with the way alcohol restrictions work. The licensing for the venues, the insurance. Like trying to try to find the right place, the right time that can satisfy all of those needs. Initially you want to go and pitch the entire festival as an all ages event … but as soon as you sort of mention that to the venue, the cost of hiring the place starts skyrocketing.

Now you’re putting this on over two days, I imagine there’s a lot of balls in the air when it comes to organisation.

[laughs] It’s definitely a unique challenge. We’re juggling many priorities and things at once. It’s hard to think of anyone in particular cause all those things … like there’s still so much work to be done, and we’ve only got a few days away till the festival happens. Trying to find the headliners that are within your budget and “on brand” with the message as it were. We’re trying to give better shows and experiences all the time. Getting the venue which also supports us has to be in the right location.

We want people to recognise the name SCHEMA and we want people to know that we’re serious about what we’re doing, that we’re doing good shows that we’re people to work with. So I was going to chance run out trying to find a way to balance all that and make it achievable. It’s an incredible undertaking. A crew like none of us do this professionally. I mean look, we’d love to, but at the end of the day we all have day jobs. We all have our families and we just do this out of pure love and passion for what we do. It gets bandied around a lot, but it’s true: “be the change you want to be.” That’s exactly what they’re doing.

What’s next for SCHEMA?

We’re going to try and put on a show about once a month. We’ve just started a really cool partnership as well with Extreme Skateboarding Federation Queensland. We’re going to put on an all ages show at a skate park. We want to reach out with more organisations and find more opportunities to put on shows. We want to help raise funds, raise awareness for great causes. Even if we can’t, we’ll just organise a show. That’s what SCHEMA is all about. Cause that in itself has a benefit, getting people together, hanging out, having a good time. It’s always going to be with a positive message.

Tickets to both shows, including the all ages show, are available here. 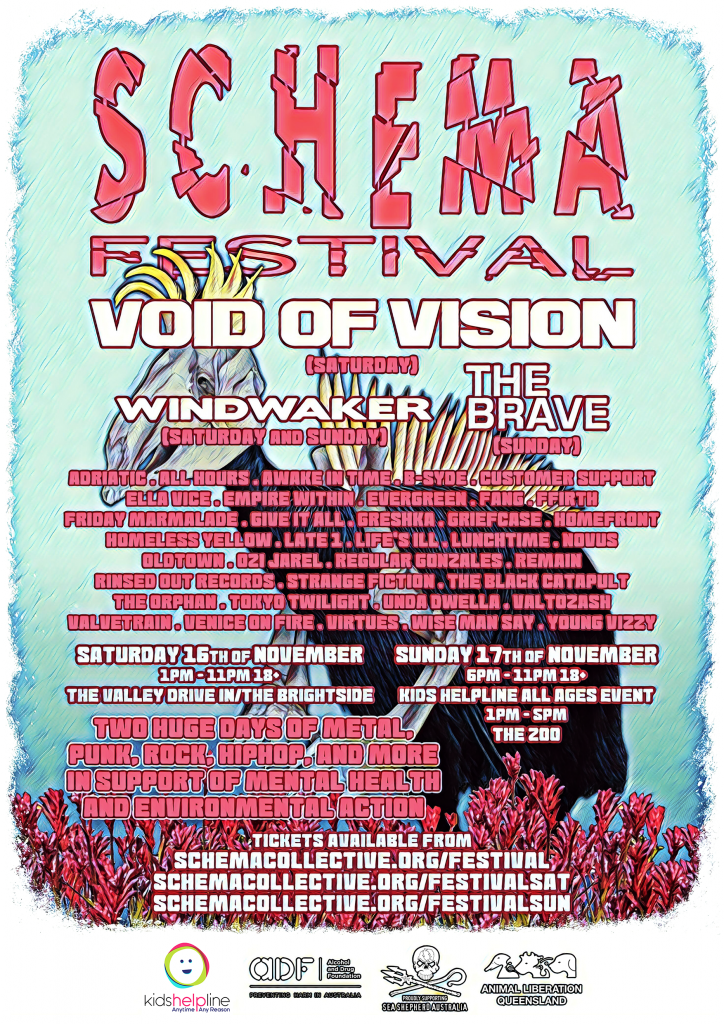