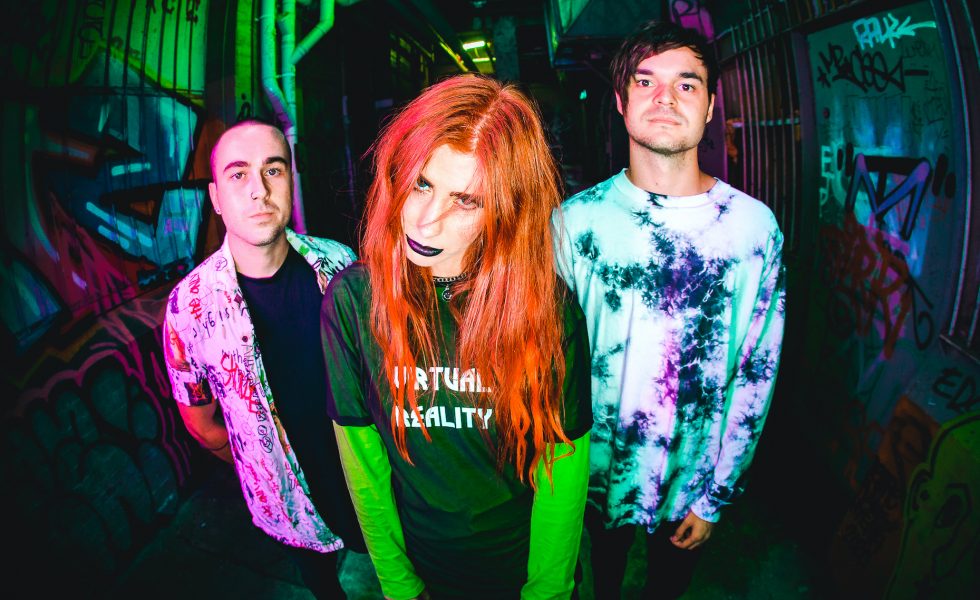 REDHOOK // No Cure For Psycho

Looking for the perfect track to unleash your inner final girl to? RedHook’s got you covered with their latest tune, Cure 4 Psycho.

It’s another killer (hehe) effort from the Sydneysiders and comes with an equally huge message. We got frontwoman Emmy Mack on the line to chat all about it.

Hysteria: Tell us about the new single Cure 4 Psycho, it’s a personal one for you.

Emmy: Yeah, honestly it’s probably the most anxious I’ve ever felt heading into a single release. It deals with some pretty dark stuff, even though it deals with it in a playful way. There’s a lot of layers to the track conceptually but overall, I wanted it to be a survivor’s anthem in our warped, weird RedHook way. Lyrically, it’s written from the perspective of a survivor who is now taunting someone that’s tried to kill them or hurt them with malicious intent. It’s very defiant and mocking, the verses really have that schoolyard ‘nanananana’ vibe, like you tried to kill me but you fucked up (laughs).

Growing up on a diet of Disney and Harry Potter, you’re fed this belief that if you don’t give up on someone and if you love them enough, good will triumph over bad. Coming to the realisation that sometimes you just have to get the hell out of there before they drag you down was a harsh, kick in the brain.
[ Emmy Mack ]

The writing process was interesting. Normally, with a lot of the songs I’ve written that have been personal, I reflect on feelings I’ve already processed. With this one, I was very much still processing my feelings as I was writing it. I was in a relationship that was quite emotionally and psychologically abusive and it was a weird one to navigate. Growing up on a diet of Disney and Harry Potter, you’re fed this belief that if you don’t give up on someone and if you love them enough, good will triumph over bad. Coming to the realisation that sometimes you just have to get the hell out of there before they drag you down was a harsh, kick in the brain. The whole process of writing this song was me coming to that realisation and liberating myself. Every time I was wavering in that resolve or feeling sentimental, I tried to remember all the terrible things I’d been through and everything that happened. I hope this song empowers other people to do the same if they’re in any kind of relationship with someone who is wreaking malicious damage to their life. Just get out, be Sidney Prescott from Scream.

Speaking of Scream, that reference in the bridge is amazing! Tell us about the decision to use that imagery in the track.

The scene at the end of the first Scream movie is so iconic! After being tortured the entire movie by these killers, it looks like Sidney’s about to die but then she puts on the Ghostface mask and starts taunting them back. There’s this one scene, it’s my favourite because it’s so meta, where Jamie Kennedy’s character says they come back for “one final scare” and Sidney’s like, not in my movie! It’s such a badass moment and such a flip of that damsel in distress trope, she takes her power back and ends up surviving. I thought it was a perfect metaphor for anyone who’s been in a toxic situation with a person who’s tried to hurt them with malicious intent, it’s empowering and just works with the concept of the song.

Earlier you spoke about how anxious you felt going into the song, how are you feeling now?

We’ve shown it to a lot of people behind the scenes and all of the feedback has been so positive, that’s made me feel less anxious. I do want to clarify something, the thesis of the song is ‘there’s no cure for psycho’ but I don’t want that to be misinterpreted in a way that vilifies anyone with mental health issues. First of all, I wanted to subvert the stereotype of a psycho ex-girlfriend. Whenever anyone talks about an ex-girlfriend and says that she was psycho I usually ask what they did to her to make her that way (laughs). I wanted to flip that on its head but also show that abuse doesn’t have a gender and anyone can be a victim of it or perpetuate it. When I talk about a psycho in this context, I’m talking about legitimate psychopathy in the most traditional sense. Someone who has no guilt or remorse; who is narcissistic, cruel and malicious and if you look it up, there’s no cure for that.

Whenever anyone talks about an ex-girlfriend and says that she was psycho I usually ask what they did to her to make her that way (laughs). I wanted to flip that on its head but also show that abuse doesn’t have a gender and anyone can be a victim of it or perpetuate it.
[ Emmy Mack ]

A music video will come soon, what can we expect to see from that?

You can expect what we’ve made a name for ourselves with. It’ll be a bit weird, quirky, zany, and dark, a wild ride! The music video is a pisstake on The Bachelorette, where all the eligible bachelors are famous serial killers (laughs).  I hope people enjoy it!

You’ve had a stack of singles drop since the band formed, is an album/EP on the cards in the near future?

Short answer, yes. We’ve been very busy behind the scenes during the pandemic and we’ve got lots of new music that I’m so excited to share. Despite the anxiety, I’m so excited to unleash it all. It’ll happen very soon!

It’s been a tough year not being able to gig, but you’ve got some shows coming up in Wollongong. Tell us about those.

I’m so excited to get back up there and see if I still know what I’m doing. The sitdown vibe is going to be very interesting, it’s not something we’ve ever done before and with our style of music, we’re so used to feeding off the crowd’s energy. We’re doing a doubleheader, two sessions in one night. The first one sold out in a couple of days, there are limited tickets to the second one. We’ve never headlined on a school-night (laughs), we’re stoked about that.

We were talking about getting a bingo wheel and taking advantage of the fact that everyone will be sitting there chilling. We’ll get some prizes together and draw some numbers out, that’ll probably happen. It’s definitely uncharted territory for RedHook but I’m just excited to see the fans again and connect with everybody.

Cure 4 Psycho is available for stream or purchase now.

Catch Redhook on the road with Down From Tomorrow