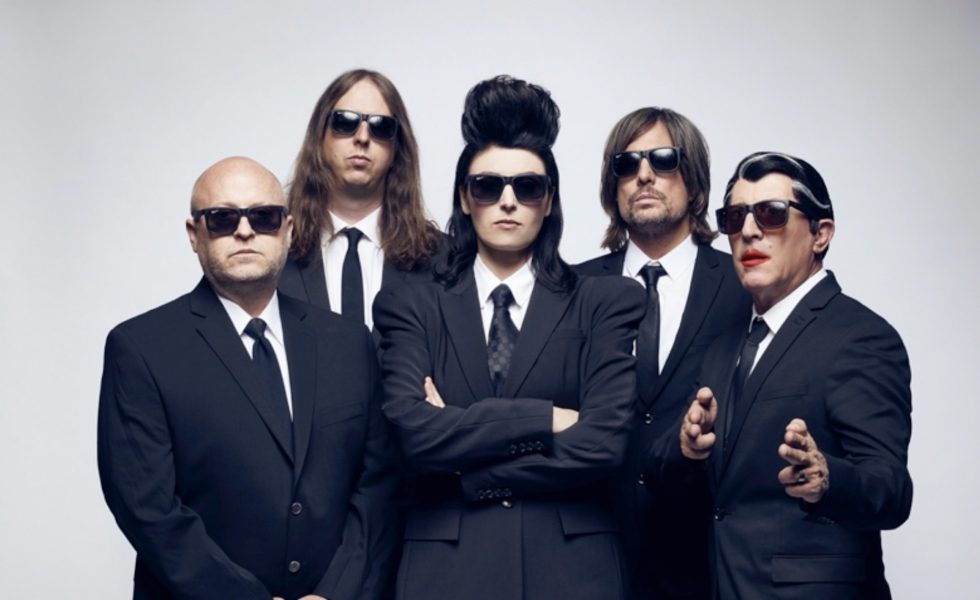 PUSCIFER // There Will Be A Reckoning

Tensions are high in pre-election Los Angeles. The only place that Carina Round has been able to find any sort of sanctuary is sitting alone in her car. “This is just how it is now, right?” she opines. “We’re not taking our children to the playground. We’re not mixing with people we don’t know. We’re all just kind of stuck in this psychological dead-end–at least until after the election.”

It’s in a moment like this that Round finds the time to have a greater appreciation of what fortunes she has in her life. “Despite it all, there’s a lot to be thankful for right now,” she continues. “We have a record out. My family are all safe and healthy. I’m being actively creative–I’m incredibly grateful that I’m in a position where I get to do that, even through a pandemic.” Much of Round’s aforementioned active creativity has been channelled into Existential Reckoning, the fifth studio album by the ever-evolving and often genre-defiant musical project known as Puscifer.

Often considered a solo project, the brainchild of Tool‘s Maynard James Keenan has served as more of a collective front in its more recent years and various iterations. Round was initially brought in as a guest vocalist and contributor around 2009, and has appeared on nearly every Puscifer release since. She and producer Mat Mitchell have taken a more prominent role in recent years–to the point in which the press photos for Existential Reckoning feature the pair alongside Keenan. Round is quick to note that the shift towards being one of Puscifer’s central figures came with becoming more familiar with her surroundings as far as the dynamic of the project was concerned.

If it was down to him, there might be a record every year. Of course, it comes down to how busy Maynard is. As soon as he’d come off tour with Tool, that’s when the ball would get rolling.
[ Carina Round ]

“Throughout the last 10 years, my relationship with Maynard and Mat has gotten deeper,” she says. “I feel like we’ve really built up a circle of trust between the three of us, which is really important in the people you make music with. I’ve definitely built up a lot of confidence in myself over those years, too. It’s a big part of this project. You have to put a lot of your heart in the process. You have to be a lot more present. It’s been a very natural progression.”

Existential Reckoning arrived exactly five years on from its predecessor, 2015’s Money Shot – to the day, 30th October. Despite the length stop-gap between albums, all within the Puscifer camp have remained exceptionally busy. Keenan, of course, released two new studio albums–A Perfect Circle‘s Eat the Elephant and Tool’s Fear Inoculum–after a decade-plus of studio inactivity from both bands. Round, meanwhile, released a new record with her band Early Winters, I Want to Break Your Heart, in 2017. She also got to tour North America throughout 2019 as a guest vocalist in the touring band for 80s pop legends Tears For Fears. The vision for what would become Existential Reckoning, however, was always rattling around in the back of the group’s hive mind.

“Mat starts the music for each record,” Round explains. “He was putting together the sketches for these songs in our hotel rooms, while we were touring in support of Money Shot. That’s the kind of person he is–he doesn’t come up for air very often when he’s in the zone. If it was down to him, there might be a record every year. Of course, it comes down to how busy Maynard is. As soon as he’d come off tour with Tool, that’s when the ball would get rolling.”

It’s not often Keenan’s work will be compared to that of Taylor Swift‘s, but there’s substance in arguing that Existential Reckoning is his folklore–insofar as it’s a record that wouldn’t have existed in 2020 outside of the pandemic context. Much like Swift, Keenan had a full year of touring planned, including arena shows and festival headlining sets for Tool. When all of that came to a screeching halt circa March, the gears began turning once again in the Puscifer camp.