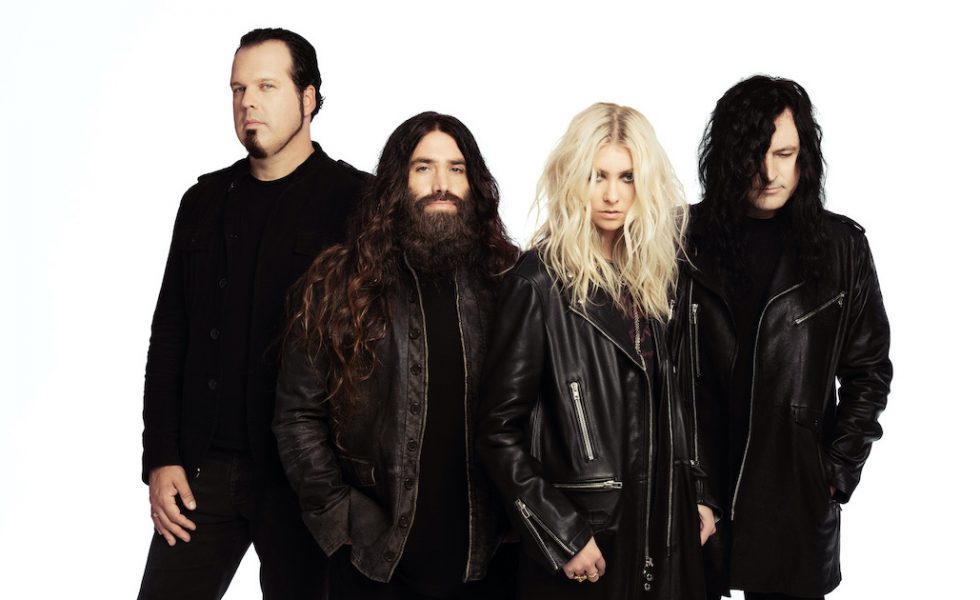 THE PRETTY RECKLESS // Turning Tragedy Into Something Beautiful

When Taylor Momsen was finally able to listen to Soundgarden “and have it bring her joy instead of just immense sadness”, Death By Rock And Roll wrote itself, she tells.

Taylor Momsen, The Pretty Reckless lead singer, joins Zoom for this interview and appears before a black background, which perfectly suits the tone of her band’s incredible new album, Death By Rock And Roll. She also resembles a young Debbie Harry–impossibly beautiful.

Given that Death By Rock And Roll was created under a suffocating cloak of grief–the band mourning the loss of not one but two close friends, Chris Cornell and Kato Khandwala–we can’t help but wonder how Momsen is coping with talking to the press about this particular record. “Some days it’s fine and some days someone will ask me the exact same question and it’ll just like hit me differently and I get a little choked up,” she admits. “I don’t think that I necessarily thought through the press aspect of it, like, ‘Oh, I’m going to have to kind of rehash and reopen these wounds that are still in the process of being healed.’ But at the same time, it’s my own doing–there’s no way to speak about this album without speaking about everything that we went through–so it comes with the territory.”

This scribe’s favourite album track right now is And So It Went, featuring Tom Morello, which is like an entire rock opera in a single song–sirens, majestic riffs, thunderous drums, twisted key changes and even a children’s choir. “It made a lot of musical sense for me to ask Tom to be a part of it,” Momsen explains, “because I thought that he’d come in, sound like Tom Morello and it would just tie the whole thing together. And it certainly did! He’s a wizard at his instrument–there’s no one like him–so I owe him one for that one. Thanks, Tom!”

Two thirds of Soundgarden–drummer Matt Cameron and lead guitarist Kim Thayil –make an appearance on another album track: the head-banging beast that is Only Love Can Save Me Now. When asked how she would’ve reacted, back when she first discovered Soundgarden, had someone told her this collaboration would happen in her future, Momsen offers, “I would’ve gone, ‘No, shut up! That’s ridiculous. Don’t even don’t tell me that; that’s not gonna happen.’ I never would’ve believed you. And so it was very–yeah, surreal is an understatement. I mean, obviously we were opening for Soundgarden on that last tour–that alone was just insane. I mean, when we got that phone call–that we were gonna be opening for them–I couldn’t believe it; my head exploded in almost the same way as when I first heard Soundgarden!” she laughs. “It was like, ‘This phone call can’t be real!’ Yet it was.”

“And so there we were, night after night, opening for you one of my favourite bands in the world; like, to me, The Beatles and Soundgarden are my bookends. You always hear, ‘Don’t meet your idols, because it can go south very quickly,’ and I’m always very cautious of that; I don’t want the reality to seep into what I’ve built up in my head. But that wasn’t the case with them. They are so amazing. I mean, Matt, Kim, Ben [Shepherd], Chris [Cornell]–they were all so gracious, kind, genuine, down-to-earth and just fucking cool! But then, like, when they pick up their instruments, you just go, ‘Woah, I don’t understand what just happened here!?’” At this point Momsen gestures so wildly that we can hear bracelets jangling (although her hands are out of shot).

And that was the nail in the coffin where I just went downhill real quick. I fell very downward and into this kind of hole of depression and substance abuse–and everything that comes along with grief and loss and trauma–and I didn’t know how to get out of it.
[ Taylor Momsen ]

“So it was an incredible honour to be on the tour and to get to know and love [Soundgarden] in a different, and a new, way. Obviously it ended very tragically, in that hit me incredibly hard–it hit everyone incredibly hard, but I was not emotionally equipped to handle that; like, I was not prepared for that kind of shock.” The Pretty Reckless’ dream run supporting Soundgarden ended abruptly when Cornell tragically died in 2017. But this loss was just the first of a “one-two punch” that would devastate The Pretty Reckless camp.

“I got to the place where I realised that I was not in a good space to be in public,” Momsen continues. “I took a step back and I cancelled touring and I went home and tried to regroup and process everything. As soon as I kind of got my feet back on the ground, I was calling Kato [Khandwala], our producer, and I’m going, ‘I’ve written a few songs, let’s get in the studio,’ and as soon as we started to put those plans in motion I got the phone call [to tell me] that Kato had died in a motorcycle accident. And that was the nail in the coffin where I just went downhill real quick. I fell very downward and into this kind of hole of depression and substance abuse–and everything that comes along with grief and loss and trauma–and I didn’t know how to get out of it. And I think really the bigger thing, the scarier thing, than that was that I wasn’t sure that I wanted to; like, I had kind of given up on life.

“And, as cliché as it may sound, it was music that was the thing that really brought me back to life … There was a time period where I couldn’t listen to records– like, anything I put on just brought back some sort of memory that I wasn’t ready to handle or deal with or think about–and so I kind of shunned music from my life. And I finally got to a place where I found myself needing it the same way I need oxygen, I was like, ‘I need music again’. So I started listening to all the albums that I grew up loving and kind of essentially rebuilding myself, brick by brick, from the beginning to where I am now.

“I was like, ‘Taylor, why did you start doing this in the first place? Where did this all begin?’ And the answer was very simple, it was The Beatles: first band I ever heard, first band I fell in love with, the reason I started writing songs. So I started there and I listened to every Beatles record and all the demos and the anthology and anything that I could get my hands on. And from that I just kind of went through all the bands I love–from Led Zeppelin to The Who to Pink Floyd to AC/DC and Bob Dylan, Neil Young and Jimi Hendrix and Eric Clapton and Cream and Oasis–and eventually kind of got to the place where I could listen to Soundgarden and have it bring me joy instead of just, you know, immense sadness.

There was a time period where I couldn’t listen to records– like, anything I put on just brought back some sort of memory that I wasn’t ready to handle or deal with or think about–and so I kind of shunned music from my life.
[ Taylor Momsen ]

“That was the first step and then I picked up a guitar and started playing music. I creaked the door open a tiny bit, allowing myself to think about writing, and as soon as I did it was like the floodgates just opened and this record just poured out of me in a way that I still don’t even really know how to express in words. It was very cathartic and it was like everything that I had been repressing and denying just overflowed. So I almost feel like I didn’t have to write this album–the album just kind of wrote itself–and by doing so it was really the first step of me getting back on track and healing myself and, you know, getting to a healthier headspace.”

Only Love Can Save Me Now was one of the first songs Momsen wrote for Death By Rock And Roll and she recalls, “It came out of a place of–I was so low and I was so desperate for anything to kind of save me, and help me, and what’s more powerful than love? And it was a song that I was really proud of and when we got into the studio I kind of inherently–just due to the riffs and the whole thing, I was like, ‘Matt and Kim would kill this and they would really take this song to its full potential’. So I gave them a rough demo of it and I called Matt and I said, ‘Will you listen to this and would you guys wanna be a part it?’ And they said yes. So it actually became the last song recorded for the record–just because we did it in Seattle, which was an incredible experience. I mean, we got to record it at London Bridge Studio, which is where Soundgarden made Louder Than Love and Pearl Jam made Ten and Alice In Chains made Dirt. So just to walk into such an iconic space–and not just be there, but be there with Matt and Kim–and creating something new after all this hell that we’d all been through … for me, it was a very beautiful, full-circle moment; it really just showcases the power of music and how it can really bring people together and you can really take tragedy and turn it into something helpful and something beautiful.

“And then on a light note,” she laughs, “I love [Matt and Kim] and getting to hear them play the song–I’m, like, hearing the song come to life for the first time, in real time–was just mind-blowingly incredible. The first time Matt hits a snare and the first note that Kim plays on the guitar– the whole song just exploded! I thought the speakers were gonna fall off the console. It was so awesome! And we just all kind of looked at each other and went, ‘Well that works. Sweet!” It was almost too easy. It’s one of my favourite songs on the record, which I shouldn’t say because they’re all like children, but that one will forever hold a very dear place in my heart. And it wouldn’t be what it is without Matt and Kim, so I certainly owe them.”

When Cameron and Thayil joined The Pretty Reckless in Seattle’s London Bridge Studio to lay down Only Love Can Save Me Now, it was the first time they’d returned to this studio space since recording Soundgarden’s Louder Than Love (1989).

The Pretty Reckless honour Khandwala’s memory on Death By Rock And Roll as well. It’s Khandwala’s recorded footsteps that we hear at the very top of the album and the closing track, Harley Darling, is also a tribute (“Oh, Harley darling, you took my friend, you took everything and now I’m alone again”).

“When I say I put literally everything I have into this record, I mean literally,” Momsen concludes with a grin.