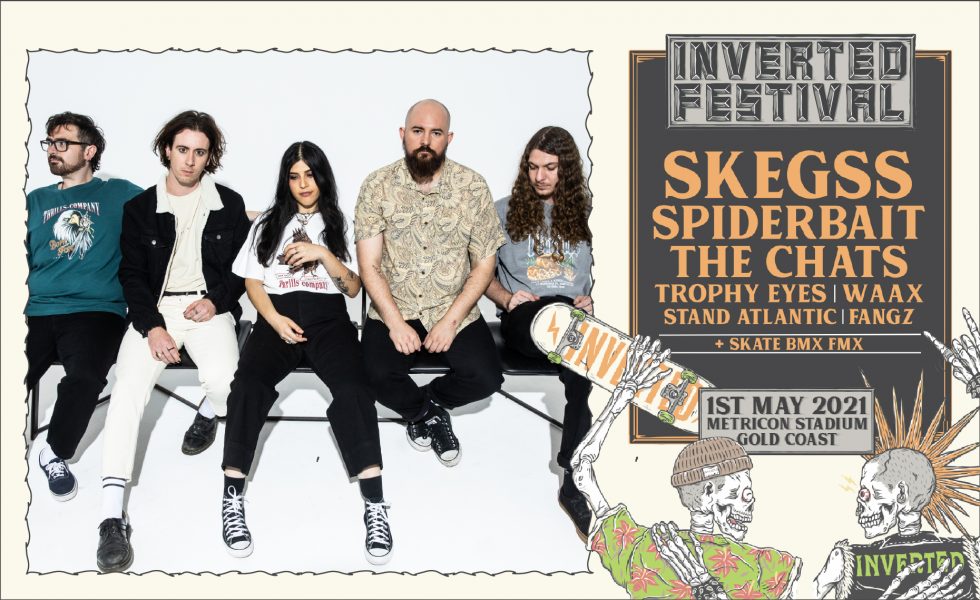 “The end of last year was pretty weird because we released music but none of it was actually our music.” laughs James Gatling, the guitarist of Brisbane punk rock heroes WAAX.

Having released their debut album, Good Grief in 2019, 2020 saw something different from the band-with them only releasing covers, including a killer rendition of Basement Jaax and swapping over songs with DZ Deathrays.

“It was great for us because we were learning covers for the Like A Version which was an experience we always wanted to do. It’s hard to get past Where’s Your Head At but everyone was suggesting songs and then as soon as Maz suggested Good Luck we immediately knew the direction we were going to take it. I feel like we did a good job because we tried to make it our own.”

“Then to be able to cover DZ and have them cover us, that was awesome.”

“To hear their version of FU just made us go, ‘oh fuck, I wish we did it like that.’ It was grimey and cool and I hope we did as good a job on their song.”

Expanding on why DZ have a sound that WAAX are in love with James remarked, “DZ have their guitars in really low tunings so we had to try and get some of the grunt of them as a band and try to replicate that. We all kind of felt like hitting it a bit harder so we really tried to step it up as well.”

Whilst 2020 may have shown a clear trajectory for the group, 2021 will be much different with their second full length record being recorded at the moment.

We’ll unveil some of the new stuff at Inverted Festival, I think that’s how it’ll go … the rest of the band hasn’t said that but I think it’ll happen.
[ James Gatling ]

“There is a new album in the works” he states. “We are still in the writing stage and at this point we are feeling really good about this batch of songs.”

“We’ll unveil some of the new stuff at Inverted Festival, I think that’s how it’ll go … the rest of the band hasn’t said that but I think it’ll happen.”

If you have been living under a rock and haven’t heard about Inverted Festival yet; it’s a one day event tying in all things punk rock, bmx, skating and fmx coming to Metricon Stadium in May. “We are super excited for that!”

“It’s going to be the first festival we have played since January 2020. We are just so excited. Metricon Stadium is such a huge arena and it’s at 100 percent capacity.”

“I’m very excited to see what it’s like because I’ve never really followed FMX BMX or anything so it’ll be fun to see. I think that it’ll be a good soundtrack to that kind of stuff, maybe someone will rip a gnarly backflip while we are there playing Labrador, I think that sounds cool.”

“We are just keen to get back out there and play in front of people and drink some beers in the sun with everyone.”

With it being the band’s first festival appearance in over a year, Queensland punters will be treated to an extra special set, while the rest of Australia waits for the Good Grief tour to be re-scheduled. “I know it’s on paper it’s cancelled but we are trying our absolute hardest to get back down and refill those rooms” James assures.

“It feels more like we are postponing it because we want to come down as soon as possible.”

“We are proud of being a band from Queensland but at a point you turn into an Australian band and not just a band from Brisbane. Now when we tour and go to all these amazing cities, especially Melbourne it feels like a second home because the reception is just incredible. We can’t wait to get back down.”