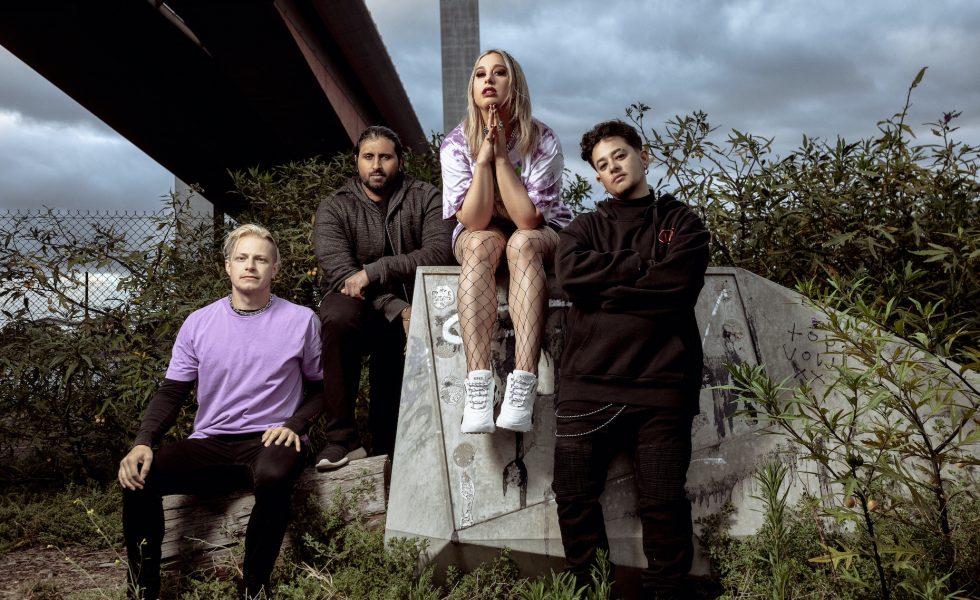 PREMIERE: THE LAST MARTYR // A Lesson Lived Is A Lesson Learned

Line up changes mid-2019, the release of their track Like A Ghost, coronavirus (of course) and then, the addition of bassist Ricky Andreas. After a tumultuous storm of events, The Last Martyr found themselves armed with the blueprint for what would eventually become their new single, Hindsight, a track which sees the Melbourne outfit  in the most secure and confident position for scene dominance they’ve ever been in.

Though Hindsight was ready to go out last year, not putting it out during the peak of the Covid pandemic was the right call for the band, lead singer Monica Strut says. “We had this song done in 2019, we were meant to put it out in March [2020] and literally, the weekend we were scheduled to shoot the Hindsight video was the same week Covid hit.

“It’s been one of the pain points–the whole of last year felt like our career was being stalled. Mind you, it led to us completely changing strategy and recording a whole [forthcoming] EP instead of doing singles.”

It’s not just what The Last Martyr have generated in their newfound soundscape that is what makes Hindsight so gripping–dabbling with more nu-metal and poking their fingers greedily into the electronica pie–but it’s the projection of a very exciting energy. In short, this song needs to be enjoyed in a live setting. The song’s regressive aggression, inhaled deeply only to be pummelled out through a cacophony of absolute and glorious mayhem, must be brought to the sticky floor of some bar and sweated out in a vengeful mosh pit. “We just announced a show with RedHook and FANGZ,” says Monica, outwardly satisfying her own desire to perform live once again with the news. “I’ve been friends with all of those guys and gals for the better part of ten years, so it’s really cool that our first show back will be back with friends and familiar faces. We’re actually going to be closing the set with Hindsight.

“After 18 months of not having been able to hit the stage, we’ve been hitting the rehearsal room so hard, and I think we’re literally going to unleash on stage.”

At that time, I was going through a breakdown of a close friendship with someone, and I realised this person had more power over me than what I think I released when I was in the midst.
[ Monica Strut ]

The backstory to the song, its unremitting character sparked by the fires of that wild energy, is summed up by Strut in one very apt phrase–“Hindsight is truly a bitch.” Love it. It’s arguably a mantra that pertains to every person who’s ever experienced anything negative. Step away, shrug it off, and repeat the wise words of Strut.

But what happened? Candidly, Strut begins by saying, “With my lyrics, everything I write is based off what I’m going through at that time or based off what I’ve gone through in the past. I don’t think I’ve ever written a song that wasn’t [about] something that didn’t actually happen to me or someone close to me.

“At that time, I was going through a breakdown of a close friendship with someone, and I realised this person had more power over me than what I think I released when I was in the midst.”

“It’s interesting, because I do think of myself as a very strong woman but being a woman in the music industry does come with certain challenges, certain hurdles that are quite unique to being of this gender. I was reflecting on this gradual progression–because it was a friendship and a working relationship–where my voice, unbeknownst to me, was getting quieter and quieter in this situation. From there, that was the catalyst for reflection.”

Looking at past romantic and platonic relationships, Strut considered other instances where she also felt she may have been suppressed unknowingly, and perhaps, becoming too submissive. A far cry from her natural personality, she says. “To me, there was an element of shame that came with realising that I hadn’t stood up for myself, but as I do say, hindsight is a bitch.”

“From the time that I wrote this song, I made a vow to myself that I would always stick up for myself, and I would always express my opinions, and if people don’t agree with that, that is absolutely fine, there is nothing wrong with people disagreeing, but I do need to have my say.”

You can hear Strut’s resolve, you can feel the absolution. She has conviction, and that should be appreciated. “Honestly, I do believe everything happens for a reason,” she says, “and there are no failures, just lessons.”

Hindsight, will be available worldwide on streaming services on 23rd April.