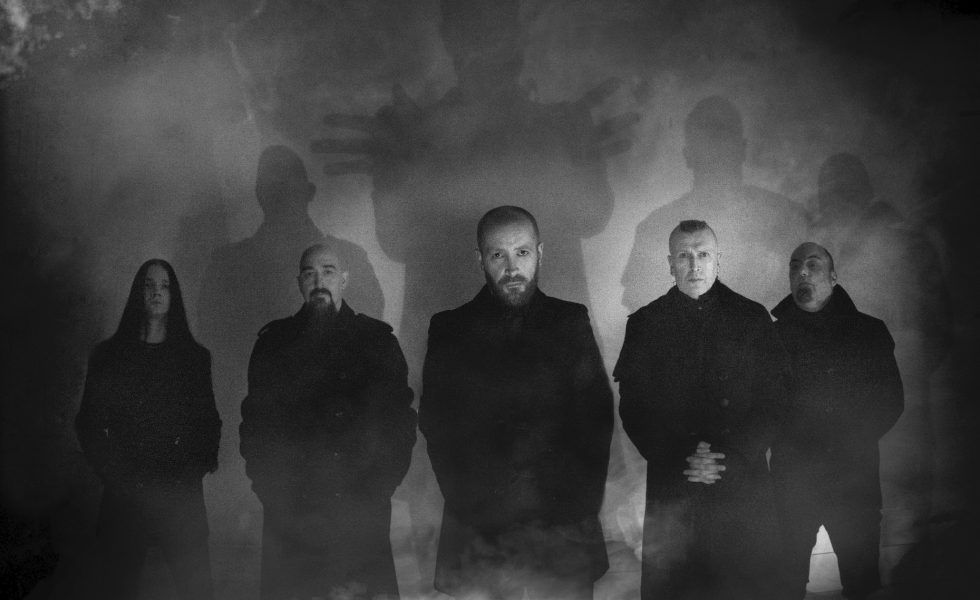 The expression “don’t judge a book by its cover” is an irritating cliché that nonetheless survives because it succinctly conveys one of life’s universal truths. Namely, that one should not base one’s opinion solely on early impressions.

For instance, one should not judge an album by its artwork (unless you’re Iron Maiden, of course). Neither should one judge a band by their physical appearance (where would Lemmy or every second death metal band be?). And after speaking to Nick Holmes, vocalist for British misery lords Paradise Lost, one ought to apply the same principle to singers and their lyrics.

That’s because Nick writes some pretty grim lyrics for some pretty grim music. He’s said so as much himself. In a recent media release to promote the impending new album, Obsidian, Nick described it as “one of the most eclectic albums we have done in some time,” adding “we have miserable songs, sad songs, slow songs and faster songs. Did I mention miserable?”

That won’t surprise fans. For more than 30 years, Paradise Lost have created music in a dizzying array of styles, from sepulchral death doom, to melancholy and melodic gothic metal, to electronica-influenced sounds–and yet, despite the tremendous variety in their output, one remarkable constant has been the abject sadness and tragedy of the music, given a voice in Nick’s bleak lyrics.

So it’s all the more surprising then when you discover that the dark art to which Nick gives a shape in the form of lyrics and music is, well … somewhat different to the real-life Nick Holmes.

His Twitter updates provide a clue. “You know you are getting old when you spray aftershave on your head, and not your face,” he said here.

Then there’s this gem. “My neighbour brought round a parcel that had been redirected to his house. When I answered the door, he told me my doorbell wasn’t working. Imagine his face when I told him my new doorbell was in the parcel! How we laughed!”

Life goes really fast when you start touring. Last year was like the blink of an eye. I don’t know why it does that. And it seems to accelerate as we get older.
[ Nick Holmes ]

Wait a moment … that can’t be right. Surely this can’t be the Nick Holmes? You know, the guy who, with his Paradise Lost co-founders, helped popularise death doom, that blackest of all forms of doom metal? Who then did the same for its accursed gothic metal offspring? An artist who makes music that has influenced countless extreme metal acts?

Given how much of the world is presently experiencing economic and social misery, courtesy of the COVID-19 crisis, you’d think that someone so steeped in anguish must surely have some dark reflection to make about the situation.

And indeed he does. His observation about purchasing alcohol at the local bottle shop (they call them off licenses in the UK) is but one of many sordid examples: “I had to remove some alcohol from my trolley due to rationing, which I fully understand. However, I did feel the need to point out that I wasn’t actually stockpiling, I usually buy that much booze for the weekend.”

Nick Holmes is not the doom lord you might think he is. Jokes aside, he is doing well, all things considered. He’s at home with his family. There are no shows scheduled for the immediate future, much like anyone else in his profession. And he’s busy with promotional work for the upcoming album.

“It’s like that gap between Christmas and New Year, isn’t it? just extended really,” he says. “I haven’t seen anybody but my family for three weeks. But it’s alright. I don’t really go out much anyway so it’s not a massive deal for me. I mean, my kids are eating me out of house and home, but apart from that, it could be far, far worse. There are people who are in far worse situations than what I am in, that’s for sure.”

By some measures it would seem that Paradise Lost are relatively fortunate. After all, they returned virus-free from a recent Ukrainian and Russian tour. By comparison, Chuck Billy from Nuclear Blast labelmates Testament recently told Hysteria how he, his wife, and various crew and band members were diagnosed with COVID-19 after returning from Europe. Among them was Death Angel drummer Will Carrol, who ended up in intensive care with a coma.

Yeah. This is 2020. Not contracting a deadly disease is, for many people, a source of genuine happiness.

So there’s that. And then there’s the other thing that may be considered fortunate: Paradise Lost opted not to delay the release of the upcoming album. In fact, it comes out on May 15.

As mentioned, it’s called Obsidian, and as the title suggests, it’s a fine slab of heavy darkness that takes many cues from its predecessors, 2017’s Medusa and 2015’s The Plague Within.

If you’ve followed Paradise Lost for a while you may know that the previous album is always the benchmark from which they begin when working on the next release. Indeed, second track Fall From Grace is somewhat evocative of Medusa and was, unsurprisingly, the first track written for Obsidian.

As the album progresses, though, you’ll find that it goes in all kinds of interesting directions. There’s a bit less emphasis on black, smoggy riffs from Medusa, and more room for eclecticism and variety.

Before you know it, you know, you’re getting to 50 years old. The thing is, you don’t feel any different in your mind, but obviously you’re just walking around with a saggy chin and a gut hanging out [laughs].
[ Nick Holmes ]

There’s opener Darker Thoughts, which lulls you into a false sense of peace with its acoustic strains. There are crawling tombstones like Fall From Grace and closer Ravenghast. There’s the bona fide goth rock-inspired Ghosts (“a guaranteed dancefloor-filler at any discerning goth nightclub” according to the media release). And throughout, almost anyone who likes Paradise Lost’s guitar-based stuff will justifiably find something to like, or which at least feels familiar.

As with previous albums, Obsidian was essentially written before any studio recording began. It’s a familiar and reliable process, according to Nick, and it also makes recording a unique process.

“Greg [Mackintosh, lead guitarist] calls it the jigsaw process, which I quite like,” says Nick. “He usually sends me about 30 seconds to a minute of riffs, so generally speaking he doesn’t really send a song. He tends to write the song around the vocal lines. So, I usually send him about six versions of melody lines … he just kind of vanishes for two weeks and then he sends back, touch wood, a song that’s all done, all around everything I’ve done. Then I’m hearing a song back that I didn’t even sing over really. It’s completely different to what I sang to it, so then I relearn it. And then I write the lyrics, right at the end.”

He calls it “a very unconventional way of writing” but one which leaves open many possibilities, such as coming up with unexpected vocal lines. “Doing it like that changes how you write,” he says.

The downside–at least as far as magazine reporters and interviewers like this one are concerned–is that there just aren’t any outrageous studio stories of craziness and revelry, or songs that come together under the pressure of jamming something out on the fly.

“When we get in the studio it’s all about recording. It’s not about messing with songs. By the time we get there, the songs are written. Greg also works out the drum parts, he’s meticulous with it. So, all we’re doing in there is recording and nothing else, basically.”

The result is a polished release that’s had plenty of time to ‘breathe’ and which, for the reasons just mentioned, will never sound rushed or half baked.

But no stories of studio debauchery.

When Obsidian comes out on 15th May it will mark a little over 30 years since Paradise Lost released their debut, Lost Paradise, in February 1990.

In this time, the band became central to popularising bleak, grinding death doom, as well as what is commonly referred to as gothic metal. There have been 16 studio albums (among them, several polarising electronic-influenced albums), well over a thousand gigs, and several million albums sold.

Most bands would be thrilled to have their name associated with one genre, let alone two. When asked in the past about the acknowledged influence that Paradise Lost have had on other bands, Nick has traditionally responded with modest words and how he doesn’t take anything for granted.

When posed the similar and perhaps inevitable question in this interview about what it’s like to be here after all this time, he once more responds in his down to earth, self-deprecating manner.

“Life goes really fast when you start touring,” he says. “Last year was like the blink of an eye. I don’t know why it does that. And it seems to accelerate as we get older, it’s weird. I mean, the only visual sort of bookmark I have is the fact that my children are adults now.”

He adds: “Before you know it, you know, you’re getting to 50 years old. The thing is, you don’t feel any different in your mind, but obviously you’re just walking around with a saggy chin and a gut hanging out [laughs]. Although, to be honest, holding the gut in at photoshoots, I’ve been doing that for 20 years anyway [laughs].”

These are the words from someone who did the vocals on some of the gloomiest music to ever make it into mainstream charts.

No, don’t judge a book by its cover. Even if it’s a book that appears to be about total misery.