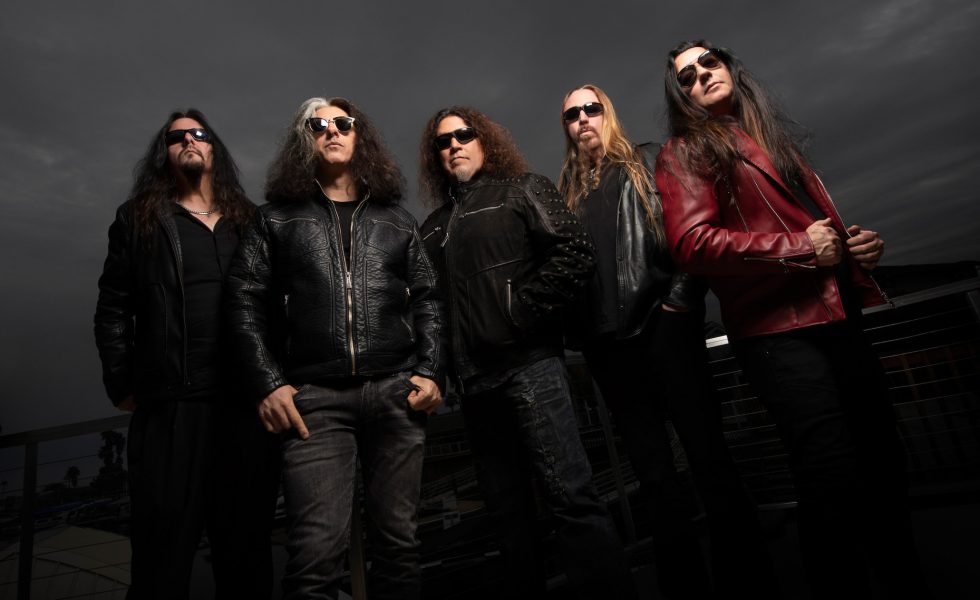 At 57 years of age, you’d probably be forgiven for thinking that Chuck Billy seems to be taking things easy these days.

With his wife Tiffany, the Testament vocalist now lives in Discovery Bay, an idyllic waterside community just over an hour’s drive from the San Francisco Bay Area. He no longer rides motorcycles, citing concerns over the growing hostility by car drivers towards riders. He enjoys a round of golf—and presumably never worries about fellow players mistaking his skull and pentagram-adorned ball for their own. And the gap left by the absence of a Harley appears to have been filled with a passion for recreational boating.

“My first boat was too big for where we lived, so I ended up buying a pontoon party boat,” he says when asked what kind of boat he owns. “The funny thing is, it’s made by this company Manitou but the model’s called the Legacy,” he laughs. “It was kind of odd when I got the boat. I thought, wow, the Legacy, yep that’s me, that’s going to be my boat, I’ll take it.”

Chuck may seem to have a relaxed outlook on life but don’t let that deceive you into believing that he’s gone soft. In fact, if anything, it seems to have had the opposite effect.

For instance, there’s the matter of his widely publicised recovery from a Coronavirus disease (COVID-19) diagnosis. Chuck had just returned from a European tour with Exodus and Death Angel when he, Tiffany and several band and crew members reported feeling sick. Chuck and Tiffany were eventually diagnosed but thankfully they recovered and at the time of this interview are “doing pretty good now and just taking it one day at a time.” By comparison, Death Angel’s Will Carroll was in a coma and spent two weeks in intensive care, though thankfully he too recovered.

No, Chuck Billy definitely has not gone soft. But just in case you needed any more convincing, have a listen to the new Testament album: Titans Of Creation.

Thrash metal, the way it’s meant to be

Three and a half years have passed since the last Testament studio album, 2016’s Brotherhood Of The Snake. Chuck says the time between drinks wasn’t meant to be quite so long; touring with a little ol’ band by the name of Slayer had something to do with it.

“We were going to start this record within two years after the first tour (Brotherhood) but then the Slayer Farewell tour came along,” he explains. “So, once we did the Slayer tour and we set aside time just to focus on writing and recording this record, we were maybe inspired a little bit from that Slayer run. When we were going to start writing, we definitely said, let’s write a record that’s a little thrashier.”

Indeed, Titans Of Creation is undoubtedly an album where the thrash part smacks you in the mouth from the moment you hear the opener, Children Of The Next Level. It’s a mid-tempo banger that’s instantly brought to life by Alex Skolnick and Eric Peterson’s galloping riffs. Gene Hoglan’s precision drumming and Steve Di Giorgio’s tight bass charge things up. And then Chuck’s distinct roar kicks in.

It’s thrash metal the way it’s meant to be. And yet, as you immerse yourself in the record, you’ll come across a couple of curve balls.

“Children Of The Next Level was the first song we wrote,” says Chuck. “So, we thought, maybe that was the direction that this album was taking. But once Eric started giving me a lot of the other songs, the moods definitely started taking a different direction.”

There are indeed elements on Titans Of Creation that are slightly out of the box. There’s bucketloads of melody. Eric Peterson contributes his own vocals on one track. Chuck does some vocal harmonies on another. There’s even a brief outro instrumental that relies heavily on *gasp* synths.

To call it experimentation doesn’t feel quite right for that term implies a certain not knowing what you’re doing. Undoubtedly, though, there was a willingness to push the blueprint. The result is an album that is faithful to the spirit of thrash, but which never seems to stand still.

This is all the more surprising, however, when Chuck concedes that, at first anyway, he was actually opposed to some ideas. The track City Of Angels, a slow-burner about the serial killer Richard Ramirez, is a case in point.

“Once Eric started giving me a lot of the other songs, the moods definitely started taking a different direction.”
[ Chuck Billy ]

“I was really fighting for that song to not make the record. When I first heard it, it felt really long and repetitive,” he says. “I’ve been working with songwriter Del James for a long time, and he said, let me hear the song. I played it for him and he said, try this, just see if this works. So we played it again and his lyrics were perfect. I went back home and I recorded it about two days later. I never sang it, I just kind of mumbled it out that day. So, once I’m out of the studio I actually found another texture to my voice.” Chuck is referring to vocal harmonies that appear in the song’s bridge section, something he hadn’t used before.

“So, it’s just funny that I was really against it making it onto the record and then it actually became one of the songs that stands out now,” he adds.

Another song that rates a special mention on account of its highly personal lyrics is the track The Healers. Another mid-tempo number with an almost epic feel, it’s a tribute to the traditional medicine men who helped him with his cancer battle almost 20 years ago. In that time, says Chuck, one passed away and one was in care with Alzheimer’s. The Healers therefore was a tribute to these men.

“I wanted to write a song and connect and pay tribute. I wanted to speak about what and how they helped me, what they taught me during that time. How they helped on that journey and through that battle,” he says.

It’s a fascinating story and it’s well-worth looking up the candid interviews that Chuck has given about this in the past.

Titans Of Creation appears to have garnered highly favourable impression in the few days since its release. This is obviously a good thing, for throughout the album creation process, Testament must have encountered the ancient dilemma faced by any band with an established discography.

Namely, do too much of the same and you end up stagnating, whereas if you deviate too far from what you’re known for, you risk alienating your fans.

If we’re going to be brutally honest, there are several items in the Testament catalogue that, even today, polarise fans. Yet much of the praise directed at Titans Of Creation seems to acknowledge the fact that Testament appear to have nailed the balance (plus, it sounds fantastic, thanks to the efforts of co-producer Juan Urteaga and long-time collaborator Andy Sneap).

Remember, Testament formed (as Legacy) in 1983, released their first album in 1987, and with Titans Of Creation have released 13 studio albums (yes, we’re counting the re-recording). Amongst other things they’ve faced adversity, line-up changes and, as you’ve read here, serious health problems.

Countless bands in the same situation would simply not last.

Yet not only are Testament still going more than 30 years after their formation, they’re also putting out first-rate, rock-solid thrash metal such as that found on Titans Of Creation. This is despite the fact that their entire touring schedule for the immediate future – yes, the tour that was meant to promote Titans Of Creation – is on standstill for the foreseeable due to COVID-19.

We ought to rejoice that bands like Testament are still giving us killer music.