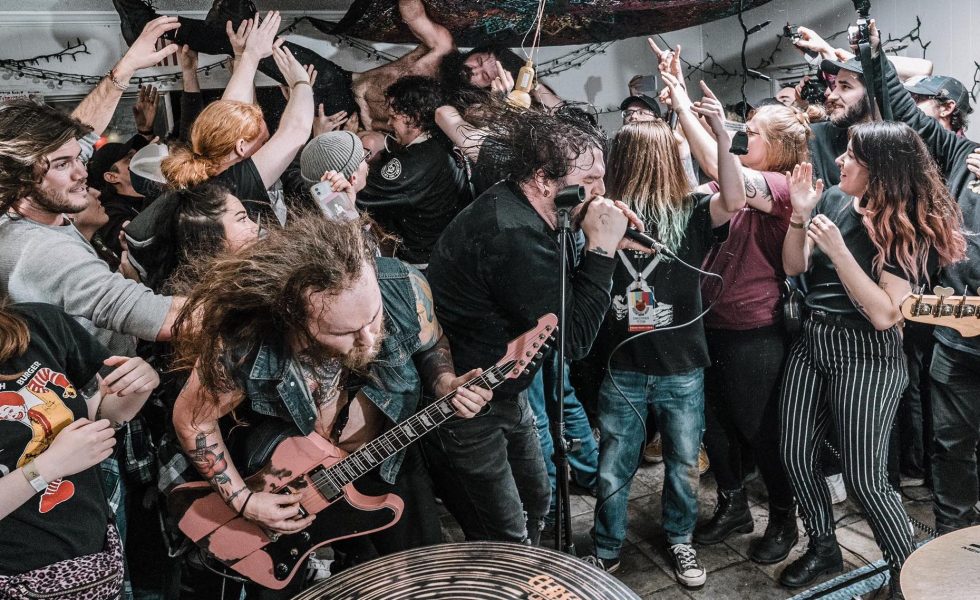 NORMA JEAN // In Service Of Rock And Roll

Metalcore giants Norma Jean have remained at the forefront of the heavy music industry for longer than many bands can even stay together, and with their latest album All Hail, the band have set out a masterclass in forward-thinking metal while keeping true to their roots.

MORE: KICK OUT THE JAMS WITH DREGG // OCEAN GROVE: A Slight Return To Earth REVIEWS: THE AMITY AFFLICTION: Everyone Loves You… Once You Leave Them // OCEAN GROVE: Flip Phone Fantasy // CODE ORANGE: Underneath // VIOLENT SOHO: Everything Is A-OK // AUGUST BURNS RED: Guardians // IRIST: Order Of The Mind // THE CHATS: High Risk Behaviour

Talking with vocalist Cory Brandan, the guys have been busy getting their proverbial shit together for a crazy year with some unusual preparation for a band of this scale.

“We just booked like eight or nine house shows and we played in like living rooms,” says Cory laughing. “We played in some girl’s bedroom, it was wild. So we just came off the complete opposite of anything we’ve done for a while.”

Norma Jean are not a band closely associated with small-scale house shows and DIY touring, due to their longstanding reputation as a world-beating, globe-trotting metal band of a certain calibre. But truthfully, this is a band who have always held a deep-rooted punk-rock spirit, and this is evident when speaking with Cory about their latest album.

“Back in the day we used to just record into a cassette on a boombox that was just in the room and that’s how we could listen to what we did that day,” says Cory. “Now we can actually mic everything up and track ourselves live … make changes and add things and build on it. You know just being able to organise and just put out a lot more content and just experiment and work faster.”

I’ve always sort of said that I don’t think music can have a belief; it’s a sound. If I clap my hand you can’t tell me if it’s Christian or not; or even Satanic or vegan. All of it is trying to put an emotion into a sound and that comes from people’s real life experiences.
[ Cory Brandan ]

“I mean it’s still us in the room, that same vibe; we’re still trying to experiment with deeper stuff,” Cory continues. ”With writing, we’re trying to match the emotion of what we’re saying to the song and vice versa. So that‘s a little more complex, but when you can record it and hear it back right away, you can make those adjustments too, so it’s not just technical side of things, we’re also able to pay attention more to dynamics–the up and down of everything, and that was huge for All Hail cos that was something we were really trying to get across.”

“I think one of the bigger things we did for All Hail is really we were just a lot more organised,” says Cory.

Norma Jean are a band who have survived partly through line-up changes and new blood, with multiple comings-and-goings over the years, however they have maintained a uniquely Norma Jean-sound without faltering through personnel shifts. Asked if the band notices changing expectations or reactions from audiences, Cory is clear-eyed about their response.

“Sometimes, I think, there is kind of this ebb and flow to it. You try not to pay too much attention to it, you know,” Cory ponders on what their audiences seem to expect. “I mean, we do,” he continues with a laugh, “but the way I’ve always seen it is we have a foundation to what we do musically and it’s like–if you like it–cool. We’re still gonna play songs from our whole catalogue; fans are fans in my opinion. I think it’s just important for us to be able to experiment, try new things, feel like we’re being challenged so it doesn’t feel it’s becoming boring and stagnant.”

“And I think if we did (repeat ideas) it would suck. We’ve actually toured with the idea of writing O God The Aftermath-style stuff but what we end up doing is just taking our favourite riffs and just trashing the rest, so it ends up just kind of scattered throughout … you kind of get a little bit of everything.”

Forever a band that trade in boldness, Norma Jean have again laid bare their Christian roots for the ever scrutinous metal scene to pick apart with All Hail, but this is not their first time round that particular maypole and the band remain hopeful that the agnosticism of their music lets people hear Cory’s stories in the spirit they’re written.

“It’s definitely in there for sure,” says Cory. “That’s still a foundation of what Norma Jean is, but it’s a personal thing. It’s like, that’s who I am. I’ve always sort of said that I don’t think music can have a belief; it’s a sound. If I clap my hand you can’t tell me if it’s Christian or not; or even Satanic or vegan. All of it is trying to put an emotion into a sound and that comes from people’s real life experiences. I never ever wanted to sound like, ‘hey this is what we believe and you should believe it too.’”

“Truthfully the message is there,” Cory continues after a thoughtful pause. “I write about what I believe in, and I just try to write it from real life, like something that I have experienced instead of a philosophy or an idea. When I write lyrics, I want to write something I can visualise, and really I’m just explaining what I’m seeing. I think that’s the best way to never have writers’ block: if you can envision the thing and you’re really just writing down what you’re seeing.”

As for any notion of writers’ block, Norma Jean have once again taunted that particular curse on All Hail with a sweeping and abrasive metal opus that retains the jagged, schizoid-bating ferocity of their earliest, gnarliest work.

“It’s almost like we wanted to come across like it’s not (pre-planned),” says Cory. “Every song we wanted to treat like its own thing. It’s a very visual thing; we like to see the record before we know it’s going to be anything. Until we do that we’ll just keep writing until something pops out that’ll kind of be the foundation for what the rest of the record is going to do.”

And Cory is quick to emphasise that this craft that he and his bandmates trade in is not meant to be a dour or depressing thing, and the band’s message should nary be mistaken for anything but a love for good-old, soul-filling punk-rock.

“It’s entertainment,” says Cory cheerfully. “I don’t want people coming to our shows thinking ‘it’s time to get serious cos we’re at the Norma Jean show and they’re going to talk about some serious stuff’, cos I mean–okay, we might; but it’s still a rock and roll show, let’s go!”

“I embrace that side of music so much,” he says with maybe a hint of wistfulness. “I did that very early in life, especially surrounded by a lot of punk rock bands who were very against that, and my whole thing was like, ‘well then why are you on the stage with all the lights facing you? You’re the loudest thing in the room; I’m being entertained right now, buddy!’ So I embrace that, I love all of it.”

“I want the music to shine, and at the end of the day it’s still rock and roll.”

All Hail is out now via Sold State Records 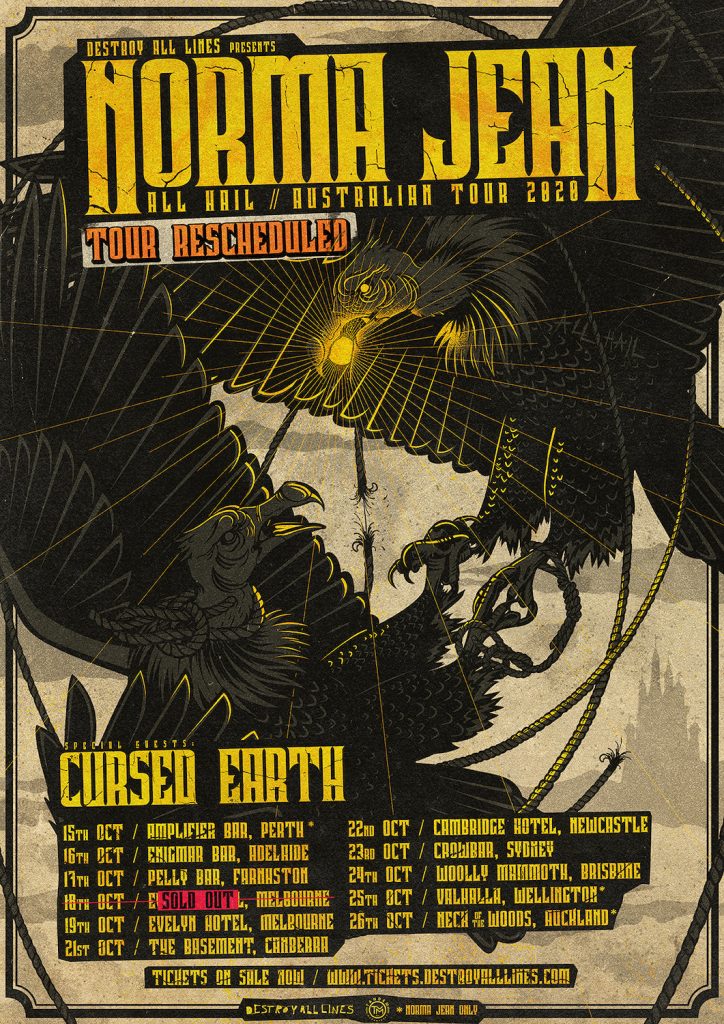