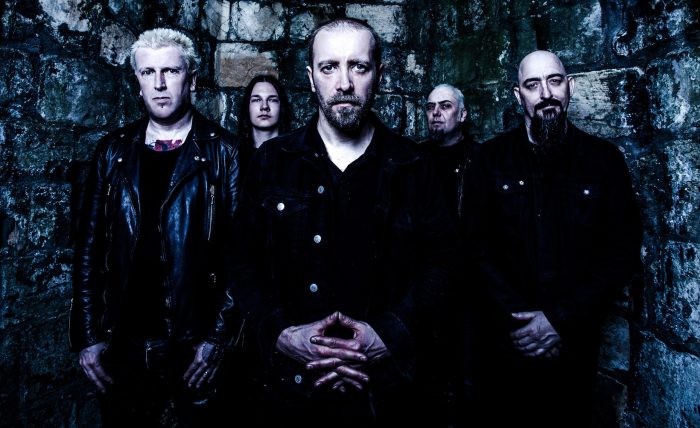 “Imagining that you’re a new band with no baggage. Nothing to lose, nothing to gain.” Greg Mackintosh, founder and statesman of Paradise Lost. Paradise Lost are fifteen albums deep in a career that’s seen them nigh-on invent the death/doom genre, lose themselves in an electronic fog, and return full circle as masters of the doom universe.

“You’re just 100% into it that moment in time. And I think that’s the only way we’ve kept it fresh for ourselves. Obviously, over the years you kind of try things and do things that maybe some people like, others don’t. ‘Cause you’re obviously never gonna please everyone.”

Please everyone they didn’t. New album Medusa, which we gave one of our highest scores of the year, is another brick in their impenetrable wall of quality. It began construction with 2005’s Paradise Lost, and climbed higher and higher ever since.

“I’ve just got to approach it without any kind of history,” Greg says. “Because as soon as you start to think about your own history, you’re kind of having a jaded view of your own existence, and then it affects your songwriting and everything. So, I mean the only way to have that kind of freshness and feel that hunger is if you just think, ‘Right, well I mean so, this is a brand new thing and let’s go for it.’”

I don’t know, over the last 15, 20 years, in metal, it’s become very the norm to just quickly put your songs together, edit it, and then replace all the sounds with samples or re-amping, or whatever. And that’s what people expect to hear. It’s strange. It’s like there’s a whole generation of kids that expect metal to sound that way. So when you play a real drum kit, they’re kind of shocked it sounds like that.
[GREG]

This led to a slew of albums that were Paradise Lost In Name Only, especially the critically and fan panned One Second. As Greg explains, they were by-products of rootlessness.

“When we did an album called Draconian Times straight after an album called Icon. And they’re very similar records because they were written simultaneously while we were on the road. And we were away from home for maybe four years while we did those records. Just tour after tour, and writing and writing. And when we came back from that, we were just a little burned out from that whole style.

“Hence, the One Second album, really. That’s exactly why that happened, because we were just tired of doing that … it felt like a conveyor belt. And we just wanted to try something that excited us and that was something just different. Just something that was different from the norm of what we were used to.”

Having two feet planted in the ground might have something to do with Medusa’s feeling of self-confidence and taste for renewal. The whole band being on the same page helped, too.

“It was one of the quickest records we’ve ever written, really. It only took maybe six months to write, whereas usually we took twice that. And I think that’s mainly because we had a very clear idea of what we wanted this record to be from the outset, which we don’t normally have.

“We also changed the way we song write on this record as well. I would send a couple of riffs to Nick, and I would ask him to do lots of different vocal lines, in different varying styles and varying melodies, and whatever, and send them back to me. And then I’d kind of snip it all up and start from scratch. We’d build it like a jigsaw. I don’t know if you’re aware of David Bowie’s lyric writing style. He had this thing where he used to write words down and then snip them all up and then throw them on the floor. And that was his lyrics, basically. So I thought it’d be interesting to try that out with music writing.

And it turned out to be really intuitive and really fast, because you can have maybe ten, 15 versions of one song on the go at once really fast. Whereas if you were just working on one concept for one song, you can spend weeks until you’re happy with it. So I found it intuitive and it proved to be the way to go because we got it done in six months.”

As for Medusa, the press is calling it their heaviest record to date. That’s PR fluff, surely? Or is it actually “the heaviest” they’ve done?

“I guess so, Greg says. “It’s the idea came from our last record, The Plague Within. The last song that we recorded for that was a song called Beneath Broken Earth, which is a real slow doom metal song, basically. And we hadn’t really approached that style for a while.

We’re just really pleased with how it turned out, and really enjoyed playing it live. And that was the brief for the new record. We just thought, ‘Yeah, let’s just do a full album of that stuff. Let’s do like a full-on doom metal record. But do it really organically.’

So the recording, for instance, we spent way more time getting the sounds than we did actually recording. Getting the drum sounds took three days, and it took a day and a half for the drummer to play all the songs. Because over the last, I don’t know, over the last 15, 20 years, in metal, it’s become very the norm to just quickly put your songs together, edit it, and then replace all the sounds with samples or re-amping, or whatever. And that’s what people expect to hear. It’s strange. It’s like there’s a whole generation of kids that expect metal to sound that way. So when you play a real drum kit, they’re kind of shocked it sounds like that.”

Don’t let them near a turntable, god forbid.

“Yeah, so our new album is very very organic, very real. You feel like in the room with it, so that makes it very heavy for a start. But you’re also gonna get a certain amount of people that are gonna say, ‘Well, that sounds a little weird,’ because they’re used to the very very clinical approach that have been adopted in the last decade or so. This is a little bit more of a retro sound, I guess you would say.”

Though PL are old school in the studio, they’re all modern gentlemen when it comes to new music. In fact, Mr. Mackintosh has a few recommendations for us:

“I’m a little bit of a Bandcamp troller. You know, I kind of jump from one band to another. I’m very into Bandcamp. It’s my favourite way to find out about new bands. There was a band called Black Tune from New England that really floated my boat, I heard on Bandcamp. Then they played not too far away from me. They came over from America and played at a city near me, so I went there. There was about 30 people there, but I loved it. And I went and bought a shirt and everything, and a CD. So they were really good. Implore from Germany, I really like. Graves at Sea are a pretty cool band. Pallbearer, who we’re gonna take on tour in Europe in September, October this year are a really cool band. Yeah, there’s quite a lot of exciting new stuff out there now. But you have to really look for it, ’cause a lot of the more mainstream metal stuff is still stuck in that clinical production and writing bubble.

It’s kind of the underground trailblazing at the moment, you know!”

Listen to the entire Paradise Lost interview on Hysteria Radio!

Medusa is out the 1st of September via Nuclear Blast Records. You can pre-order it here.

Tickets are on sale now.