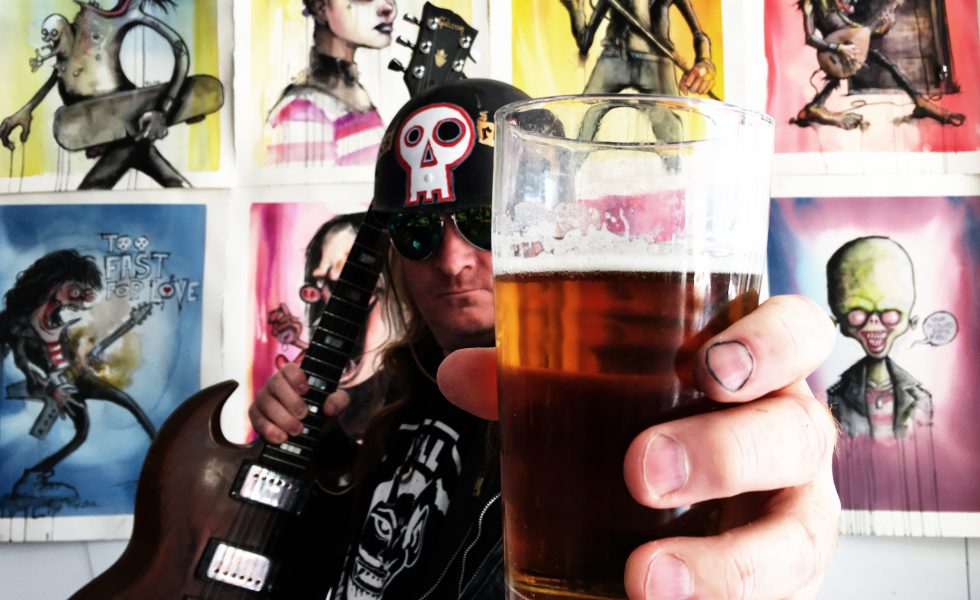 If you’ve spent any time in the Aussie heavy music scene, you’ve come across the twisted and demonic art of Mike Foxall. If you’ve not heard of Frenzal Rhomb, Hard-Ons, or Barbariön, we invite you to look at your life and look at your choices.

Hunkered down in his studio somewhere in the petrol and rubber smelter of Bathurst, New South Wales, he’s created countless gnarly pieces of art for band t-shirts, animated music videos, posters, album covers, and anything that needs a dab hand with lines and paint. Such as cocks and balls on pub toilet walls (his words.) He’s done it for the bands already mentioned, Darkc3ll, Smoking Martha, The Neptune Power Federation, Totally Unicorn, Cosmic Kahuna, and the venerable and venerated Batfoot. Collecting so many stories from bands big, small, and in-between, he’s compiled them all in a new comic anthology, Speek Evil. An “illustrated rock n’ roll periodical“, it’s a quarterly zine filled with comics, art, and other rock n’ roll arty-facts. Get it? Yeah, thought you might like that one. We spoke to the man himself, buried deep in the Foxhole (not his words).

Hysteria: So what’s Speek Evil, in a nutshell?

Mike: I sort of pictured it as kind of rock ‘n’ roll stories, I guess you’d call them. Some of them are written by me and some of them are written by other people. So I’ve got people like Ray Ahn from the Hard-Ons, and Michelle Madden, Mick from Grindhouse, just different sort of music people telling me stories from their past or favourite gigs, or tour experiences or whatever. Then I illustrate them. Some of them are just comics I have made up, but that’s sort of the ballpark. 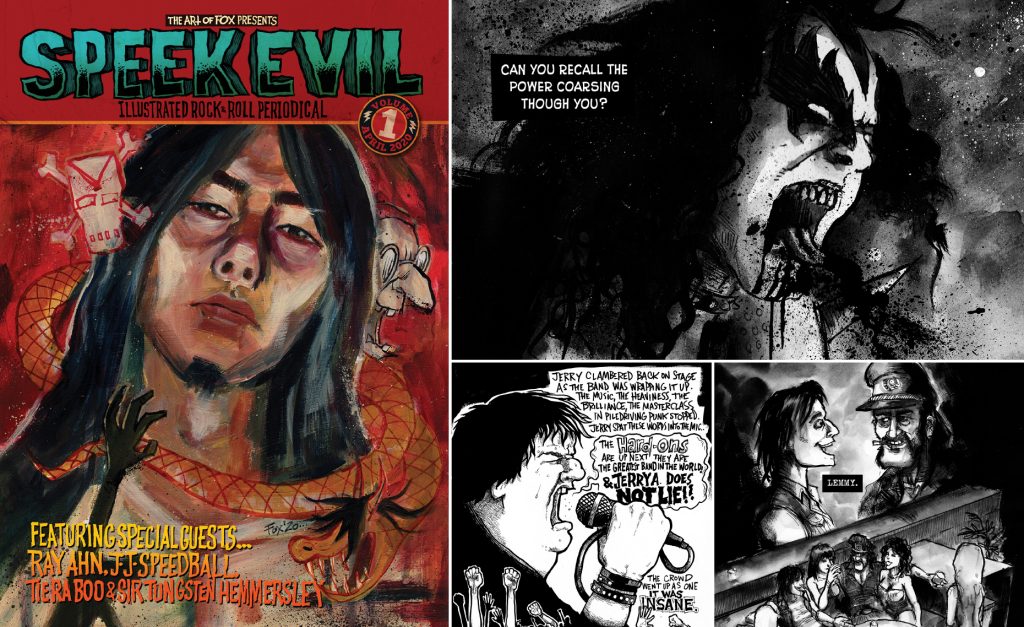 I’ve been doing it for ages but it really sort of kicked up a notch in the last, I don’t know, five or so years, but the very first one I did was from Frenzal actually, way back when, Never Had So Much Fun. That was actually the first animated clip I ever did; it was for them. And sort of one thing led to another. I used to obviously do them for my bands (Nancy Vandal) as well, so that was sort of like my necessity, then other people asked to do it for their bands so it’s just grown over the years basically.

[My art’s] not necessarily the kind of stuff being exhibited at art galleries. The t-shirt is a way of exhibiting the art, the same as album covers and all that stuff; flyers and what have you.
[ Mike Fox ]

Metal and crazy out there comics has always gone hand in hand, Todd McFarlane drew album covers for Iced Earth, for example. Like Tony Iommi said—we have scary movies, why not scary music. So why not scary artwork?

Yeah, I’ve always thought they kind of go hand in hand, the comics and the metal and sort of the underground rock stuff. Even if you think of the sixties, underground comic artists were often doing their own covers back then, in the seventies like Frank Rosetto was more of like a traditional artist, but he did lots of album covers for KISS and bands like that. I’ve always seen them to go hand in hand, and yeah because I write music and draw comics I’ve kind of got a foot in both camps anyway, so one kind of informs the other anyway. I find the visual arts stuff inspires the music, and especially lyrics and vice versa. When I write music, it kind of generates art as well, it’s a symbiosis. 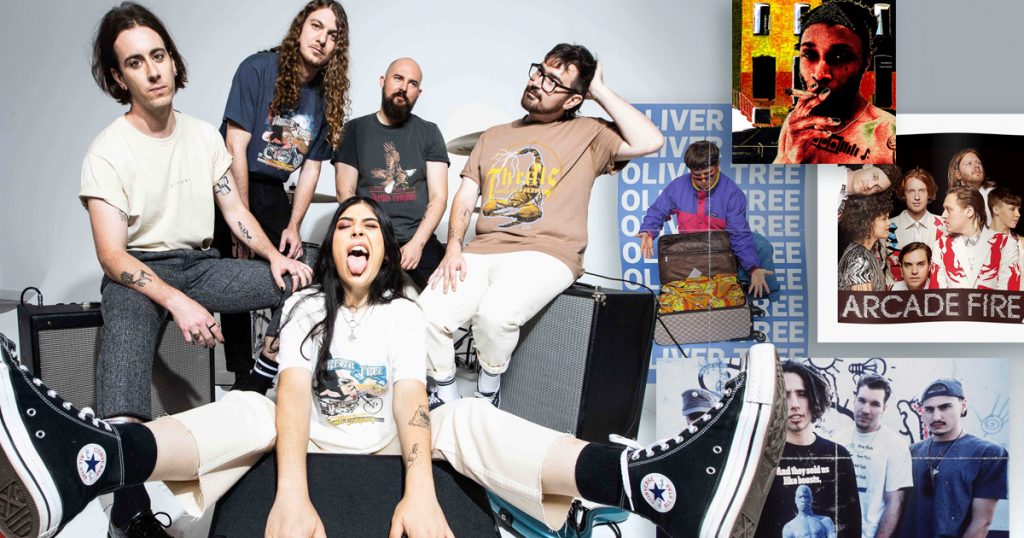 Is it a bit of a trip to see your art on a t-shirt? That there are people out there acting like walking, breathing galleries for your work?

Yeah, totally. I love my ‘art’, but I do love like the underground art. I like to say my art is ‘lowbrow art’. Not just mine, artists like myself I think. I think that kind of ties into what you are saying, it’s not necessarily the kind of stuff being exhibited at art galleries. The t-shirt is a way of exhibiting the art, the same as album covers and all that stuff; flyers and what have you. I get what you’re saying, because I love the idea that they are out there walking around. I think to further that, when people are choosing to wear a band t-shirt, they are choosing to champion that particular artist or designer, like they are curating their own art gallery by choosing what they are wearing on that particular day. I think that the little ecosystem of art and music and fashion is really cool.

When bands approach you for a t-shirt or poster, do they have an idea in mind? Or do they just like what you do and trust your judgement?

It depends. I think they do have some idea; maybe they have a song name or something to latch onto. Others do get quite specific and have something in mind which is cool as well, I mean like that Smoking Martha one for example; that was their idea, to have the voodoo doctor thing, cause they were on that kind of vibe. Whereas other bands might say “just do something”, or I might have an idea based on their music or a song lyric or something. I think most people I work for are pretty flexible really, they kind of let me do my thing, which is cool. No one has come and asked me to do something that is completely out of my wheelhouse, so they obviously come to it with a certain expectation that I do certain types of things.

What else is unusual is that Speek Evil is available via yearly subscription. Why did you decide to go down that route instead of say, Patreon?

A lot of people asked why I don’t do something like Patreon. I was thinking in my head like, “what could I do to make it worth someone to contribute, like a monthly fee or whatever the Patreon is.” I couldn’t really think of anything and then that kind of led me to, “what if I did a magazine and try to get a subscription so I could do a fair chunk of them and also make it worth their while?” I didn’t want to make it too pissy like a single magazine; it’s not worth the effort. It’s a bit of an experiment really. I’m not sure if it’s normal. If it’s not what people do, but I mean it worked OK and I’ve just got the first volume out. People are talking about it, so that’s really cool. Now I just have to keep myself motivated to do the remaining three. I’ve got a couple ideas for all of it, but I also need to generate some new ideas over the year, but I have a whole year to think about it, so hopefully it will work out!

This brand new quarterly zine is being launched by The Art of Fox, whose work has adorned the Australian rock and roll underground in the form of posters, album covers and music videos for over 20 years. Pre-order your subscription now including the first 4 volumes, along with some great additional rewards such as full-colour posters and even bonus Speek Evil playing cards!http://bit.ly/SpeekEvil

Posted by Pozible on Thursday, 20 February 2020