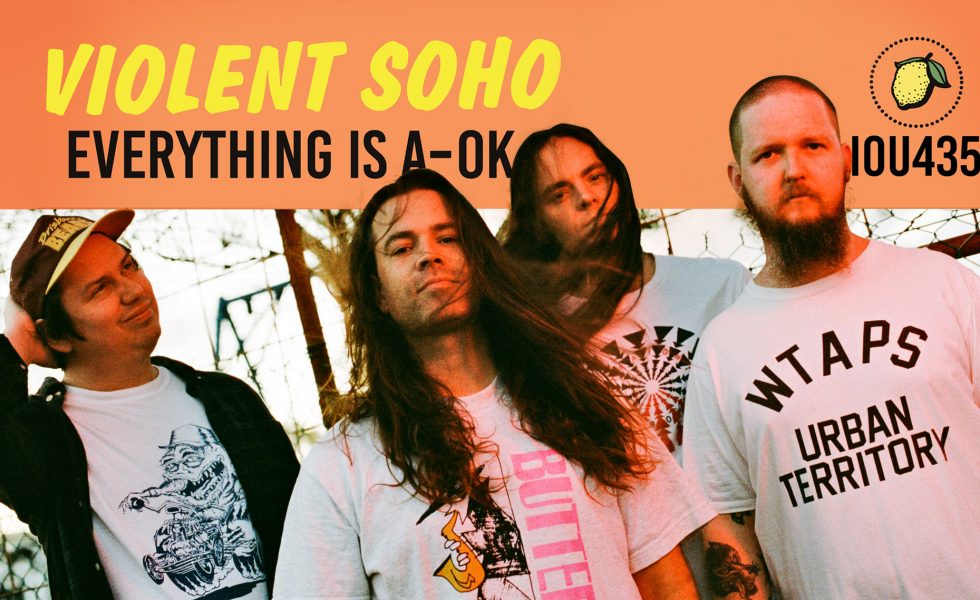 VIOLENT SOHO // Rock In The Time Of The ’Rona

Apr 03, 2020 / WORDS Owen Morawitz / PHOTOS Ian Laidlaw / When all is said and done, we can always count on these good blokes.

In this, the Year of Our Lord 2020, amid the fallout of the Great Dunny Roll Riots, you’d be hard-pressed to find an album title more ironically prescient than Everything Is A-OK.

While we don’t think Violent Soho necessarily had old mate COVID-19 in mind as the preferred background noise for the upcoming release of their fifth LP, the advent of this full-blown global pandemic has had at least one unexpected benefit: a sudden surplus of newfound free-time, huddled inside four walls, with increased proximity to hi-fis, headphones and Internet connections. Who better to guide us through the existential pitfalls of our current crisis—or, say, the sheer boredom and frustration of mandatory self-isolation—than the rocking dulcet sounds of Mansfield’s finest?

Perhaps by coincidence, the mundane reality of this crisis is something James Tidswell knows all too well. Speaking to Hysteria from his Brisbane home on a lazy Thursday afternoon, we kick things off by asking how the band’s guitarist is weathering this looming apocalypse. “Well, I’m actually in quarantine. Or, self-quarantine—whatever it is—as I wait for my results,” he replies with an uneasy laugh. “I was contacted by New South Wales Health a few days ago, and they said that I’ve possibly been in contact with people that have tested positive. I was raced through to being tested, my wife was sent home from work, and my daughter was sent home from school. So, here I am, waiting to find out whether or not I got it.” Despite a level of uncertainty and anxiety surrounding his test results, the ever-affable Tidswell is also quick to note that being forced to stay home isn’t all bad. “What’s crazy is I’m always in self-quarantine. Like, I don’t even leave the house; I didn’t even know that the toilet paper thing was for real,” he laughs. “The one time I leave my house to go to Sydney, I come in contact with some stranger, and now I’ve got corona.”

What’s crazy is I’m always in self-quarantine. Like, I don’t even leave the house; I didn’t even know that the toilet paper thing was for real.
[ James Tidswell ]

For all the pessimists out there, these are indeed trying times. People are dying, the world as we know it is grinding to a halt, and shit is most definitely getting real. This too is a feeling that Tidswell acknowledges, as he reflects on the title of their new album and its strange resonance with current events. “As a band, after 18 years, we were kind of surprised that we’re still here, more comfortable and more relaxed than ever. But when we looked at it, we were like ‘Everything’s clearly not A-OK in the world,’” explains the guitarist. “So, it became like ‘Well, how do we convey this message?’ Kind of like the meme of that dog sitting in flames saying, ‘Everything’s fine’?”

This bleak outlook brings about a shift in conversation, as we pivot to the band’s rise to the top of the Australian charts over the last decade, with an ever-increasing profile that includes #1 album debuts, ARIA awards, Triple J Hottest 100 accolades, headlining festivals and sold-out tours across the country. How exactly did they pull it off? “The idea is to meet people where they’re at, and we’re not in control of where anyone’s at right now. I think today’s worries are not necessarily for all of us,” explains Tidswell. “We definitely try and serve it up in a very palatable way for the masses. As in, ‘If you just want to drink beer and not listen, you don’t have to. You can still have a good time. But if you want to scratch deeper in your own way, there’s something more there.’ And I think that, with this album, that was kind of the hardest part to work out.”

After recording 2013’s Hungry Ghost and 2016’s WACO at The Shed in Brisbane, a local studio that has sadly kicked the proverbial bucket (RIP), the process for Everything Is A-OK required getting firmly outside of the group’s comfort zone. Decamping to The Grove Studios in New South Wales, the band settled on working with Australian producer Greg Wales (You Am I, Sandpit) for their fifth album after using some unexpected selection criteria. “Well, I mean, he made a record for a band called Jumpstart from our school in 1997. And there’s not many bands from our school; I must say,” Tidswell recalls with a chuckle. “He comes from a time when records were made in a more traditional sense, I guess. His main job is actually working at Triple J, and these days he does all of the Like A Version recording. So, he’s used to working with bands that rock up, each week, doing a cover of all different styles and having to do it on the spot. I mean, he’s one of our heroes.” It’s this level of versatility and self-assuredness, galvanised by the presence and direction of Wales, which makes Everything Is A-OK the definitive Violent Soho record: loud, proud and supremely confident. “He did what no one else could have done. I mean, the engineering alone was incredible,” says Tidswell, with a noticeable hint of gratitude. “We’d have eight microphones set up to record one guitar. It was all around the room, and then we’d have faders in the room where we’d blend and mix them together. And I think you can really hear that it’s a huge step up in how it’s captured [our] sound.”

I like to think that people feel sort of a part of our band. Because there is no curtain
[ James Tidswell ]

And it’s those qualities of Violent Soho as a well-established musical unit that Everything Is A-OK fixates in the listener’s mind: the alt-grunge rhythms of Vacation Forever; Canada’s ode to middle-age escapism; the high-energy slacker anthems of Pick It Up Again and Lying On The Floor; Slow Down Sonic’s lamenting rollercoaster of emotions; the fleeting satisfaction of catharsis on Shelf Life. However, when we ask Tidswell about why the band’s music still resonates with fans, eighteen years on from the band’s inception, the answer is a surprisingly honest and humble one. “I like to think that people feel sort of a part of our band. Because there is no curtain,” he admits after a moment of contemplation. “We are the people in the crowd. And I know that bands often say that, but I think we are one of the only bands that don’t have fans—we literally have supporters.” Talk then inevitably circles back to our current crisis, as the guitarist stresses the impact the band’s supporters have had on the dynamic of Violent Soho itself. “At the moment, with what’s going on, everyone’s turning to live streaming to post their shows and that sort of thing. But we can’t do that because our live show isn’t 60, 65 or even 75 per cent—it’s the crowd themselves,” says Tidswell. “I think we’re one of the only bands that you see where everyone rocks up already wearing the jersey. And that’s not lost on us, you know? We feel like the little band that could, and that’s because of the support that we get. We’ll never take it for granted, and we’ll keep being as honest and as true to ourselves, and as true to where we’re from, as we possibly can.”

In these dark times, when all is said and done, we can always count on the good blokes in Violent Soho to be our glimmer of hope in the darkness. “With Everything Is A-OK, it’s kind of just how we’re all feeling in society at the moment,” says the guitarist. “We’re constantly told to plough on. You know? To just keep going. But then this [crisis] sort of just happened and it’s really put everything into perspective for us.” As Tidswell rightfully recognises, ultimately we will get through this crisis, just like we always do. And thankfully, when the chips are down, and things look more than a little hopeless, we can always evoke that ready-made mantra of apocalyptic self-affirmation and fireside optimism: Everything Is A-OK. “I’d like to think that Violent Soho, as a band, has the message that you are enough; that we’re all enough. If we get to do what we do by just being us, then you can be you too, and you shouldn’t be anxious about it or feel that you’re not enough.”

Everything Is A-OK is out now through I OH YOU.