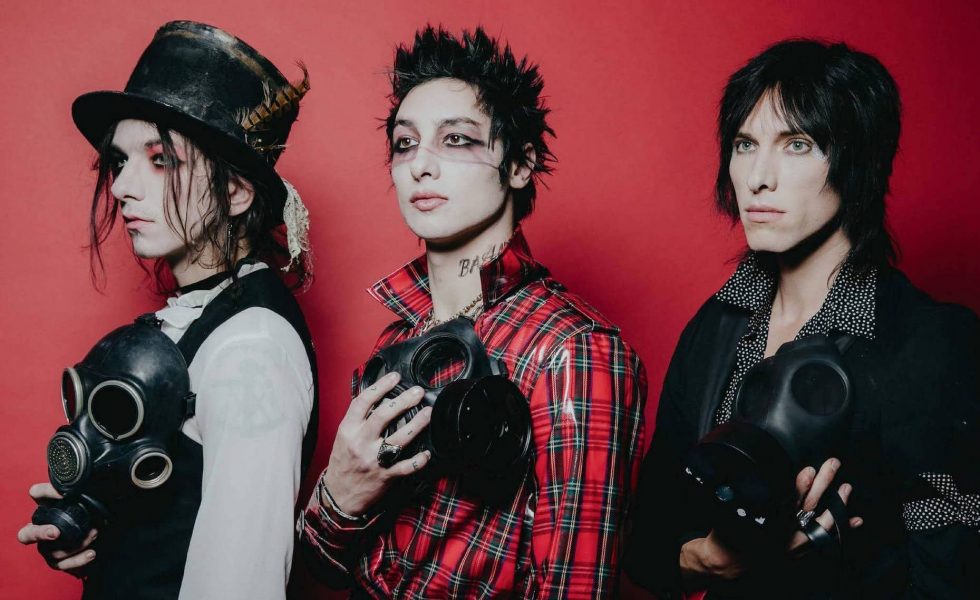 The year is 1888, the island of Obsidian serves as a refuge for free thinkers and artists, only to turn into a place overrun by an evil political power that suppresses creative freedom. And so goes the tale of The Bastards, the third studio album from art rock renegades, Palaye Royale.

“It’s a little bit different to some of the stuff we’ve released,” says the band’s vocalist, Remington Leith. “We wanted to make an album that was pure honesty, getting uncomfortable touching on a lot of these subjects.”

Rife with foreboding dystopian elements, Palaye Royale have addressed the stifling of the arts and the push down on individuality with an explosive soundscape that could only be attributed to them. The evolution in sound and narratives Palaye Royale share were, Leith says, a completely natural concept to them, having experienced such suppression throughout their tenure and only ever wanting to be completely truthful in mirroring their experiences. “I wanted the record to be completely honest–the songs that will help people and will truly stand the test of time are just complete honesty,” he says.

The album discusses the experiences of the exiled creatives on Obsidian, and discusses the suppression by a greater power of the free thinkers. In the real world, Palaye Royale attest they too have felt creatively stifled. “I feel like I was set on a path–to go to school, get a job, start a family, to go the typical path–I was pressured to do that. I wanted to break the mould and do something creative.

We created this world in our heads when we were kids, pretty much, now it’s getting a lot of attention because of what we’re going through.
[ Remington Leith ]

“I think we looked at each other and were like, ‘No. We want to create our own path, our own destiny. If I’m gonna fail, I’d rather fail as me.’”

Ultimately, Palaye Royale overcame any pressures for adhering to the status quo. “Obviously we still have our hurdles in front of us,” Leith reasons, “but yeah, I think we all know we wanted music in our lives forever.

“Like a lot of people, we’re doubters–are we sure? Is this okay? Is this the path we want to take?–but honestly, I couldn’t imagine my life without music. That would be a sucky life for me!”

Three years ago when the band began writing The Bastards, Leith strongly agrees that he never could have conceived the fictional dystopia they created would ever become their dystopian present. “No! It’s shocking. We wrote this story, which was gonna come out with a comic, about seven years ago, leaving little Easter eggs in music videos and stuff.

“It’s crazy. It’s wild to me that this story we wrote in our fucking backyard together is becoming, like, people really have interest in it and it’s the wildest concept.

“We created this world in our heads when we were kids, pretty much, now it’s getting a lot of attention because of what we’re going through.”

Tracks like Little Bastards, Anxiety, Tonight Is The Night I Die, demonstrate Palaye Royale, arguably, at the best they’ve ever been musically. They display such dexterity and such evolution in their sound that its hard to miss the disdain, passion, and volatile delivery. “We’ve lived with these stories, they came from a place, like our childhood and the way we grew up–we’ll always have a passion for it but we kind of rewrote our history in a way.

“It’s easy to tap into those emotions–when I’m on stage or in a vocal booth, that’s like my therapy. I’m still one of those fucked up people going through shit inside but I’m like, I’ve got to get it out somehow.”

The negative concepts of this fictional dystopia do, for better or for worse, transcend time and are felt today–a happy accident. It’s not a stretch, therefore, to assume that in Palaye Royale utilising elements from several genres within The Bastards, they’re saying the situation now, the situation they’ve imagined, is universal for all types of creatives, all types of musicians. “I would like to think so,” Leith considers. “Pretty much our whole lives, some things are not gonna work. Five years ago, playing the Sunset Strip, we had naysayers saying ‘Rock’s dead, it’s never coming back’. The thing is, that’s the music we wanted to play. We had so many people tell us this wouldn’t work but it is working. You get this attitude where it’s almost like, I believed in myself and I was right.

“No one really knows what could be the best and what people will gravitate to, but I feel like honesty is the best form that you can be and there’s only going to be one you, so I might as well be that.”

“We definitely have inspirations and stuff but we never wanted to emulate anybody. The fact that it’s working just goes to show you can be yourself and use your ideas, and if you follow what’s inside you, you never know who that’s going to translate with.”