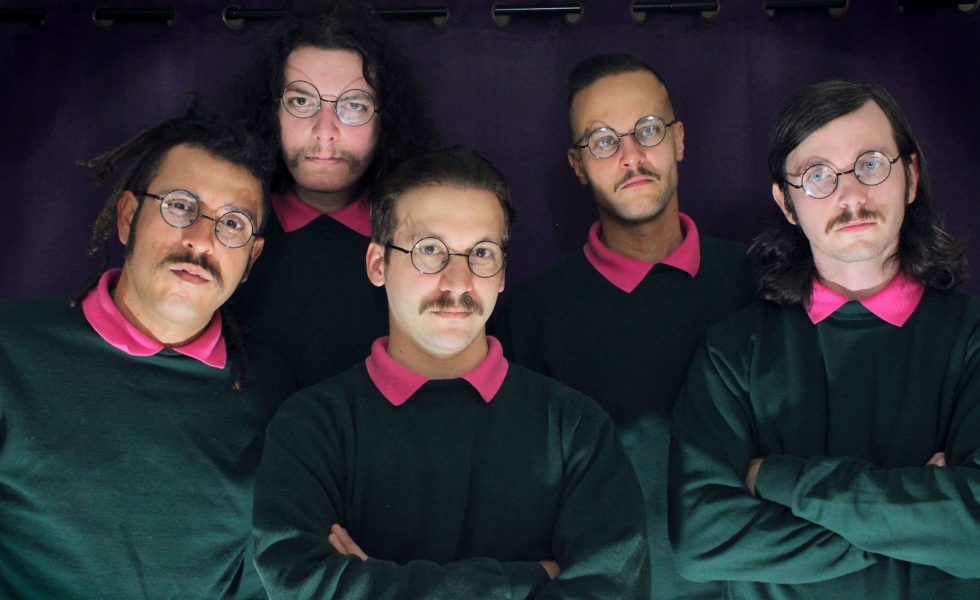 Springfield isn’t big enough for two Simpsons themed metal bands … lucky for both of them, they live on opposite sides of the world.

Phoenix, Arizona metalcore and apple cider aficionados Okilly Dokilly rose to prominence last year as a Ned Flanders themed—that is dressed to look exactly like the stupid, sexy, Beatles worshiping, Bible thumping, Homer Simpson neighbourino—after a featured performance in the credits of their favourite show in the whole wide world, The Simpsons. Who better to get in between Neddy’s noggin than Dr. John and Dr. Lover of Simpsons themed doom band Dr. Colossus? Strap your smile-extenders and get ready for some Neducation with singer Head Ned. As a Nachos (Flanders Style) treat, we turn the tables as Head Ned gives Dr. Colossus the once over.

Head Ned: Absolutely-doodilly! Plain popsicles, the smell of printer ink, mosquito bites, they sure are fun to scratch

Band members regardless of how similar they may look all have different tastes – but whats one record you can all enjoy together?

The rest of the Neds and I all have a pretty wide array of musical tastes. Fittingly, a couple Beatles records could fit that answer. Sgt. Pepper’s or Abbey Road definitely. Credence Clearwater Revival’s hits album has gotten a lot of plays in Ned Vanders. We also thank the Lord every day for Sweatin’ to the Oldies, volumes 1, 2 and 4.

Ever see a man say goodbye to a pair of shoes?

Apart from a boot up the bum, what are you most looking forward to experiencing in Australia?

A few games of knifey-spooney would be cool. I’m told we might also see a horrifyingly large spider or two, which sounds fun. Overall, we’re looking forward to the shows and chatting with fans. It’s wild to go to different places and see first-hand how a singular TV show influenced so many people all over the world.

What’s your least favourite comment from fans and why is it “I’ve got an idea for a song you should do.”

Ha, because half of the suggestions are song ideas that we’ve done already.

Have you got any ideas for songs we should do?

Yeah, I’ve got an idea for a song you should do. You guys could inspire a pretty wild mosh pit with a song about Bart spinning his arms and Lisa kicking her legs while the two move toward each other. You could call it ‘If you get hit, it’s your own fault.’

The Flanders attitude is a big part of that. Being overwhelmingly optimistic and ridiculously positive comes in handy, especially if anything goes awry on tour. On our last tour, our van had a bunch of issues, then eventually broke down for good. We always focused on making a plan and working as a team, and found a lot of consolation in thoughts like, ‘well, at least we don’t have to worry about that slight oil leak anymore.’ There’s a lot of comfort in knowing that whatever happens, at the end of the day, we’ll all be okilly dokilly.

Who is responsible for laundry at the end of your shows… and on that topic… how many days in row have you worn your outfits unwashed?

Oof. Laundry is a battle. Five Neds versus a lot of sweaty sweaters. Each Ned has five sets of the outfit, so we’re able to stave off the need to do laundry for a few days. On winter tours where it’s not terribly hot, I can get creative with some Febreeze and make an outfit last three shows max. On summer tours in humid spots, 1 wear qualifies the sweaters for the hazmat bag. Each Ned washes their own, so sometimes it’s a race to the one working washing machine at a hotel.

Favourite band appearance in the Simpsons?

There’s a lot of comfort in knowing that whatever happens, at the end of the day, we’ll all be okilly dokilly.
[HEAD NED]

No one has ever asked you this I’m sure, but what is your favourite era of the Show?

The early seasons are definitely up there. Season 8 is my favorite and anything in the first few years is really great. You could throw on just about any episode from any season though and I’ll stop what I’m doing to watch.

Head Ned: I’ve seen photos of you guys in Stonecutters robes. How did you come across those?

Dr. Lover: The guys from SunnO))) were having a garage sale. Originally we went shopping at ‘The Vast Waistband’ but all they had were ponchos, muu-muus, capes, jumpsuits, uni-sheets, muslin body rolls… but we didn’t want to look like weirdos… so we got robes.

Do interviewers sometimes try to slip in questions directly from The Simpsons?

Dr. John: All the time. If I had a dollar for every-time an interviewer slipped the word ‘cromulent’ into a question – I’d have one dollar.

Could Jesus microwave a burrito so hot that He Himself could not eat it?

Dr. Lover: That’s more or a question for the Flandererseses. He’s keen on Jesus. We tend to ponder more on what flavour donut our half inflated dark lord would turn our heads into. But if you really need an answer… I’d say short answer “YES” with an “IF”, long answer “NO” with a “BUT”

How often do people ask you where you came up with the idea for the band?

Dr. John: Less often than how often we ask ourselves “why”.

Dr. John: Pretty much all Dr. Colossus songs I’ve written have started with a vocal line. An episode will spark a line that’s universal or can be interpreted in different ways. I’ll sing a melody over and over until it’s embedded in my brain, then I’ll pick up a guitar and add chords. Riffs actually come last for those songs. Dr. Love, Dr. Leg and even Dr. Heels are all generally riff first guys. The combo works well. Dr. Love is an encyclopedia of episodes too, so is a constant advocate for more referential lyrics.

If we call the currency ‘dollarydoos’ at our merch booth, will people get mad?

Dr. Love: People would be a lot madder if you didn’t… stupid Flanders.

Dr. John: Our drummer Josh (Dr. Heels) is the most left handed and is coincidentally also actually left handed.

Any tips or advice for touring in Australia?

Dr. Love: There’s a butt load of poisonous snakes and spiders over here so I like to quote the great Moe Syzlak by saying, “Everybody tuck your pants into your socks!”

Dr. John: Treehouse III. When I was in grade 1 at school – for in what should have been a creative writing exercise I verbatim wrote Clown Without Pity out and formatted it in script form. Little did I realise at the time: That’s not creative writing – it’s dictation (that’s bad)… and B: By osmosis I was analyzing the writing of some of the best script writers in the world, absorbing pop-culture references that I would not understand for another decade…and by learning how to write and understand character voicing and joke timing. (That’s good). You think that’s bad… I only saw Gremlins for the first time two years ago and understood the haunted shop owner references some 20 years later.