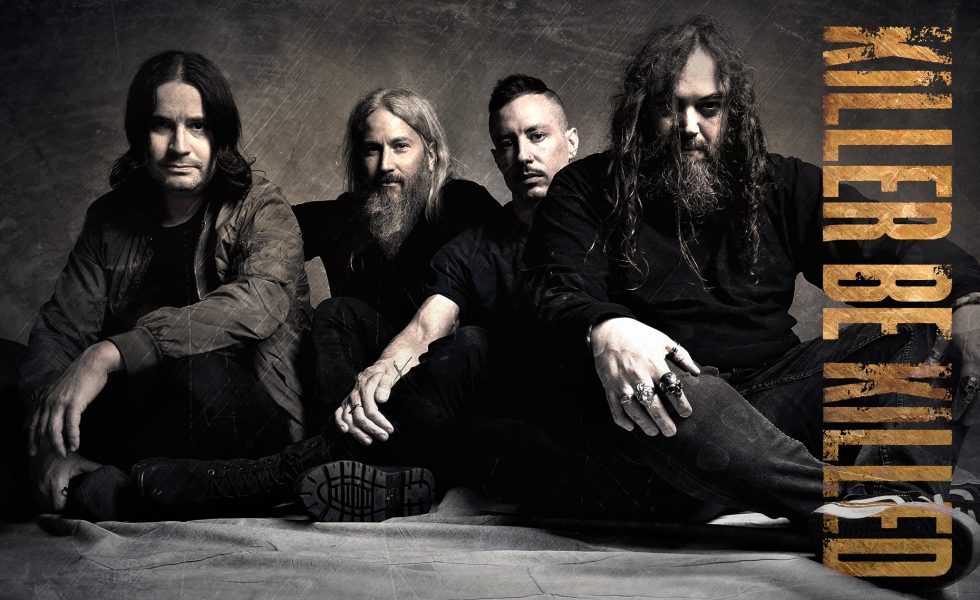 KILLER BE KILLED // Together As One

When Killer Be Killed first stuck their head above the ramparts in 2014, it was hard to ignore the hype surrounding them.

The expectation put on the band due to the pedigree of Max Cavalera, Greg Puciato, Troy Sanders and, at the time, Dave Elitch, would have almost been enough to sink them had their album not been so strong. Bands like this aren’t supposed to work, and if they do, they certainly aren’t meant to last very long.

Even then, Cavalera was of the belief that Killer Be Killed would be more than a one shot deal. It wasn’t necessarily a view shared by his co-founding partner Puciato, but Max was certain.

“I never doubted that we’d make a second record,” he says. “It was just a matter of when, because of all the schedules.”

“We kind of kept it secret for a long time that we were making this record,” Cavalera continues. “Nobody knew we were doing another record. We even made a joke that the first rule of Killer Be Killed is you don’t talk about Killer Be Killed!”

Confirming what Puciato and Sanders have suggested in other interviews, the project coalesced as a band in the wake of their Australian tour in 2015. Cavalera points out that for him, there was another important factor in the group’s development – Puciato became a better guitarist.

“A couple of things happened after the festival. We got an amazing drummer in Ben (Koller), so we didn’t need to look anywhere else. It’s not going to get any better than this. We are all huge Converge fans, and he’s also the greatest guy in the world. Also, Greg got really good at guitar, especially on solos, and so we gave him a shot. On the first record we had guests doing guitar solos, but Greg got really good, man, so I found another partner, like I did with Andreas (Kisser in Sepultura) and Marc Rizzo (in Soulfly). I had found that now with Greg. It had become a group, the same four guys, and I hope it stays like that for a long time.”

Reluctant Hero reaffirms the strong chemistry that was apparent within Killer Be Killed on their debut, and builds on it further. Cavalera makes the same assertions as the rest of the band regarding their creative dynamic: no egos, and no working remotely. The secret of their success, he confirms, is being together in the same place.

“We jammed a lot and there was none of this bullshit that people do these days with file-sharing through the internet or technology bullshit,” he says. “None of that! Old school – gotta be in the room with the guys, jamming, head banging, feeling it. I’m glad we did it that way, because we could have done it the other way but I think it would have taken away the personality of the album. We tried the hardest to make sure it was done the old school way.”

It was born as a project, but always with the ambition of becoming a band. The more other members became involved, like Troy and then Ben, and how we prepared for this record, was not really much different than my work with established bands like Sepultura and Soulfly.
[ Max Cavalera ]

The group also encouraged each other’s strengths rather than relying solely on one or two individuals to carry most of the load, or to take the lead. It was very much a collaborative effort between the three principal songwriters and vocalists to work with each other on the development of ideas and which role each of them would take on a track. One of the most noticeable differences between Killer Be Killed and Reluctant Hero is the lesser presence of Cavalera’s vocals on the new album.

“I don’t sing so much this time, and I’m fine with that. I’m not front and centre all the time, and that’s great. I get to be on the side position and just get to enjoy the music.”

“It was just a natural thing,” he continues. “I wrote a lot of the riffs, so I was already super busy and I didn’t think I needed to be singing all the time too. I wrote a cool riff, I don’t need to sing on it. Someone else can sing on it, and those guys are so good at grabbing the choruses and making them bad ass. Once you hear Greg sing on a chorus …” He trails off for a moment, genuinely lost for words. “Once he is singing, there’s no point saying, ‘Let me do that!’ I don’t even go there! It’s perfect and it’s awesome, and because of that I think it just creates this real band thing – everyone together with the goal to make the best record you can make. No egos, just motivation.”

All with successful careers of their own outside this band, none of them have any need to prove anything to any of the others. Their motivation is to just work together to make great music.

“There’s a friendly competition between us, but it’s not an ego thing like, ‘Look how badass I can make this’. More like, ‘Check this out’. In a pure way, you’re excited to show the guys you’re making the record with the idea. That drives the whole machine and it’s what makes this band go around. Everyone trying to surpass each other in a friendly way, and bringing the best you can bring.”

Four disparate talents, one cohesive unit. Killer Be Killed is proof that such a thing can work, and work exceedingly well. It’s an opportunity for each of them to go outside of their usual creative framework and come up with something they would perhaps never make. Importantly, they all enjoy a healthy respect and admiration for each other.

“We all admire each other’s musicianship and enjoy each other’s company, and I think that’s rare,” Max says. “You might admire a guy, but he’s a pain in the ass to be around!” He laughs. “But that’s not the case (with us). We’re all friends.”

Originally a recording project for Cavalera and Puciato, Killer Be Killed is now very much a band. The rest of them might not have given that much thought in the beginning, but it’s very possible Max Cavalera had that in mind from the start.

“It was born as a project, but always with the ambition of becoming a band. The more other members became involved, like Troy and then Ben, and how we prepared for this record, was not really much different than my work with established bands like Sepultura and Soulfly. In that way, Killer be Killed is really another group.”