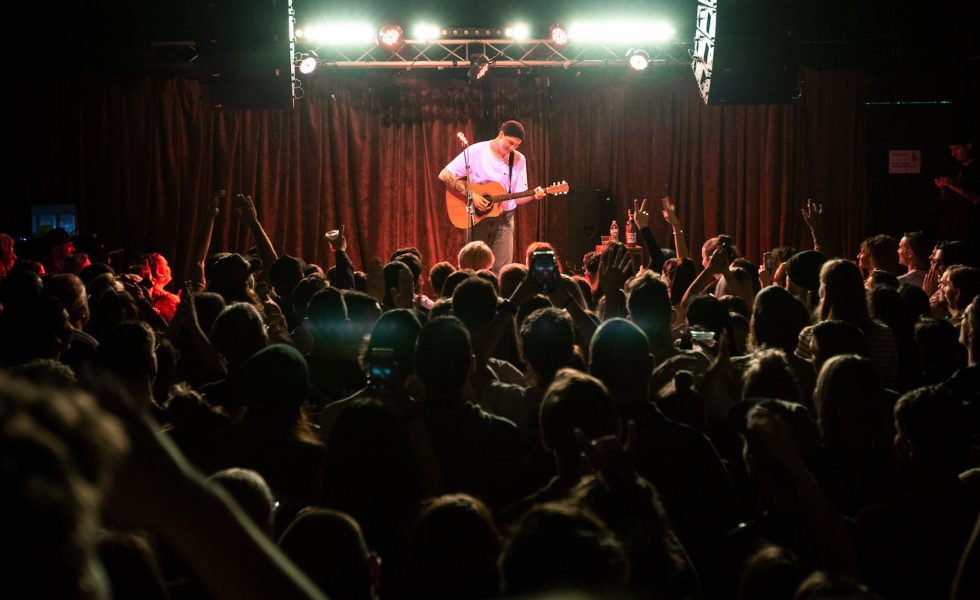 JOHN FLOREANI // Cheers & Cries All Round

Instead of running afoul of spooky shenanigans on Friday The 13th, we’re posted up inside The Brightside, ready to be entertained by some troubadours of the Triple J variety. What’s on this evening’s agenda then, you might ask? Acouey, folks. Cold, hard, off-the-cuff, straight from heart, beer-garden-and-bonfire ready acouey.

When local lad Jack Botts takes to the stage, the venue is mostly empty, with a smattering of couples sitting in the booths, buried up to their vacant eyeballs in the illuminating glow of their smartphones—it being 7:30pm on Friday night and all. Yet Botts takes this in his stride, apparently just super stoked to be here, smiling affably and as he gets ready to hurl some “chunes” our way. He starts off with the warm and free refrain of Beauty Below, an ode to losing your way in the Northern winds. It’s clear that Botts is an ample entertainer, carrying the weight of his performance on the back of simple guitar strumming and the percussive thump of a stomp box. 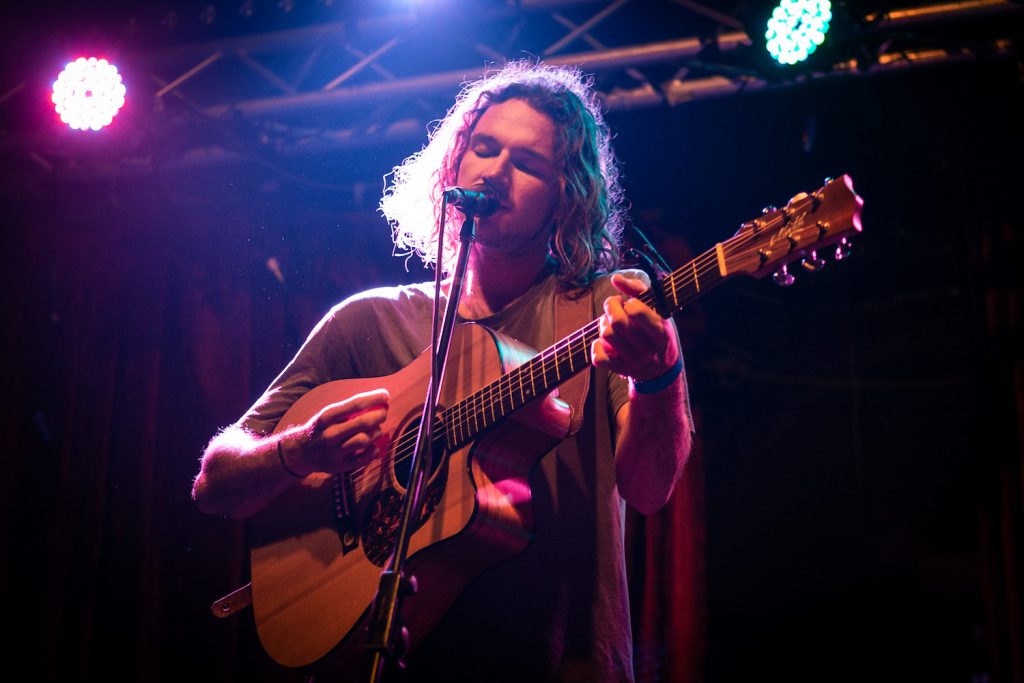 If we’re being honest though, Botts also just seems like a real top bloke. The type of guy that’s ‘Jack’ to us, but definitely ‘Jacko’ to his mates. You know the type: has a few close friends with non-ironic moustaches, a couple of months past Movember. Maybe he spent time backpacking overseas, maybe he did a few months as a brickie, maybe he pulls a few hours as a glassy at the local. And that’s definitely not salt spray in his long flowing hair, no sir, that’s left over residue from this morning’s fresh set of barrels. On tracks like Home To You, Botts plucks his guitar strings with the dexterity of a recreational locksmith. During the upbeat Gypsy, the timbre of his voice ebbs and flows like the tide, caught in a rip of forlorn storytelling: tales of beaches, sunrises and star-gazing; loves lost, loves won and loves yet unsung. It’s a wholesome set that gradually wins over the small yet cheerful crowd here tonight, as Botts thanks John earnestly for letting him tag along.

In the space between acts, the crowd begins to noticeably swell and the aesthetic choices for this evening coalesce into what we’re calling ‘Saved By The Bell Chic’: lots of double denim, heavy doses of acid wash, oversized jumpers, bright knee-high socks. At a glance, every corner of the venue looks like it has a thrift store Daria, or a Degrassi alum just hiding out in plain sight. One dude even looks like a malnourished Eddie Vedder, a bold yet somewhat odd choice given tonight’s line-up, contrasted with the plethora of Trophy Eyes merch on backs.

Next up is Victorian lass Nancie Schipper, fresh off her own single tour and a performance as part of the Big Sound showcase earlier this month. We’re initially disappointed that she doesn’t have the live band accompaniment in tow, but right off the bat, Take Out The Trash shows that Schipper can belt out numbers all on her own. There’s something sweet and thoughtful about her stage presence that comes through as immediately genuine, relatable and heartfelt, particularly during her cheery stage banter and on tracks like the playful Alibi and Cornerstore. Occasionally Schipper’s high-register works to override the power of her chords, but she pulls it back just in time, adding depth and nuance to her performance. Each track of her set feels like the addition of an extra dimension to her wallflower personality: the trials and tribulations of ex’s, moving from the country to the city, growing up as a strong young woman in the modern world. 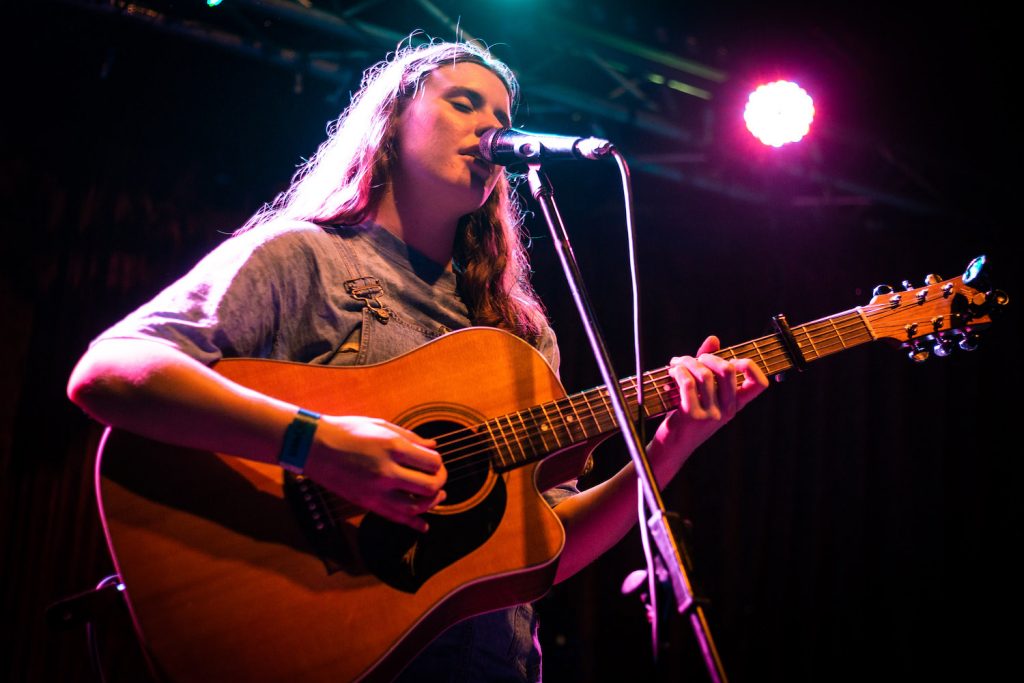 As we wait for tonight’s man-of-the-hour to start, we swing by the bathroom and are treated to a beautiful cross-section of tonight’s demographics. We overhear two blokes talking about how the “crowd is real shit,” and they don’t really know any of his “new stuff,” so they’ll have to “double drop” to get through it. Back in the venue proper, it’s a sold-out crowd now and there’s barely standing room available, let alone decent vantage points, and we watch as the aforementioned piss-trough party-starters try to sandwich their way to the front, double-fisting beers, spilling them wildly on couples and patrons, oblivious to the vicious side-eye and utterances coming from all angles. Absolute gold.

Floreani gives it everything he has: his voice is raw, delivered with passion and gusto, projecting to the bar at the back and roaring through the crowd with each embittered line of verse.

When Trophy Eyes frontman John Floreani climbs on stage, it’s to a rousing cry of cheers, claps and woots. Capped by a black wharfie beanie, Floreani asks that crowd if they’re ready to watch a “grown man cry for forty minutes and try to play guitar.” Despite the laughs that ripple around the room, Floreani knows he has the Brissy crowd in the palm of his hand already, and they’d watch him do nothing but ugly cry if that’s what was on offer this evening. Thankfully, he has songs to play and a guitar to help move things along. Before he has a chance to start, a crowd member screams out “Fuck you’re hot!” and while Floreani chuckles at this, no one actively disagrees with the sentiment either. This is then followed by another patron who chimes in with “Play Wonderwall” (and repeats this during the set ad nauseum), which Floreani describes as the reason why the rest of the country is scared about playing in Brisbane. “Queenslander!” indeed. 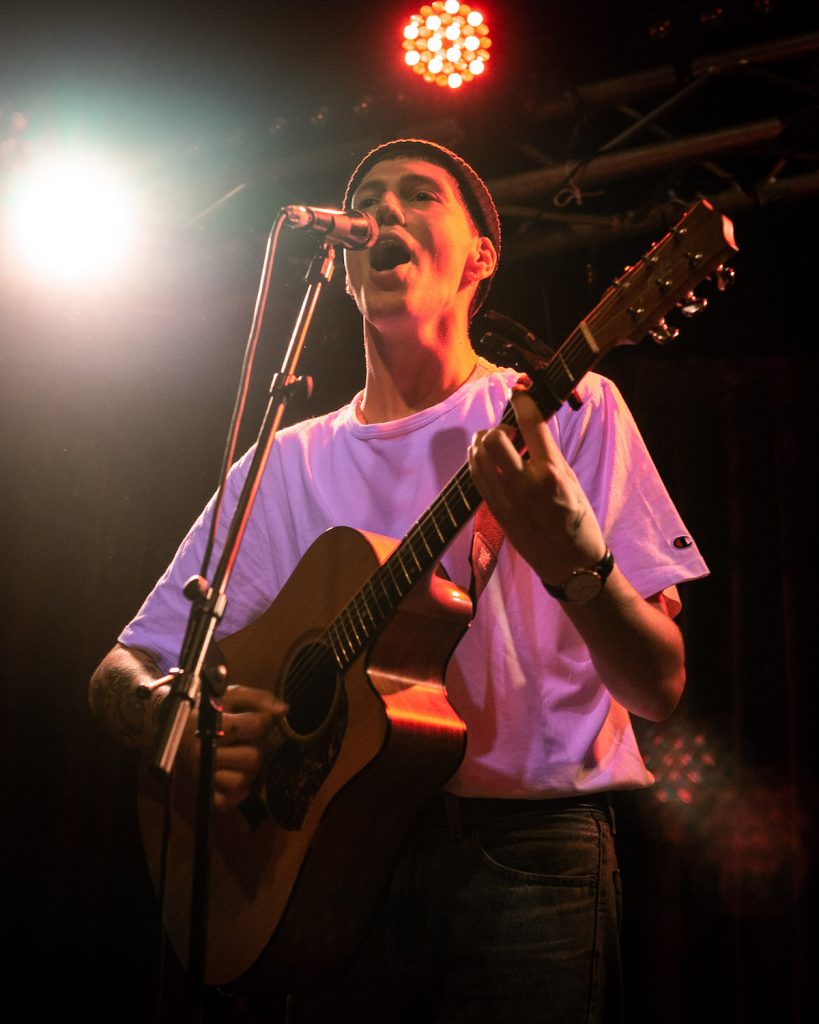 The set kicks off with a stripped-back version of Echoes from Floreani’s debut album Sin, and the sing-along from the crowd is immediate and enormous. Even Floreani seems taken aback, and mid-way through, he stops singing to let the crowd takeover, genuinely overwhelmed by the response. It’s no surprise that Floreani is an old-hat at quality stage banter, having lapped the world several times in his day-job, yet the best part about tonight’s performance are the stories the young frontman tells in the negative space between tracks. Building up to the country-folk inflected Before The Devil Knows I’m Dead, Floreani talks about an ex that was the spiritual ying to his secular yang, adding that he wrote the song about her and how if she eventually did reach heaven with all those “fluffy clouds,” that she’d probably be there alone. Savage. The song itself is rousing and powerful, Floreani’s voice cracking and warbling with vibrato in all the right places, and the crowd gladly jumps in to lead the charge when asked.

With repeated calls from old mate to play Wonderwall, Floreani responds with a gentle jab “Is that the new shoey?”and effectively disarms that line of Oasis-attack like a seasoned heckle-veteran. The standout track arrives in the form of the overtly personal Oh Brother, a tale of brotherly love worn away. It’s dark, it’s real and the crowd eats that shit up. Floreani gives it everything he has: his voice is raw, delivered with passion and gusto, projecting to the bar at the back and roaring through the crowd with each embittered line of verse. The chorus is essentially weaponised feels, catchy and affectual, choking people up and there’s apparently a few ugly criers in the front row. Powerful stuff. Seeing his impact on the crowd firsthand, and how committed they are to helping out, Floreani cheekily declares: “I take all that disgusting shit I said about Brisbane back.” That’s aright mate—you’re welcome back anytime.