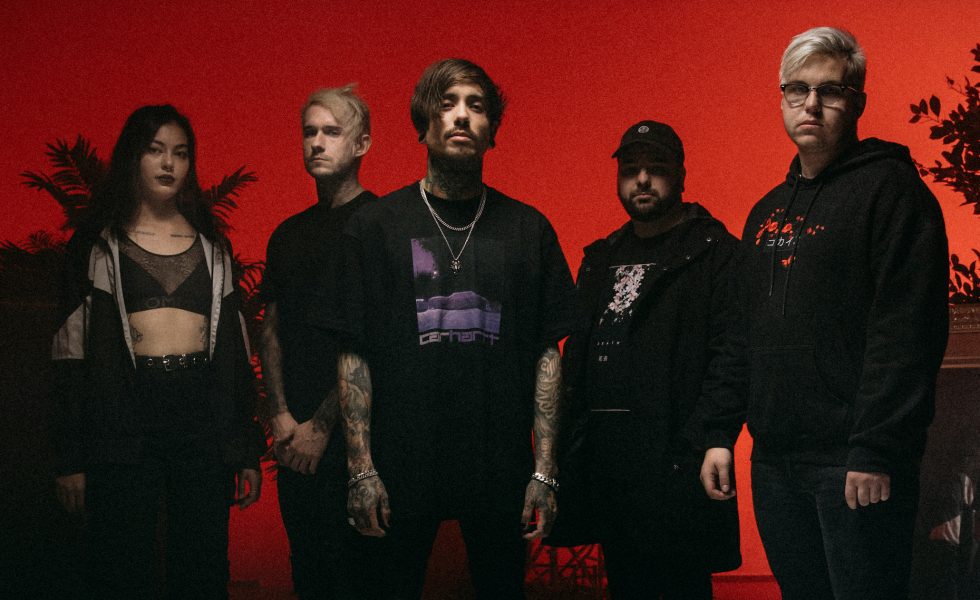 ISOTOPES // Face To Face With Fear

Following on from the release of WYWFM, Sydney’s Isotopes has shared their new single, Die Alone-produced by Stevie Knight and mixed by James Paul Wisner.

It’s an intense listen, inspired by coming face to face with the deepest and darkest parts of your soul. Following its release, we caught up with frontman Justin ‘Millsy’ Miller and bassist Ange Morris to chat all about it.

Millsy: I wrote this song not long after the release of the Fractures EP.  I was sitting on it since the end of 2019, and then we recorded it in June 2020. I always had this idea, and in a sense, it carries on from our track Nightmare, which talks about a time I attempted suicide in 2017. We haven’t released it yet, but we also have another track called Alone which lyrically carries on from Nightmare. Die Alone is the carry on to that track. It was a dark direction to take, but at the same time, I needed to get this off my chest.

Ange: It was cathartic.

Millsy: Yeah. Everyone’s always said Nightmare is heavy. A lot of people have hit me up saying it speaks to them. There was so much more I wanted to say that I didn’t get to. Alone and Die Alone are not necessarily an ending, but I wanted them to provide a sense of clarity to a story that was a part of my life.

If we compare it to your last single, it’s got quite the shift in sound. Tell us about where that change came from.

Millsy: I don’t even know, hey. When we write, we don’t have one direction in mind; we have a mixed bag. Josh (Wood, vocals/guitar), who is one of our songwriters, and I are constantly bouncing back and forth ideas. Whenever there are sections that aren’t necessarily something I can scream over for four minutes, I just think maybe I should do something else. It was a bit-by-bit process for me deciding to rap out a part. We laughed about it. Josh was like, ‘look at you, you’re the next Ronnie Radke or something.’ I didn’t want it to sound shit, so I sat on that rap part for like two months, just going back and forth with it. I just knew I wanted a particular flow.  Eventually, I said fuck it, let’s just do it. I don’t think Ange was even in the band at that time, we were in the studio, and she was doing some videography stuff for us, and she was just like, whaaaat.

Ange: I didn’t expect it (laughs), but it fit in a good way.

Millsy: And with lockdown and all our tours being cancelled, we just decided to have fun and not hold anything back.

I think everyone thought they lost us for a bit because we went in this pop-punk direction and did some softer songs.
[ Justin “Millsy” Miller, Isotopes ]

Both: It’s been too much (laughs).

Ange: Hearing the texts that came through after the short.fast.loud premiere was great.

Millsy: Even having Josh Merriel give us props and say he’s been a fan of the band for a while was great. It felt unreal. I think everyone thought they lost us for a bit because we went in this pop-punk direction and did some softer songs. When we jumped into the studio to record everything, I told the guys I was trying to fuck with everyone’s perception of us (laughs). They were like, we don’t know what you’re talking about, but we trust you. I had already laid out how we were going to release the songs and in which order. I said I can guarantee people are going to ask if I’d given up screaming.

Ange: And that they’d say there were no breakdowns too.

Millsy: Since we released Flower, that’s all we’ve been hearing, people saying they wanted the screams and breakdowns back. There’s only a little bit of those in this track, and everyone was just like, holy fuck, they’re still doing it. There’s hope. (laughs). We wanted to give people something to talk about. That was our game plan from the start. I told the guys we might get heat for it, but it was good if we did because it’d only make people more interested in the stuff we release after. I’d wanted to do the softer stuff for a while but never really had the chance, nor did I feel confident with it. Also, I didn’t want people just to expect releases that were heavy all the way through.

Ange:  We wanted to give some variety. It’s boring listening to the same song over again.

We’d love to hear about how the song’s concept inspired the music video?

Millsy: The first meeting I had for the clip was in October 2020. We were meant to do it with Elder from HAUS PARTY, who did the WYWFM music video. I was meant to tee up him and Colin Jeffs, who ended up doing it and have them work together. Towards the end of the WYWFM video process, lockdown was kicking in, expenses were high, and things were getting cancelled, so it felt like everything was turning to shit. All our plans went on a downward spiral, and we wondered if we’d even be able to do this music video with all the expectations we had of it. It all ended up turning around. Colin ended up giving me a call, and I think we spoke for two hours. We just could not stop talking about ideas. I told him the concept and how I wanted it to show everyone’s fears and get dark, to the point where it’d have people on the edge of their seat and emotional.

Since it dropped, I’ve been getting so many messages from people close to me saying things like: “Dude, as soon as that noose was over your head, I broke down. Are you okay?” You have to get vulnerable to a point where people realise this is something you went through.

Angie: But to the point where it’s authentic and not a show.

Millsy:  It is really nice to know that I still have so many people close to me who care. This song is from a year ago, so I was trying to put myself back in the mindset of that time.  I’m just trying to get it out and close a chapter.

Angie: Colin was really good to work with too. Everything just gelled. All the ideas bounced off each other easily. When he was directing us through the shots too, he told us everything step by step, so we could mentally prepare because we knew what was going to come. It was really refreshing and nicely planned.

Millsy: As heavy as it was, we all meshed so well. It was the most challenging film clip we’ve done, but the most fun at the same time. When we all finished, we just wanted to hang out and grab some beers. Brad was the only one of us quite shaken afterwards. He’s terrified of drowning, so when he felt someone trying to drown him in a sink forcefully, it was enough to take him to another level and turn him pale.  He needed five minutes for himself after the shot.

Angie:  He went the full nine yards for his shot. It was really brave.

Can we expect to see a new album or EP soon?

Millsy: It’s been hard because of lockdown, but there has been a lot that we’re working on. We’re going to drop an EP; I don’t think we’re at the stage where we’d drop a full length. The EP itself is a concept piece on everything involved in my life to a certain point. We all feel like it just needed to tie a knot on that chapter, so then we can go down another avenue.

We were meant to shoot another music video for another song, but that’s been postponed three times now. We’re not sure when it will eventually come out. It’s shit because we recorded these songs in June of last year, finalised them last year, and we were even back in the studio in March of this year to start our next phase. We already have songs for that ready, and we haven’t even been able to get this EP out. We don’t want to release something at a point in time where there’s no point in doing it. But I do think releasing Die Alone has brought everyone’s motivation levels back up. It feels like the drive we all needed.

Ange:  It was really important for us to drop this. Like we were saying, it feels like there hasn’t even been a point to practice. But seeing the response to this song and music video has really inspired us to get back to it.

Millsy: We don’t know! It was really funny; when we were on tour in Japan, we ended up at this hotel that had two rooms with three beds in them. We walked into the first room, and the first thing we noticed was the doona on one of the beds had llamas on it. I was like, bro, this is your room! Brad got so angry, but then we went out that night and got drunk. When we returned, it was pitch black, and I made him sleep in that bed, but he didn’t know. When he woke up in the morning, I was like, look at where you are, and he lost his shit. We just want to put it on record that he hates both of those things.