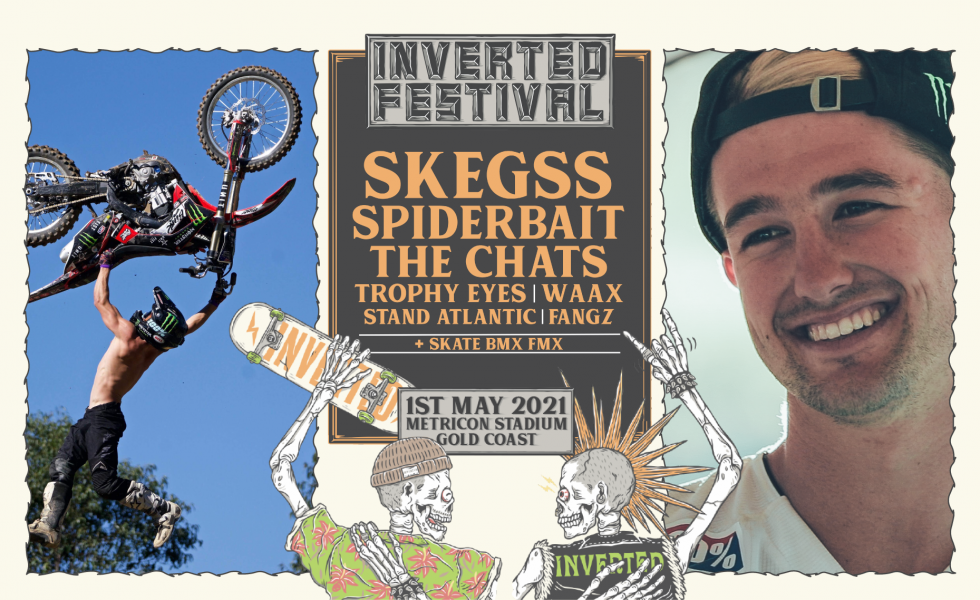 Harry Bink has a lot of credits next to his name. Not only was the Nitro Circus star the first freestyle motocross (FMX) rider to land the front flip rock solid as well as an X Games finalist—he is also quite possibly the most charismatic and friendly people to interview ever.

Spending most of his year at his 50/60 compound making practise jumps, Bink couldn’t be more excited now that Queensland is opening back up to festivals.

“It’s been a long year and I’m super excited for events to be coming back.”

Being a part of the inaugural Inverted Festival—a one day event featuring some of the world’s best Skaters, BMX riders and FMX riders as well as a stacked lineup with Skegss, Trophy Eyes, Spiderbait and many more.

“I’ve never even been to a festival on the Gold Coast, let alone being able to ride my Dirt Bike and still get on the cans with the boys. I’m just stoked it’s going to be insane.”

With some of Australia’s best punk rock bands performing and some of the best FMX riders on show, Harry touched on the atmosphere and camaraderie that he can’t wait for at Inverted.

“When you go to the X Games it’s usually all Aussies in top 5. Australia has some of the best FMX riders in the world, all who are gold medalists and we normally compete against each other. But we are all really good friends, so I’m really keen to be able to hang out and ride with them.”

“Plus I know between Jacko Strong and Rob Adelberg they live for heavy metal music, all of their riding soundtracks are just like MX VS ATV’s soundtracks. So with all the boys together for the first time in almost 2 years it’ll be awesome.”

And luckily for Strong and Adelberg, the lineup will have a nice dose of punk rock for them. Furthering his thoughts on music, Bink discussed the close link between heavy music and motocross.

“I honestly love all types of music but heavy metal and Dirt Bikes is just such a gnarly combination.”

“It’s just the biggest party vibe and that’s how groups like the Crusty Demons evolved—it’s how our sport evolved. Listening to heavy music and riding Dirt Bikes is kind of one of the most badass things you can do. It depends on the individual but I think it’s the perfect combination.”

With Inverted being Harry’s first event in a year he “will be holding [his] breath until this event kicks off”. Kickstarting the event calendar Bink will continue on the road with Nitro Circus in 2021, a dream come true that he doesn’t take for granted.

“For us as well who are on Nitro Circus it’s crazy because everyone wants to be on Nitro Circus, so everyone is always posting all these gnarly videos online which makes us work so much harder because we are scared someone else will come up and take our job.”

“We are all always intimidated and scared. If you’re not scared you are pretty much going to get hurt because as soon as you stop getting scared you get cocky and slip up and make dumb mistakes. But it’s always very challenging, even when you do a trick that you think you know how to do you are never super confident. All it takes is one mistake when you are tackling 75 ft ramps and going ten metres into the air into a hard and normally metal landing.”

“You have to treat it very seriously any time you put on a helmet.”