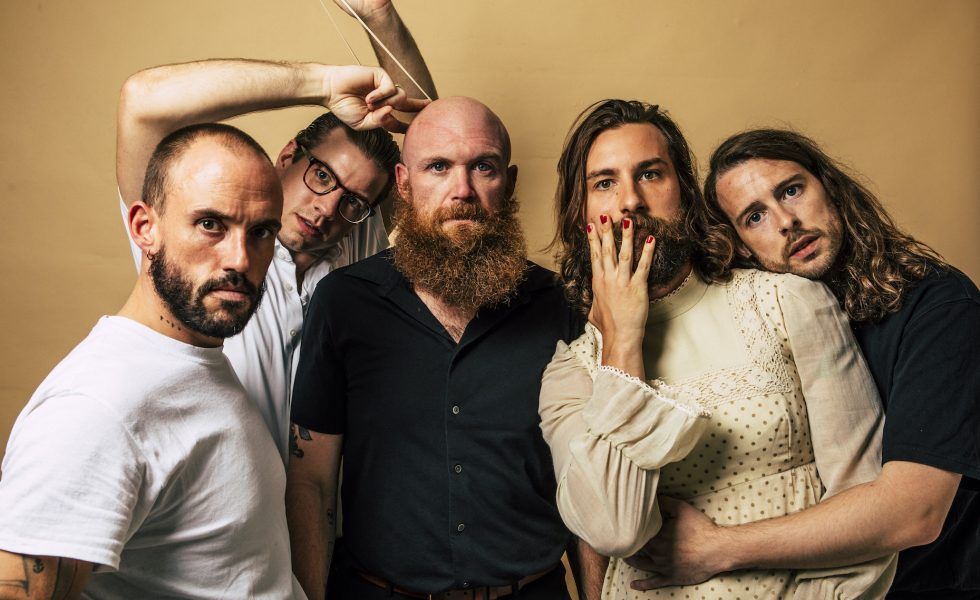 Few projects have been as ambitious as Metallica’s recent The Blacklist project, the 30th anniversary celebration of their supernova 1991 classic self-titled (also known as The Black Album), featuring dozens of cover versions of each song on the entire record.

From Biffy Clyro, to Miley Cyrus, Corey Taylor to Phoebe Bridges, The Hu to St Vincent and even Yo-Yo Ma, it was a 7LP mega-collection of over 50 diverse artists providing their own take on the metal legends’ polarising collection of classics.

One such artist involved were bristol post-punk sensations IDLES, who provided an industrially tinged, angsty injection of rage into the stomping number God That Failed—a deep cut by all accounts, but also perfectly representative of the new era that Metallica themselves were moving into at the time.

“Metallica’s management got in touch with us, they picked that song for us … listening back to the Black Album I think they’re right—it has that heavy post punk element already in there, so we just really lent into that a bit more,” recalls guitarist Mark Bowen, ever the casual British gentleman and a stark juxtaposition to the chaos of his bands sonic and live reputation.

The Black Album came after Metallica’s legendary run of Kill Em’ All, Ride The Lightning, Master of Puppets and … And Justice For All—the gospels of thrash metal, a genre that the band promptly abandoned in search of new waters on their 5th self-titled effort. It was a huge risk, given where the band were in their career at the time – and the result was critical superstardom.

CRAWLER is us starting again—we went into it with a sense of awareness, because we’re going to be on tour for two years, and we want to be able to use that time brilliantly and challenge ourselves to go down new avenues.

While IDLES are a far-cry from where Metallica were at the turn of the 80’s, the release of their new LP CRAWLER finds them in a similar space of sonic deconstruction, despite a remarkable run of success as a result of their tried and tested formula of old.

Their first three records were masterworks of reckless post-punk, fusing the dread and tongue-in-cheek attitudes of Joy Division and The Smiths with the chaos of Sex Pistols and Nirvana, with some Nine Inch Nails scattered over the top for good measure.

The result was a cult following erupting the world over, and most recently a UK no.1 with 2019’s Ultra Mono.

Ultra Mono was the IDLES’ trademark sound perfected—which makes it all the more remarkable that on the hotly anticipated follow-up CRAWLER, the band leave said sound at the door.

“It has to be representative of where we’re at creatively—but that’s evolved, rather than shifted—there can’t be this huge paradigm shift, because there’s a team involved here so there has to be something tangible for people to want to move forward musically,” says Bowen.

“We wrote that album (Ultra Mono) as an end chapter to where we were at—it was a caricature of what we had built so we could start again,” adds frontman Joe Talbot, also on the call.

“CRAWLER is us starting again—we went into it with a sense of awareness, because we’re going to be on tour for two years, and we want to be able to use that time brilliantly and challenge ourselves to go down new avenues.”

When you do 190 shows each year, you get into this box of what your identity is—now we have the breathing space to start again—this record is the product of the new, which is space, calm, reflection and a sense of gratitude that we have security in our jobs.
[ Joe Talbot ]

Of course, CRAWLER still sounds distinctly IDLES—there’s the raging heaviness that you can both mosh and dance to in spades across the record—but there’s also a sense of introspection, inspired in part by Talbot’s own near-death experience in a car crash.

“We wanted to explore things we touched on with those old albums but never quite had the time to reflect on and have a deep conversation about,” says Talbot.

“When you do 190 shows each year, you get into this box of what your identity is—now we have the breathing space to start again—this record is the product of the new, which is space, calm, reflection and a sense of gratitude that we have security in our jobs.”

“In a weird way we benefited from the pandemic lasting longer, because we needed to have some time to reflect, have some soul searching and figure out why we were writing songs, what our intentions were with the music,” adds Bowen.

“I sat on some of these songs for a really long time because I believed in them and really wanted them to work, but I needed the presentation to be just right so that the band would be on board—it wasn’t going to be Never Fight A Man With A Perm this time around.”

While the stylistic shift will no doubt cause concern for some IDLES faithful, one listen to CRAWLER reminds the listener that at the end of the day, this Bristol 5 piece are some of the most talented songsmiths around today. They’re just presenting their yarns and reflections on a slightly different palette this time around.

“It’s just opened up new avenues for us to make more music … it’s really freeing to write something that you’ve challenged yourself and each other on—and to come out happy—that’s awesome. We’re starting a new chapter, and that’s great,” says Talbot.

“The more creative and poetic you become, the more honest you become—when you write your feelings down expressively … it allows you to become more cathartic.

“You’re not on the paper—you are you.”

CRAWLER is out November 12, via Partisan Records.