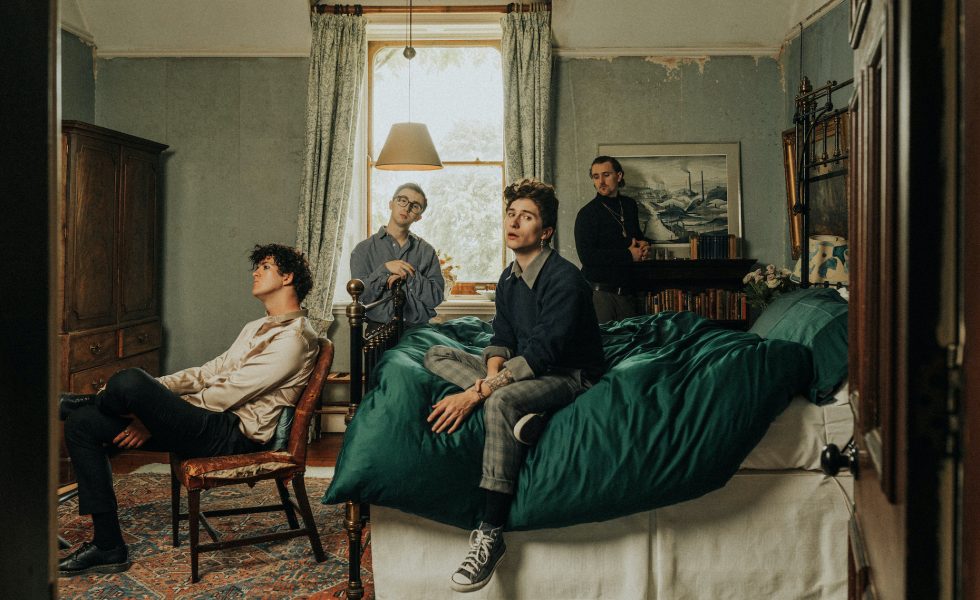 No two words induce more fear in a musician than sophomore slump. The prospect of surpassing a debut record is daunting and has seen many crumble. Holding Absence did not.

Rising to the challenge, the band dropped The Greatest Mistake Of My Life– a richly textured record full of tales of love, loss and life. With so much to dig into, we got frontman Lucas Woodland on the line for a chat.

Let’s talk about the concept of the album. We’ve heard it was inspired by life, love, emotions and everything in between but was there an overarching story you were trying to tell?

Lucas: In all honesty, I didn’t approach it as a concept record. With our debut, I told myself to try and aim for that. For this record, I just did what felt natural. Looking back, it is just existential. It was me coming to grips with being a 20-something-year-old, trying to find my way in life and making peace with the way the world is. There’s hope, fear, love and sadness on this record. It’s just the mixed bag of emotions you feel in day to day life.

We’ve heard your Great Uncle inspired the record title. That must’ve been so special to you.

For sure, my family loves music. My nan plays the piano, and my parents would go to Nirvana and The Pixies shows. The title of this record fell in my lap through my nan. It felt so right. Even though I wasn’t aiming for it to be a family thing, it did feel extra special because of it. The girl singing on Die Alone is my sister too. That’s another family tie within the album.

How’d the record come together?

Our debut felt stitched together. We spent a week on drums and everything, and then we went back and forth to the producer’s garage. It was less of a complete experience. On a personal level, I thought this record was life-changing. As a musician, it’s always been a dream to have five weeks in the studio. Having my sister involved was such a new experience. It was this weird juxtaposition of trusting her to do well and hoping she’d smashed it for both her and the band’s sake. The whole experience was perfect, and working with Dan Weller was brilliant. He’s inspiring and a good friend now.

It feels like there was a lot of growth in the band between records. Would you say this was the case?

Completely. For me, that change came through in the sense of unshackling. With the first album, we had a lot of expectations and pressure. I won’t blame that on anyone but ourselves. We are very intense and, as our music suggests, we are very emotional and passionate. Knowing that everything could go wrong if we screwed up our debut put that pressure on us. Our debut did well, but not incredible or terrible. Because of that, we felt like we were on a level playing field. We felt like we could write music, but we didn’t have to live up to anything. We just wanted to do the best we could this time. That was the key that unlocked our growth and this album.

Do you feel like the Holding Absence of then could’ve put this record together?

It’s funny. Because of our aesthetic change and going from black and white to colour, I view us as two different bands. I always believed in myself and everyone I was in the band with, but I don’t think those kids were ready for what we’ve done now. As adult men writing music now, we’re doing stuff that we only could’ve dreamt of back then. The debut album and this one aren’t a million miles away in the message of delivery. There is a tangible thread between the two. I just feel we did everything better this time around.

You’ve called this record the “truest representation” of Holding Absence. So, in your eyes, what does the band stand for?

With bands, you might define them by the genre or something like that. There are lots of different angles you can take. Ultimately, their message or purpose is what people believe in.  That’s the one thing that hasn’t changed about the band. From day one, we told ourselves we were a band that cared about the music, the people, and the people that cared about our music. I believe in myself and this band in the same way I always have, but I feel like now is the time to show people that there’s gravity to that. For the first time, I feel like we’re living up to the hype in our heads.

Generally, nine times out of ten, I don’t believe in myself. Now, I feel like I’m watching myself become a different person, and I believe in them. That’s a profound thing to go through, especially with music.

What are you hoping listeners get out of the record?

Connection and depth. I’m a real music loving musician, and I just hope this album can help anyone feel the way My Chemical Romance, The Pixies, Thrice and all these other brilliant artists have. Those artists have changed my life within hours of music and got me lost for weeks at a time in the universe they’ve made. I hope this album can be a shelter for someone when the world is too much, or that it will help someone come to peace with themself.

I’ve seen what this band can do for people, myself included. The messages I’ve read and the people I’ve met gives me the belief that this band can help people and inspire them. I’d love to tour the world. I’ve never left Europe, so coming over to Australia would be a dream. There’s so much I want to see but being able to meet people and influence them with our music is the ultimate goal. I hope this album gets to touch people all around the world.

Purchase and stream The Greatest Mistake Of My Life here.