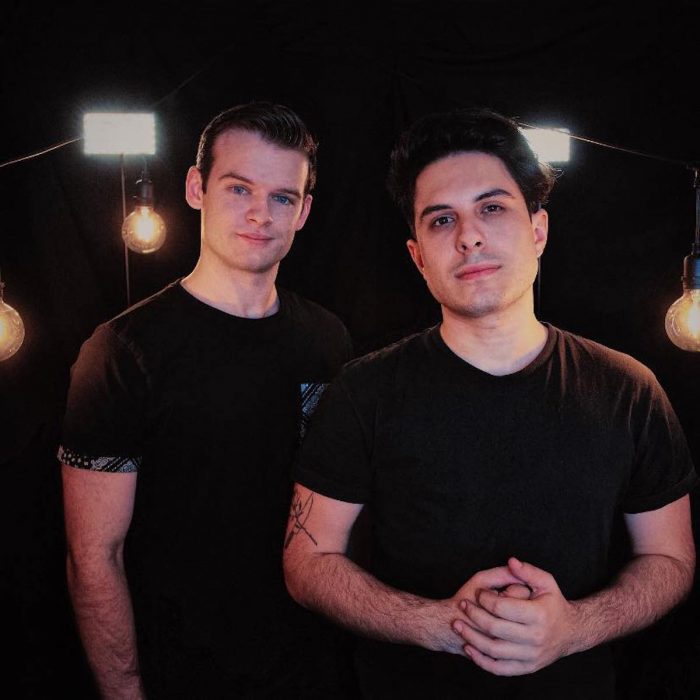 Oz duo Gunning For Allie are gearing up to release Stay, a track three years in the making.

It’s a personal one for frontman Joshua Mulheran, who drew inspiration from a past relationship and the journey he went on following its breakup. Before its release, we got Mulheran to run us through the track, their plans for an upcoming EP and more.

Joshua: Gunning for Allie started as a side project for me back in 2017. I’m a theatre actor professionally, and I was doing Book of Mormon in Melbourne. I’ve written music since high school. I love it, as well as the theatre with its singing and dancing. I had some time up my sleeve, and I wanted to put some music together.

A mate of mine from high school that I’ve played in bands with, James Waters – we decided to write a song together called Braille. It was dedicated to a friend of mine who had brain cancer. That kicked off the Everyday Warrior EP that we dropped in 2018. People resonated with Braille, and we enjoyed the writing process, so we decided to make this an official band. This time around, we actually lived together when working on our upcoming six-track EP. Stay is the first single from that.

You’ve spoken about the new single, Stay, being three years in the making. Tell us about that journey?

It’s such a crazy thought that three years have gone by. COVID obviously took up two years, and everyone’s felt the impact of that. I started writing it back in 2018 whilst doing Jersey Boys. I was going through a breakup at the start of 2019. James and I started writing the song while the girl and I were still together, but as the relationship started to break down, I was like, well, I know what the song is about now. So we were writing the song when she and I were trying to work it out and figure out if we’d get back together. Lyrically, it was we’re on a break now, but we’re going to get back together in the future sometime. It was almost a love song.

As the relationship took a turn, she actually met someone else. The song then progressed to tell the story of our relationship. I guess that’s why it’s such a boppy track, but the lyrics are on the way down a little bit. They’re not depressive but reflective of the relationship. So we recorded that track at the start of 2019, and then we decided to put it on hold until we recorded the rest of the EP. Originally, the song was this sun-soaked, indie kind of track, but then we took it to the producer and started recording. It morphed into this 1975 style, synth-driven pop track, which we really liked. It was definitely a departure from our original sound, which was more throwback pop-punk.

We wanted to do a music video, but then the world went on lockdown. There were constant delays; we wanted to go down to Sydney to make it, and it kept getting pushed back. Now, almost three years later, we’re ready to share it with the world. It’s been a long time coming.

Originally, the song was this sun-soaked, indie kind of track, but then we took it to the producer and started recording. It morphed into this 1975 style, synth-driven pop track, which we really liked.
[ Joshua Mulheran ]

Music really is the best way to express yourself, hey?

Yeah, music is a cathartic outlet. All of our songs have been written about an experience or a person. Like I said earlier, our first song Braille was written about a friend who’s unfortunately since passed away from brain cancer. It was a way for me to deal with the challenges she was going through and then her eventual passing. There’s a couple of other tracks we’ve written about the loss of a loved one, and Stay is a breakup song. A few other songs on the EP deal with the relationship, how it ended, and how I grew and moved on as a person. The great thing about music is that it’s storytelling. If I write a personal song, I try to do it in a way that lets fans or listeners apply it to their lives. Music is really one of the great communicators. People can follow your journey as well as their own.

It was really cool, and a quick weekend! James and I are both from Brisbane originally. We have some friends and colleagues that run a production company down in Sydney, so we really wanted to go down and work with them. All the organising was back and forth over Skype and messenger, as we’ve all become accustomed to.

So we went down to Sydney Props Photo Studios for a day and had a team of 12 people come in to film, record and help out with the props we had. The actors Izaak and Elke were awesome to work with. It was action-packed, especially for someone who does theatre, where we usually do four weeks of rehearsals and then eight shows a week. But with this, we had to smash out everything we needed because once we left the room, we couldn’t go back. We couldn’t put things in that we didn’t film. We had to capture the vision. If we couldn’t film what we wanted to, we had to decide what we would do on the spot and how we’d still tell the story.

It’s amazing that you’re also a theatre actor! How do you balance that and the band?

It’s like you’re a parent who has two children, and you can’t pick which one is your favourite. Theatre is you going in to fulfil someone else’s vision. In the band, it’s my creative freedom, and I have the opportunity to explore what I want. I think the two passions balance themselves out though. If I’m feeling a bit burnt out one day, I can turn to the other, and it’ll rein-spire me. They complement each other and keep me moving forward.

Can you share any details of the upcoming EP?

It’s called Sleeping Alone. It was an interesting time for us. James and I lived together for about a year, and we wrote these six songs. There’d be funny times when he’d come out of the shower and have a drumbeat in mind, or I’d be ready to go out, but we’d just focus on recording this idea and fleshing it out. James and I hadn’t spent that much time together since high school, so it was a cool, bonding experience. Usually, we’d write songs across different states. Like Stay, we’ve had the EP recorded since 2020, and we’ve just been waiting for the right time to put it out. We drew inspiration from Chvrches, The 1975, and the 80s with reverb drums, cool guitar riffs, and synthetic alter boy harmonies in the background. We’re super keen to get the EP out in the world. We’re looking to put out the second single, Talk, in February or March and potentially the EP in April.