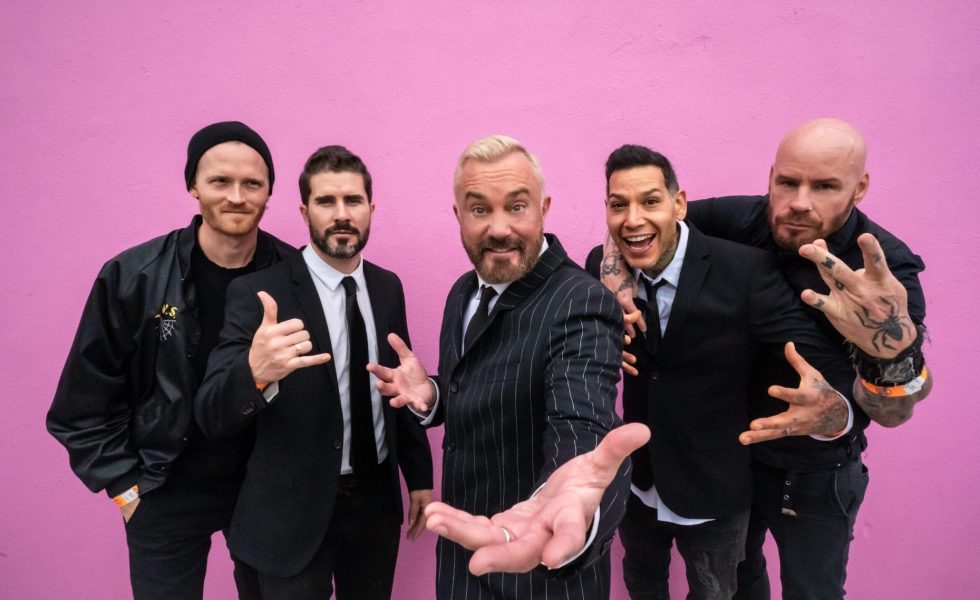 It’s December 2020, and it’s clear that the festive season is going to look pretty different this year–so why not reminisce on better days? “I wish everyone could see a Feldy family Christmas,” the Goldfinger frontman sighs.

“Under normal circumstances, there’d be like 500 people over at ours. We’ve got a snow machine, we’ve got a big ramp covered in the snow for people to go sledding on. I’m probably 18 espressos deep and riding down the ramp naked. Goldfinger would be playing; Travis Barker on drums. Last year, Tyler Posey and Arrested Youth played a few songs, too. We’d have a big donut van, and a vegan taco truck …” Feldmann stops, sighs, and tragically concludes: “That brings us to this Christmas–where I will be stuck inside my goddamn house yet another day.”

It would be easy to dismiss this as the fanciful first-world problems of a 53-year-old millionaire, but it’s more emblematic of how much the man lovingly known as Feldy cares about giving back to those that matter the most in his life. In 2020, that for him has meant keeping spirits up via Goldfinger–the band he’s fronted for over 25 years now, and the one he still returns to despite an increasingly-busy schedule as a songwriter and producer.

For several months throughout 2020, the band shared a series called Quarantine Videos. As the title suggests, all five members performed beloved Goldfinger tracks from their homes and pieced them together to create a unique live session. Feldmann was extremely happy with the rollout, hoping that they brought people some happiness during an increasingly-glum period.

An idle mind is the devil’s playground, I don’t know if anyone else is like this, but I can’t be bored.
[ John Feldmann ]

“An idle mind is the devil’s playground,” he says. “I don’t know if anyone else is like this, but I can’t be bored. If I’m bored, then I’m thinking. If I’m thinking, my family is gonna suffer. I’m gonna make my kids do shit they don’t wanna do. I’ve got to be busy, so that’s how Quarantine Videos came about. We didn’t know what was gonna happen at the time, so I bought a GoPro and just locked myself in my studio. I recorded myself playing Here In Your Bedroom, explained it to the other guys and sent it over.”

Ultimately, the first Quarantine Video racked up over a million views on YouTube alone, and soon the videos for signature song Superman and their cover of Nena’s 99 Red Balloons followed suit. Feldmann was incredibly grateful for the reaction the videos got: “It was crazy,” he says with a rare and much-needed laugh. “People were just dying for positive content–where people could really get out of their own heads. There was so much negativity in the news, and we needed some kind of break. Hopefully, we’ve given people that–not only with these videos, but with the record as well.”

The record Feldmann alludes to is Never Look Back, the band’s eighth overall, which dropped earlier this month. It’s another upbeat blend of pop-punk, ska and alt-rock that has come to shape Goldfinger’s sound across the decades–not to mention signalling the return of founding guitarist Charlie Paulson, playing on his first Goldfinger record in 12 years.

“I had these three songs I’d written for other artists,” Feldmann explains of the album’s origins. “When that didn’t work out, I kept them in my back pocket–and, honestly, I’m so glad that it didn’t work out with the others. They really helped lay the groundwork for this record, which I just tore through writing while we were in quarantine.”

Bassist Mike Herrera (also of MXPX) was enlisted as a co-writer by Feldmann, given free reign to write second verses for a sizeable portion of the record. As for Paulson, Feldmann was curious as to how he would factor into Never Look Back–after all, this would mark the first-ever three-guitar Goldfinger record. “He’d been away for a few years, obviously, so I wasn’t sure what level of involvement he was going to have,” says Feldmann.

“Not only did he nail all his guitar parts, but he even asked to sing a verse on his favourite song on the album, Infinite. I was all for the idea–I loved having him back and being a part of this record.”