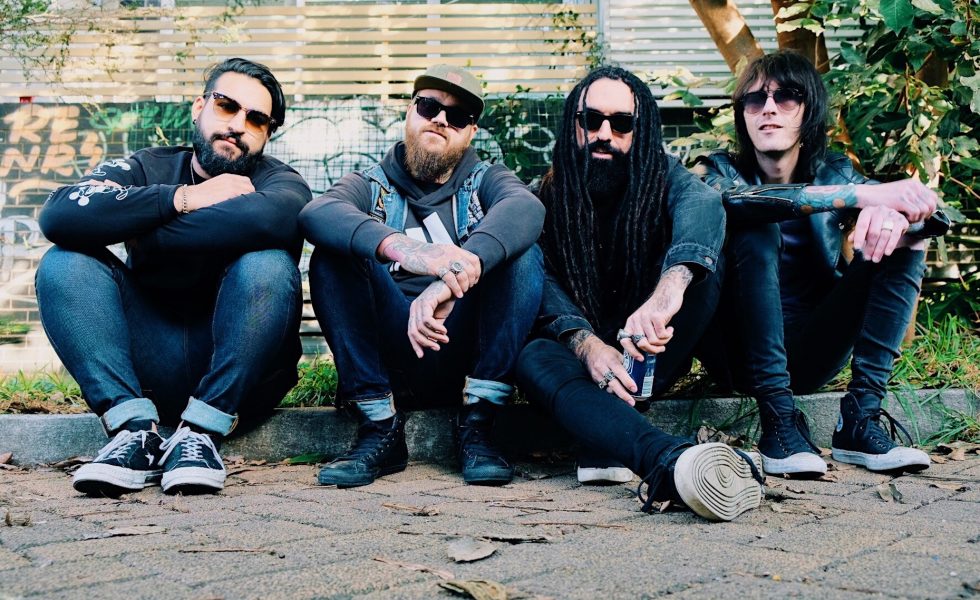 Sydney band Fangz haven’t been a band for all that long, less than a year in fact, but they’ve roared onto the punk-rock scene with gusto and have just dropped their debut EP For Nothing which is receiving all kinds of praise from critics and fans alike.

Starting off in the most obscure fashion, the boys were in an airport in London, after a tour with their previous project went awry, and wondering what to do with themselves on their return to Sydney. This is where fate, in the form of punk-rock legend Liam Cormier (Cancer Bats), stepped in. After hearing their woes he said to the band ‘Why don’t you go home, start a punk rock band, call it Airports and write songs about airports!’. It wasn’t quite that, but some of the guys took his advice.

“He comes over to me and asked ‘Dude, what’s wrong?!’ and so I just decided to tell him everything. And that was when he said that we should go home, start a punk rock band and name it Airports and write about airports,” Majam laughs.

But, while writing about airports had zero appeal to the trio, forming a new band did and from there, FANGZ was born. The boys didn’t waste any time at all, on their return from Europe, getting stuck into writing as soon as they got back to Sydney.

“As soon as we got home from Europe, Sam and I locked ourselves in a house in Marrickville, Sydney and we started listening to all kinds of music and writing everything we could,” Majam says. “Within a month we’d recorded four demos live in the studio with our drummer and from there we decided to try and find a singer,” Majam continues.

You can spend all the time in the world in a rehearsal room but any live show just counts for so much more.
[ Jameel Majam ]

Their search for a singer was short and sweet it seems as Majam explains that he typed in ‘singer’ to Facebook and the results came up with a Sydney-based Canadian, who happened to be looking for a band. “Our (now) singer Josh came up and was looking for a folk-punk band to play in, so I sent him a message and within half an hour he had sent me back a demo,” Majam says. “And as it turned out, he was Canadian and friends with Liam Cormier!” Majam laughs.

Fateful meetings aside, it wasn’t long before the boys decided Josh was perfect to complete their lineup and they headed into the studio in December last year to record the EP with Stevie Knight (The Dead Love) producing the release. The band didn’t slow down after the recording process was done either, and they entered into a residency at The Hideaway Bar on Enmore Road in Sydney, to help them hone the live aspect of their show.

“For us, the residency meant begging the venue if we could please have every Friday night for a month. They said ok and we did everything ourselves. We booked all the bands, the DJs that would fit in with the nights, we did postering and really hyped every show we could. We ended up doing everything, we were the band, the booker, the stage manager on the night, we did it all,” Majam explains.

Their hard work paid off, as they sold out each Friday night, and they were also snapped up by the booking agency, 123 Agency, and Majam highly recommends that bands that are starting out, look into doing something like this as it is a huge learning curve for bands to see how the whole process works.

“I think it is the greatest thing you can do. You can spend all the time in the world in a rehearsal room but any live show just counts for so much more. And it’s a good way to build a community of musicians around you because you are playing with three or four different bands every week,” Majam says.

The FANGZ community is definitely growing and with their debut EP unleashed upon the world, they are heading out on tour in support of the release. If you’re a fan of raw, energetic punk-rock, then definitely check these guys out at a show near you soon.

Catch FANGS at the following dates: