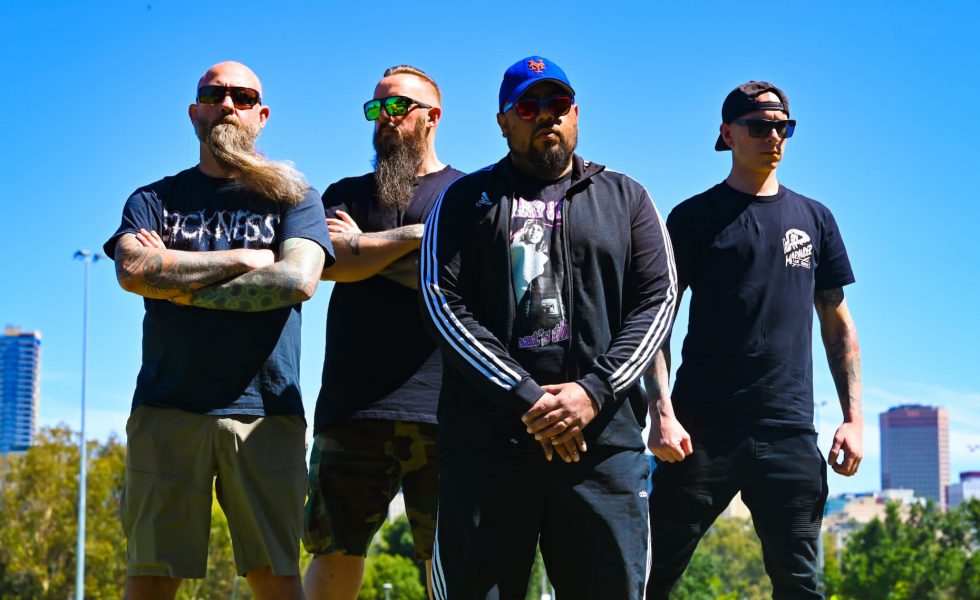 It was a decade ago when Lee Gardiner was last out front of a metal band. For almost ten years, Gardiner was at the forefront of the Adelaide metal scene as the vocalist with Double Dragon, leading them through a string of line-ups and tours with Slayer, Mastodon and Megadeth and working with Truth Corroded’s Jason North with a label and booking shows.

MORE: NORTHLANE: From the lyrics to the avant-garde inclusion of trance and DNB elements, Obsidian truly showcases a new era for Northlane. // OCEAN GROVE: Another Voyage To Oddworld REVIEWS: CANCER BATS: Psychic Jailbreak // OCEAN GROVE: Up In The Air Forever // SAVIOUR: Shine & Fade // RAMMSTEIN: Zeit // ECHOES IN ETERNITY: Into the Negative

In 2012, Double Dragon went their separate ways, with most of them keeping an eye in with bands like Voros and Dyssidia. Everyone except Gardiner.

“I was out of the game for a while, doing some stuff that had nothing to do with metal,” he explains, a day after a trip to Fiji that turned into a COVID quarantine nightmare.

“I had to do the full seven days in quarantine. So I was originally only meant to be there for five or six days, but as soon as I got there, everything went bad! I should have stayed at home.”

Two years ago, Gardiner came across Aidan Cibich, the Adelaide musician behind the all-instrumental Apophis. The singer was blown away with what he was hearing, and Echoes in Eternity was born.

“I just kept seeing his videos pop up in my feed of him just shredding away,” he says. “I just thought, ‘Who is this bloke connected with? That’s some crazy skills and riffs going on here.’ So I just reached out to Aidan, and then in no time … I think we’d recorded a couple of tracks before we’d even met, just to hit the ground running.”

Very soon afterward, Echoes in Eternity had released the EP Time is Distance. The sound and style of the band at that point reflected the previous work of both its creators. Into the Negative, which was released in April, marks a deliberate change of direction as they endeavour to create their own sound.

“After we did the EP, to me that kind of felt like a similar area to what Double Dragon had been, so after we really started hanging out and becoming mates, sharing our own musical likes and stuff, we decided to just start fresh. At first we were going to do [Into the Negative] as an EP, but when we started really working on this new sound there were so many ideas.”

The album changes up their original style with a melange of melodic death metal, chugging groove metal and elements of nu-groove. Lyrically, Gardiner drew inspiration from his past and his own journey of maturity since the Double Dragon days.

We wanted to have something that had a positive side, rather than just a lot of death and destruction, to do something that would maybe echo in eternity.
[ Lee Gardiner ]

“A lot has happened since [then],” he says. “Got married, saw the world, and cleaned my act up a bit. Things were pretty crazy back then. I just felt like I had something to say again, from an old man’s point of view!” He chuckles. “I’ve got a few grey hairs now. I just thought it was time in my life to share and if I could inspire just one person to think about going down certain paths, that was what I wanted to get into. And with the music behind it, that kind of inspired me to get these musicians and tell these stories to the metalheads.”

The next step is taking Echoes in Eternity to the people in the flesh. So far that hasn’t been possible, but with a full line-up now in place and restrictions falling away, it’s now only a matter of time before they make their stage debut. Gardnier’s former colleague North even had them on the back-up list for Adelaide’s New Dead Festival in case of last-minute cancellations. They weren’t called up, but the singer went along to his friend’s event, which is now one of the country’s longest-running metal festivals.

“We started this right at the start of the pandemic,” Gardiner says of the band’s inability to play live, “so we had a couple of things that just went astray, but we also thought, ‘Bugger it. While all this is happening, let’s just get our heads down in the studio and get as much content as we can’. But, in saying that, we’re starting to get offers left right and centre. Fingers crossed, COVID will be gone and things can get back to normal.”

Lee Gardiner is staying positive. Despite the title of the album, he wants Echoes in Eternity to be a positive force. Recycled from the title of Apophis’ most recent album, the name is drawn from a quote by Roman emperor Marcus Aurelius about leaving a legacy for the generations and the centuries to come. Gardiner was looking for a name that would steer away from the gloom merchant persona of earlier work, so it stuck.

“We wanted to have something that had a positive side, rather than just a lot of death and destruction, to do something that would maybe echo in eternity.”