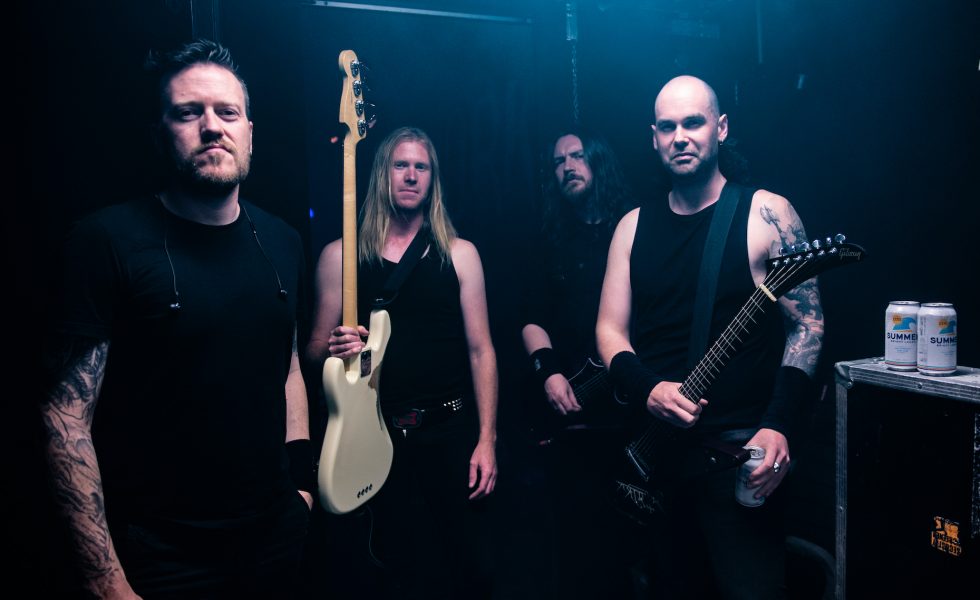 Life is all about learning. No matter how well you know yourself, or your craft, you can always learn new ways to do the things you do.

MORE: CLOWNS: Unleash New Single ‘Sarah’ // TIMES OF GRACE: Jesse Leach On How The New Record Captured Him Reconstructing From The Ground Up REVIEWS: DZ DEATHRAYS: Positive Rising: Part 2 // DESCENDENTS: 9th & Walnut // SLEEP WAKER: Alias // LIGHT THE TORCH: You Will Be The Death Of Me // DESECRATOR: Summoning

For Melbourne thrashers Desecrator, every journey out on the road has been a learning curve. Putting a live album out as their first official release taught them who their initial audience was and established their live-sounding, organic studio sound on the albums to come later.

“It’s always been very important to Desecrator, to have that energy,” frontman and founding member Riley Stong declares. “Coming from a thrash metal background, it’s such an energy-based style of music, such a movement-based, urgent sounding style of heavy metal. Our sound was always rooted in that really organic live sound, and that’s become who we are, and over time it’s developed and carried through even into our recorded material.”

2017’s To the Gallows built on their solid thrash metal cred. The new album Summoning maintains their reputation for pure metal mayhem, but also displays a clear maturity in Desecrator’s songwriting. It was another lesson they learned during what Strong suggests was perhaps their most important tour so far, a European jaunt with Airbourne.

“That was a really big step for Desecrator, internationally, to play to a fanbase like theirs.  Usually Desecrator, on our tours, has been the middle-of-the-road band amongst more extreme bands on line-ups. On the Overkill tour we did, we were playing before Crowbar every night, and they’re much heavier than us. On the Venom tour we did, we were playing before Vital Remains, and they wrote the rule book on blast beats, so we’re always the clean vocal thrash band. But on the Airbourne tour, it was the first time we’d been the extremity.”

At this point in Desecrator’s story, as far as we are in, as individuals and as songwriters, our tastes mature with us. We’re not still mid-20s ragers all the time! Our joints hurt a little bit. Our injuries show through. It’s not like we’ve slowed down on purpose. While we’re still dedicated to the impact and the force of heavy metal, we’re maturing in ways where we think we can transfer that.
[ Riley Stong ]

Going out in front of a primarily rock and roll audience, Desecrator had to adapt on the fly.

“What were they chanting? What was making them raise their hands in the air? They were largely a crowd that hadn’t been exposed to us before, so we had to win them over every single night. We started with arms crossed, and we ended with arms in the air – what was it that was doing that?”

Coming off that tour and going straight into writing mode, Strong and the rest of the band – guitarist Andrew Hudson, bassist Gerad Biesboer and drummer Jared Roberts – analysed those lessons and put them to good use.

“While it didn’t motivate us entirely,” Strong says, “stylistically it coloured what we wanted to do and what songs to put in the set. We came out of that tour learning a lot more than on some of the other tours we’ve done, and then we went right into writing Summoning.”

With Summoning, Strong sees Desecrator as moving beyond thrash and “into the larger area of heavy metal”, with slower epics like A Light in the Dark jockeying for position with pacier cuts like Manic.

“At this point in Desecrator’s story, as far as we are in, as individuals and as songwriters, our tastes mature with us. We’re not still mid-20s ragers all the time! Our joints hurt a little bit. Our injuries show through. It’s not like we’ve slowed down on purpose. While we’re still dedicated to the impact and the force of heavy metal, we’re maturing in ways where we think we can transfer that.”

Desecrator has been sitting on Summoning now for over a year. The album was in the can, film clips were done and two international tours were booked to support it. Then, of course, everything came to a screeching halt.

“We had the rug pulled out from under us. Like countless other bands, we had our momentum – all of our touring, all of our plans, the five or six years that we’d been maintaining in the lead up to Summoning had been part of the grand plan to finally cement our name in the European market. We’d been making so many inroads over so many tours, and then all the world stopped.”

Labels stopped returning their calls. Tours and international travel were cancelled. There was nothing for it but to wait it out. Twelve months on, not much has changed, but the band is resolved to get things done. Summoning releases at the end of August and Australian tour dates have been sprinkled over the next few months into early 2022.

“From where I sit in Melbourne at the moment, it’s hard to predict. We’re into another stringent lockdown, but to be optimistic, we have come out of them. With the vaccination rates and everything at the moment, I think we’re in with half a chance. I’m not stranger to re-arranging shows, either. We’ve done five or six since COVID started. It’s a brave new world, it’s an unknown landscape and you’ve just got to try your best to do what you can to bring entertainment to people. If we all wait, or all sit back and say it’s too hard or say ‘I don’t want to play under those conditions’, then there will be no music, and that won’t only be a shame but it will kill the last shreds of the music industry that are holding on. So we’re going to be part of the rebuilding, and do what we can do, rather than thinking about what we can’t.”