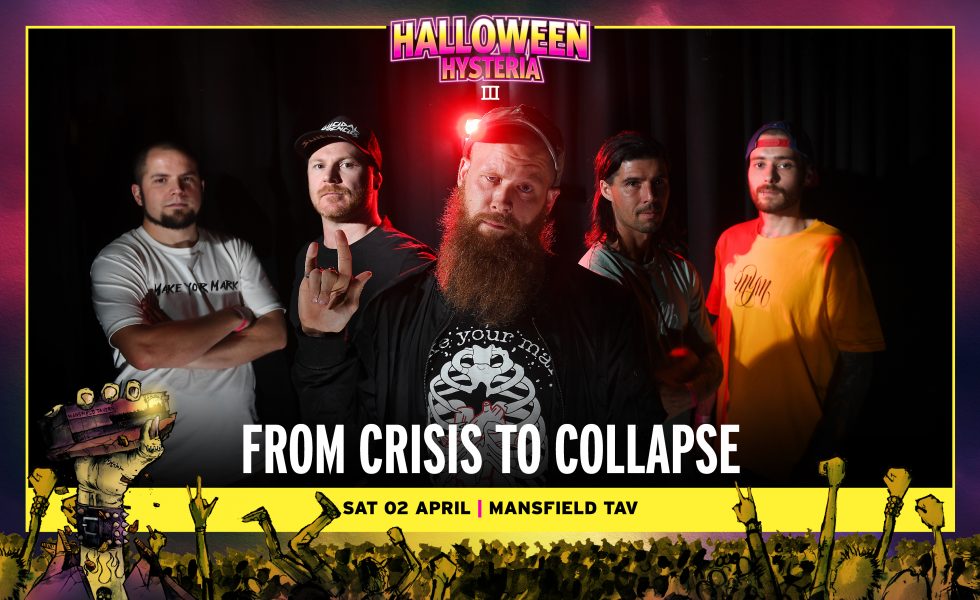 We reckon if you asked any music fan what they’d bring with them to a deserted island, they’d say a set of killer tunes—they’re just as essential as food and water after all!

For the Hysteria crew, we’d have to go with anything by From Crisis to Collapse. With the release of their new single, Needlepoint, just around the corner, and a massive tour planned for April-May of next year including a slot on Halloween Hysteria, the band have been on heavy rotation for us and would feature on our stranded deserted vibes playlists—hands down. We spoke to the legends about what two albums for each member would feature on theirs.

I’d take two compilation albums from the broad spectrum of World Music so I can hear something new and maybe learn some new musical concepts. I’ll give three artists too: Bjorler Brothers in their various incarnations, Metallica (to 1991) and Revocation.

I’m gonna say The Black Dahlia Murder’s Unhallowed and Darkest Hour’s Hidden Hands of a Sadist Nation. They are raw, direct and not overproduced. You can appreciate the technique and dexterity of the musicians, which means a lot considering they are early albums for both. You can also notice both albums are genuine, meaning they are not trying to copy any artist or style. Both bands cared more about doing something they are passionate about, and they believe in instead of trying to be popular or famous; that’s something I respect.

Tool’s 10,000 Days and Parkway Drive’s Killing With A Smile. The Tool album has two magnifying glasses on the cover to see the set up close, which could be used in a very handy way on the deserted island. And Parkway will encourage me to go fishing and fall in love with dying at sea.

If I could only take two records on a deserted island, first up, it would have to be Lights…Camera…Revolution! by Suicidal Tendencies, because it’s my favourite album of all time and listening to those songs transports me to so many pivotal times of my life. And even though I don’t really listen to that album much anymore, I think it would wig the absolute fuck out of me if I knew that I couldn’t listen to it ever again.

The second choice would have to be the official motion soundtrack of the cult classic The Lord Of The Flies. This is mainly because … well, a dude’s gotta eat, right?

The Sound Of Perseverance by Death. I love that album so much because every time I listen to it, it takes me away to different places. It would be a great asset to take on an island.

Next is Exhibit B: The Human Condition by Exodus. I’m very addicted to this record, and I think how Gary Holt plays is pretty fucking cool. The record also has the type of drumming I take inspiration from, which I’m trying to learn and perfect myself.

* not in ranked order

FROM CRISIS TO COLLAPSE  Needlepoint 2022 Tour