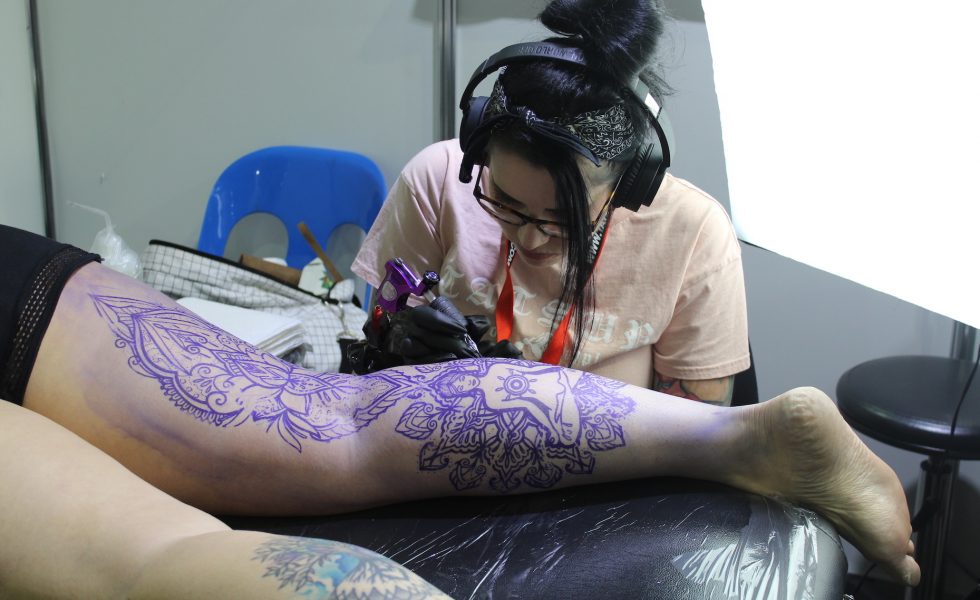 Hosting the biggest Tattoo Expos across Australia, Australian Tattoo Events & Tatsup returned to Brisbane this year after a successful debut run in 2018. With the expectations set high, Brisbane’s alternative community were eager to see how this year’s event would stand up.

With a focus on talent, the 2019 Brisbane Tattoo Expo featured booths for multiple renowned Queensland tattoo studios as well as interstate and overseas artists who were keen to show off their own skills. The carnival style theme for 2019 brought with it an excited ambiance of fun, mischief and awe as patrons began filing through the doors on Friday morning for the three-day event extravaganza.

As you walked through the convention doors and entered the expo, music was blaring, tattoo machines were buzzing and crowds snaked through the walkways surrounding the 260+ artists calling Brisbane home this weekend. Down the aisles lead you straight to the Tattoo Expo’s Main Stage of entertainment, with the booths of this year’s featured artists getting a clear view from their prime spots. Although many of the featured artists were local Queensland legends, Victoria, Tasmania and South Australia also snapped up some spots for their state’s tattooing champions.

There was no limit to the distance some travelled to be apart of the Southern Hemisphere’s largest tattoo event. Amid the heavy Australian artist presence were artists from Japan, Indonesia, Nepal and even a few carni-esque travelling artists were enticed to appear.

@bethany_finlay_pole_aerialist has been a crowd favourite this weekend, stunning us all on the ground and in the air! Don’t miss out on Bethany’s last performance for the weekend at 3pm! Tickets from the link in our bio or at the door! #austattooexpo #tattooexpo #tattoo #bethanyfinlay #tattoolife #inkedlife #inkjecta #tatsup 🎥 @bigjuicex

Maintaining the diverse offerings of the Expo, organises made sure to cater to the many facets of the alternative culture community; so patrons needn’t be heavily inked or even tattoo enthusiasts to enjoy the weekend. There were motorbikes and barber blades, handmade jewellery and alternative apparel, conservationists and taxidermists, piercers and pokers, a motley crew that came together for this weekend of weird (to some) and wonderful.

@venus_starr and co will be hitting the stage in just one hour for the first Coney Island Side-Show performance of the day – grab your tickets from the link in our bio or at the door! 📸 @deathwishvisuals #austattooexpo #tattooexpo #tatsup #inkjecta #fusiontattooink #sabretattooequipment #tattoo #inked #sullen #tattoolife #captainmorgan #brisbanetattoo #tattoos #ink

The primary entertainment point, Tattoo Expo’s Main Stage, steadily rotated through its weekend timetable, offering meet & greets, competitions and performances to wandering patrons who quickly filled up the audience space. The Main Stage highlight, for most, was the Coney Island Freak Show performers who not only held meet & greet opportunities but created, choreographed and performed two engrossing shows each day.

Not one to bring the kids too, the Coney Island Sideshow Performance and After Dark Circus Performance received roaring applause that shook the walls of the convention centre. Combining beautiful costumes, alluring choreography and fear-invoking sideshow acts, it was impossible to pull your eyes away from the stunning scenes.

As the sounds of a circus reverberated through the exhibition hall, the show’s co-host Venus Starr strode onto the stage with a sultry swing to her hips and a shine in her eyes. What followed was two dynamically different shows full of fire, contortion, blades and acrobatics that left you shocked, awed and entertained to the edge of your seat.

Catch me performing all weekend at the @austattooexpo in BRISBANE 12-14th July.

Keeping the stage in good running order was resident Tattoo Expo host and Chasing Ghost’s vocalist Jimmy Kyle. A natural born entertainer and crowd-hyper, the Sunday audience was treated to a surprise – potentially to Jimmy himself—arial performance from the musician who was hooked up to wires before executing an almost-full-circle backflip. It wasn’t graceful and it wasn’t pretty, but the moment held so much of the light-hearted, larrikin-style spirit that encompasses the entirety of Australian Tattoo Expos.

As the Expo came to a close each day, it was time to celebrate the work of the many talented artists who created detailed designs in skin and ink. This year’s Australian Tattoo Series competition saw an influx of talented artists putting forth their work for evaluation and celebration, with all individual exhibiting artists and niche categories now included. Passing by booths you could see those artists lucky enough to earn a Best Of plaque were proudly displaying their award alongside their prints, stickers and flash designs still available.

I’m very happy to have taken out the prize for ‘TATTOO OF THE DAY’ on Saturday here at the @austattooexpo in Brisbane. #austattooexpo

Those attendees lucky enough to leave the Expo with a permanent souvenir also adorned the biggest smiles of the show. The experience of being tattooed at a convention differs from that of being tattooed in a shop, with a steady stream of passerby patrons admiring your new addition while the sound of a hundred tattoo guns and some solid early 2000s music plays as your soundtrack, is something you never forget and well worth the awkward seating positions.

The biggest early birders line we’ve seen in Brisbane! What a day to be getting tattooed, join the rest of these eager beavers down here at @austattooexpo – we’ve got a MASSIVE weekend lined up for you, tix available at the door or from the link in our bio! #austattooexpo #tattooexpo #inkjecta #tatsup #tattoo #inked #sullen #tattoolife #brisbane

As another year is done and dusted for Brisbane’s newest and biggest tattoo event, the Expo is yet another reminder of how the alt-culture community remains stronger than ever in its plight for wider acceptance and body modification empowerment. By bringing tattooing out of the side alleys and into the public eye, Australian Tattoo Events continue to achieve a safe and enjoyable convention that is appreciated by all walks of people. Inked, pierced or clean skin, in the end we’re all human.

Don’t forget – there’s still two full expo weekends to go in 2019! Both the Perth and Melbourne Tattoo Expos are still to come, with another huge list of artists coming along for the ride.