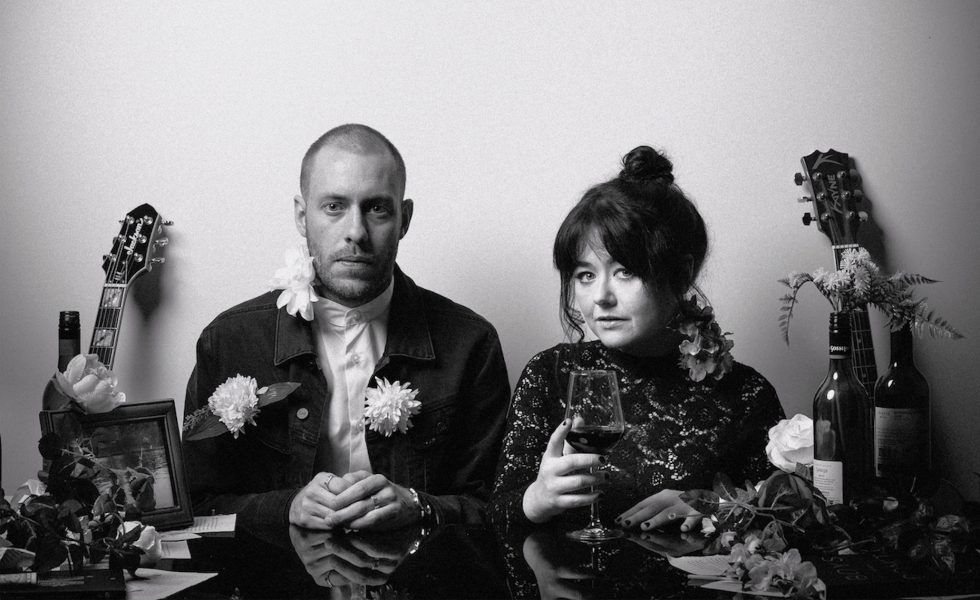 Core Hellion, poet, and conduit for creativity, Matt Gravolin has opened the page on a new chapter of an already accomplished music career: Agnes Manners.

Matt really was at the core of Sydney’s Hellions. Their guitarist, lyricist, and mainstay. Hellions were and are a band that were yet to peak; in a creative and popular sense. Having released fourth record Rue to celebration and acclaim, they embarked on national tours, European tours, the coveted higher slots at UNIFY Gathering. They even nabbed a massive spot at this year’s Download Festival Australia, cancelled due to the COVID-19 pandemic. Touring was a full-time gig, it seemed.

“I was sort of getting a little bit of anxiety with touring so I wanted do it at my own pace,” Matt says. “I would be letting the boys down if I was saying I wasn’t ready to do this or that, it just wasn’t fair on them.”

The feelings were swelling; and eventually a dam broke. A shock Facebook post broke the news in April 2019. ‘Wob’ as he’s known to good friends and cherished fans, decided to part ways with a band he once called home. Details were vague at the time. Throwing light on it now seems prudent, seeing time’s healing power at its height.

“In late 2018 my father passed away suddenly, and I guess I had some little thing that I had been working on on the side, things that wouldn’t have suited Hellions,” Matt says from his home in Sydney. “It was a little bit softer. A bit more palatable for a mainstream audience, I guess. After my father’s passing, as grief tends to do, you sort go galvanise into things that you sort of put to the side or are too lazy to address. I just decided to focus on that, and especially because I wanted to focus on that and a lot of other personal things that I couldn’t. The lyrics just weren’t for Hellions too, I felt like I couldn’t put those words into Dre’s [Faivre, Hellions’ vocalist] mouth, like it wouldn’t have been fair to have been speaking about stuff completely on my behalf, but it’s not really representative of his life of the boys and how they feel. Having left Hellions wasn’t just in order to focus on this.

I find that stuff tends to flood out, like when you’re drinking or whatever else you are doing, with your mates and it reaches a stupid hour of the morning. Then somebody will crack and the flood gates open. It shouldn’t get to that point.
[ Matt Gravolin ]

The fingerprints of Matt’s style are streaked all over debut single As Long As You’re Mine. It’s not a track cooked up in a Digital Audio Workstation and quantised until its humanity’s bled white. It captures a long-thought dead spirit of pop experimentation. Think more Brian Wilson than Timbaland in that sense. Let’s see where Paul and John take us, instead of running it past fifteen different writers.

“Yeah absolutely its more so that way. I guess I did a lot of research for Rue, it was the writing process for this project was sort of an extension of what I learned while writing Rue. Which is just sort of breaching the punk perimeters. Trying music that is good without a label. It just makes you feel good, and I just wanted to let myself run wild without any audience expectation and all that. The Hellions’ listenership has a certain expectation of us. I just wanted to be able to have a clean slate where I get to absolutely whatever I wanted to.”

Central to realising his musical vision is long time friend and producer Shane Edwards, a man unafraid of suggesting a saxophone lead in the middle of a baroque pop meets hip-hop song.

“He was great, he says. “I had written the songs to about an eighty-percent point at home, and even done all the orchestration and all that sort of thing. He’s just great with things that I wouldn’t have thought of. For example, to start it was a run if the mill ballad I guess. He had stumbled across this sort of like 90s drum looping thing and had this vision to make it more like TLC or those big ballads you hear in the early 90s. That gave the song this whole new energy. We then stumbled into this idea for the saxophone part. The track would have been a lot less energetic and wouldn’t have that mood that it does. We’re all about soundscapes and thinking outside the box. Again, we’re not being contained with having to adhere to punk. That was just huge because we could just do anything that we want, and obviously nobody knew that we wee doing it, so it was just no pressure at all and just a big old playground for us.”

It’s understandable he didn’t want to burden what is essentially a punk rock band with a paisley and flower heel-turn.

“Yeah a little bit,” he says. “I had to take the other members into consideration as well, because its all singing I didn’t want force that upon Dre. it wouldn’t have been fair towards him. As for lyrics, it’s all a representation me and where I’m at. It just a selfish thing to sort of impose that upon the band as well.”

If we still browsed record shops like we did in pop music’s heyday, we’d be forgiven thinking Agnes Manners a folksy singer-songwriter with flowers in her hair. Matt deliberately chose a female name to represent his own self-directed masculinity; one that recombines a man’s spine with one’s heart. That the power of vulnerability is not weakness, but intense courage. It’s something Matt cares for passionately.

“There is a vulnerability inherent in all of the songs. I just felt that a female moniker would suit the whole projects better as a whole. The fact that a lot of men… well, it’s a lot better than it used to be, but men have trouble with vulnerability. They just don’t talk. I just really wanted to encourage that because there is certainly a lot of topics you’ll hear on the other songs which are very vulnerable and very open. Yeah, you see lives being saved by discussions of certain things with people who don’t feel like they can have those discussions until they can have them. I really wanted to champion that with this music.”

Men’s emotions are sometimes mistaken, often feared. Joy is confused with being frivolous. Passion confused with anger. Sadness confused with aloofness. Even when a mate reaches out to another mate, both are at a loss for what to say, what to do.

“Absolutely, Matt says. “I find that stuff tends to flood out, like when you’re drinking or whatever else you are doing, with your mates and it reaches a stupid hour of the morning. Then somebody will crack and the flood gates open. It shouldn’t get to that point.”

The vulnerability informed the songwriting, be it consciously or sub-consciously, too.

“Well as I’ve gotten older I’ve had more of an affinity for the older stuff, like delving back into the Elton Johns and the Bob Dylans and even as far as Elvis and that sort of thing,” he says . “It just really made my soul sing in a way a lot of the modern stuff doesn’t. I wanted this project to sort of be a conduit for perhaps a Renaissance of that sort of thing. It was certainly a challenge. It required a lot of study on my behalf but it was a labour of love, like just learning those old sort of chord progressions and old ways of putting a song together, it was a pleasure.

“Lyrically as well, it deals with grief with my father’s passing and my relationship with Charlotte [Gilpin, also of Dream State], which is kind of addressed in the chorus of As Long As You’re Mine. She’s my girlfriend, and…what else have we got on there…” he pauses.

“There’s a lot to do with, celebrity. False celebrity. Like people who are famous for being famous. That just something that has always irked me. It’s something that is becoming even more prevalent in the age of public figures and the dominance of the Kardashians. I’ve always sort of harboured a little reservoir of resentment over that sort of thing,” he laughs. “Just addressing that, and pop culture as a whole. The way things are changing like the whole “woke” culture, and meme culture, that sort of bullshit. I guess some of the songs are embittered in that regard and its not really apart off myself that isn’t very admirable. But its a part of me that’s real and I felt it needed to be addressed.”

It just makes you feel good, and I just wanted to let myself run wild without any audience expectation and all that. The Hellions’ listenership has a certain expectation of us. I just wanted to be able to have a clean slate where I get to absolutely whatever I wanted to.
[ Matt Gravolin ]

Has the culture made real expressions like these more disposable?

“I think that’s a very valid point,” Matt says. “I think it is that way for a lot of regular consumers. Being a musician and an avid music lover, for myself, if something strikes me, I will always remember it and add it to a playlist. I’ll always listen to it and support it and it will inspire my own music. So its actually sort of on the flip side with me. Although it can be disposable, for me the new format way that things are, is made me listen to more music that I wouldn’t have previously been exposed to, or had the means to find. It is certainly a concern with the average consumer, though.”

Matt faced a Sophie’s Choice for Agnes Manners’ first single. It had to stand on its own, yet also represent the rest of his output; which also features John Floreani (Trophy Eyes) and girlfriend Charlotte. Trying to lend the world an impression of Agnes Manners felt more daunting than making the music itself, Matt says.

“Chasing a single is so fucking difficult man, especially a debut single for a new project. Its like choosing your children or whatever, favouring one over another. its just so hard to make an introduction because each song is so different. There are ones that are more heavily orchestrated than I have ever done; there are a couple of six minute, like three part opuses that I spent months and months chipping away at; there are some dark ones that are a little bit more distorted, in the way of Hellions. There is a lot of variety, and although this song sounds that way, that it is  intended for a smaller crowd, for maybe a niche market; but it’s a broad collection of songs. Hopefully it can actually push it a bit further than what might be expected of this song alone.”

Stream Agnes Manners As Long As You’re Mine here.