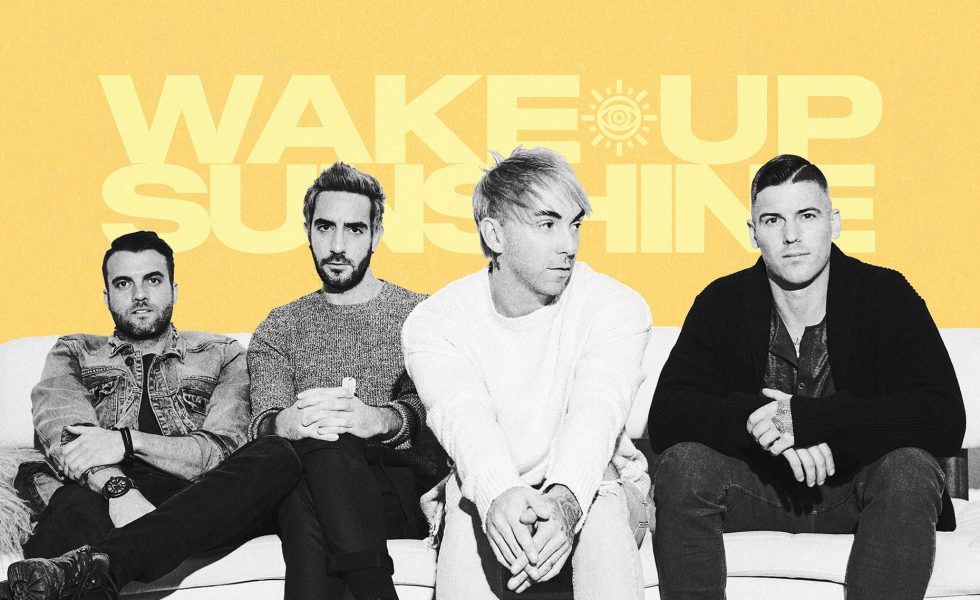 What’s pandemic and isolation like for All Time Low? “I’m trying very hard not to complain about it,” admits the band’s drummer, Rian Dawson.

The Baltimore punk rock outfit have just released their eighth studio album Wake Up, Sunshine, and pandemic or no, Dawson seems pretty pumped. “This pandemic and isolation have forced a new lane of creativity for this band like, “ok, how can we engage the fans? How can we let them know we’re still here, we’re still amped and make sure they are too?

“We’ve been doing happy hours, chat room things, and letting fans know that just because we’re at home doesn’t mean we’re not just at stoked as you are.

“The creativity has been flushed out of us, so it’s kind of nice to sit back and push the work we’ve already pushed into this record.”

Arguably there’s not too much Dawson and co. need to do in order to get people to appreciate the new album–it’s going to be the soundtrack to many an adventure. Wake Up, Sunshine has an overriding theme you can’t ignore, though–nostalgia. That sense of throwback, reliving experience and journeys you’ve had not just with people around you, but solo, sits closely alongside a riveting sense of maturity, too. “Growing up, I think when a record came out and the only thing a band said about it was like, ‘Oh it’s a mature version of us,’ I’d be like, ‘Oh, God!’

“Somehow we all locked in and wanted to write the same kind of thing–there was no ‘we need to go back to our roots’ or ‘we need to write fast pop punk songs—that’s just what came out.

“We got together in Palm Desert–we’d wake up, the four of us, our producers and assistant–some days it would be a full writing day, other days it would like ‘Nah, Zack [Merrick] you go play bass, Alex, Jack [Barakat] and I are gonna go drink margaritas in the pool!’”

Dawson’s several mentions of margaritas might make you understand what track Sleeping In is about, an assumption to which Dawson laughs heartily. All jokes aside, he’s also circled round to mention the song Melancholy Kaleidoscope a couple of times, prompting the idea that, in those post-meditative sessions when All Time Low assessed the significance of their work, that this song has a particular significance to Dawson. “Our producer, Zakk Cervini, came into the studio on the first day with a new perspective.

“At first, I was hesitant, it was too on-the-nose 2003 pop punk. It took shape and set the scene for what Cervini was going to bring to the table. It was his first outpouring of creativity to this whole process, and it really did set the course for where we were headed.”

Nobody listening to Wake Up, Sunshine could claim it to be an introspective album if its creation was as organic as Dawson explains, though lyrically, vocalist Alex Gaskarth has intertwined a lot of self-reflection. “In that though, it’s universal enough a listener can attach it to their own life,” says Dawson. “I’ve always thought that’s what’s incredible about Alex’s lyrics–knowing him for 15 plus years, I can listen to a song and know who or what it’s about. But then if I zoom out, I can also relate it to my life very easily. “I think that’s what’s good about this record. Taking general themes and ideas of people going through life but he has a personal twist, [though] you don’t need to have gone through what he’s done to adapt it to your life.”

“Usually the vocal process is a lot more intimate, but in this case, it was him on the couch at our house, singing around all of us, and it became more like we were part of that lyrical process. It helped us become a part of his story, as well.”