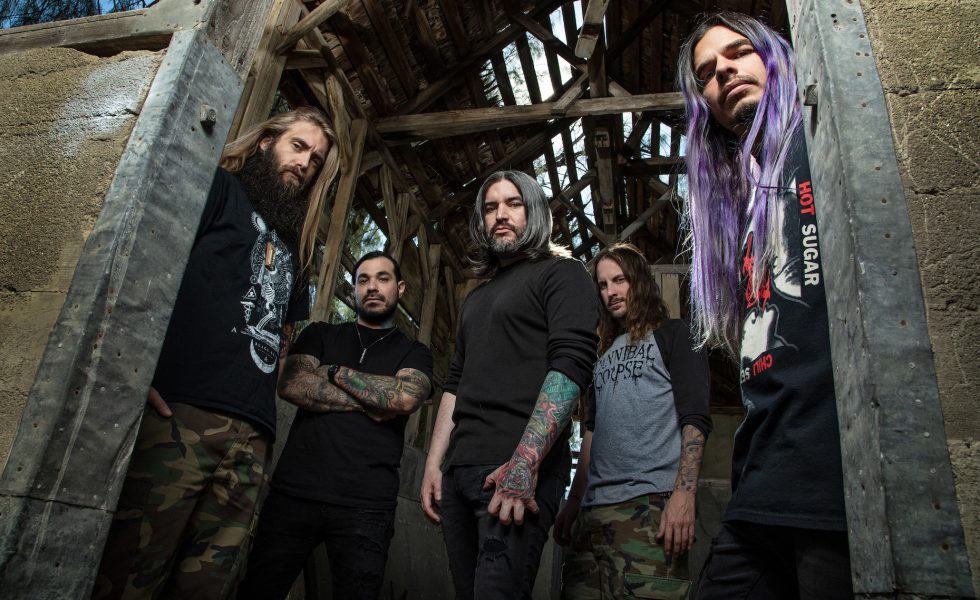 SUICIDE SILENCE // The Band With One Thousand Faces

In 2017, Exclaim, Canada’s leading sub-culture street-press said Suicide Silence’ self-titled album “[had] virtually no redeeming qualities to it.” We even said “[the] album is a war crime against our ears.” One crazed mosher even started a petition to block the album’s release after hearing first single Doris. How does a band come back from that? Can a band come back from that?

A few bad reviews are mere papercuts compared to the gaping wound of losing original singer and dear friend Mitch Lucker. A decade prior, he was a living breathing part of the band. Then, a motorcycle accident stole him from us all.

Lead guitarist Mark Heylmun is living his boyhood dream; playing shows, throwing moshes, getting up for lobby calls at six in the morning. Recording albums, such as Become the Hunter, isn’t icing on the cake; it’s part of that luscious cake of a life Mark has built for himself. Despite setbacks. Despite criticism. Despite losing a brother, a bandmate, a friend.

Speaking from his California home, in full view of memorabilia from Suicide Silence’s past and present, he reflects on that album. The album that inspired more myths than Hollywood tabloids. Read on. You’ll find that Suicide Silence isn’t back. They never ever went away. 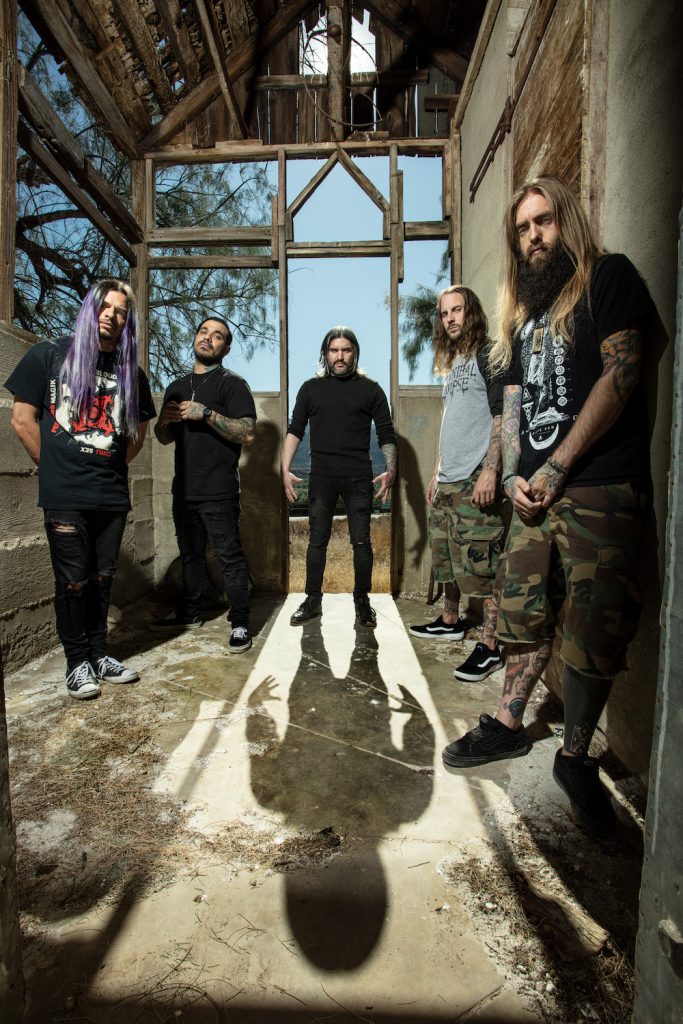 Hysteria: Let’s talk about Become the Hunter. Reviews are saying it’s a return to form. Do you think so, for better or worse?

Mark: I’d like to think that we still kind of upped ourselves on anything. I still think the self-titled record is still a heavy record by all means. Obviously it’s just a different approach, 100% but, the way that I feel about this record and all our records is we always write with our fans and mine and we always write with a live show in mind.

We’re always writing for a full record experience so listeners fully enjoy ripping into it. I think with the last record, that was the only time where we literally kind of put ourselves first as opposed to even the live show or fans or anything else. We got an opportunity to record with the producer that we were really excited to record with and we went full on. We went in every direction we would have never gone before, which like you’ve said for better or for worse, it resulted in a completely different response and a different type of record. And with this one, we just put the fan back up front and took the live [experience] getting right back up front and we went as hard as we possibly could.

The records seems to mix in equal parts death metal and nu-metal. Nu-metal is 20 years away from its peak, and now it’s a “throwback.” Was that a conscious thing?

I think that it’s kind of unavoidable with like Alex [Lopez, drums] and [Chris] Garza [rhythm guitarist]. They’re the nu-metal elements of the band. That’s where it comes from. They’re also totally solid hands in the pot involved in writing. It’s not like I’m writing all the songs. As far as the death metal or, traditional metal kind of stuff that like me and Dan Kenny [bassist] are into that. So there really is kind of the divide and it’s always kind of been that way.

I think especially since now that we’ve done a record like the last record, if you were to go and listen to our whole catalogue, it’s very much more apparent that there was nu-metal influence. People have more understanding of who we are and what we listened to.

We’ve always been a polarising band. I think that people that really like us or they really fucking hate us. It’s been that way for a really long time.
[MARK]

Day one for the band is almost fifteen years ago. Losing Mitch [Lucker, vocalist] in 2012 would have been devastating. It takes a lot of strength to bounce back from that, I’d imagine. You’ve forged on, had some success. How do you reflect on that?

It’s a crazy thing to reflect on because there’s the public opinion and public narrative that everybody can look at. The way that fans and the people and everybody outside of our inner circle look at our story. They get that from what we give them and that’s what they can read about. Then from us, it’s like everything that we’ve gone through, everything that we’ve overcame and everything that still haunts us. And there’s our story and then there’s the actual story that has the way that everyone looks at us. And it’s crazy because I, now that we’ve been doing it this long, I can really look at everyone in the band and just trying to realise how we’re very fortunate. We love doing this.

We still love even fucking the hardest tours where you got to wake up at 6:00am to fly to the next show. We arrive and go straight to soundcheck and barely have time to do anything. All these things. We still live for this shit. It’s all we’ve wanted to do since we were kids. And there’s really nothing to say other than we’re really grateful to still be able to release music and have people give a shit about it.

I feel for me ever since that event, I feel like there’s something that was kind of passed on me and from members of the band. That we’re responsible to remember what kind of influence he had on us and on the decisions we would make. You know, people just like I was saying before, they think about the band because of what they can read and what we’ve said and what’s accessible. But I live and breathe this shit. I wake up and I got pictures of me and Mitch on my refrigerator. I’m looking right now, I’ve got like things that are, that are Suicide Silence from day one to right now. It’s just good to talk to somebody in Australia about a new record that we released. It’s a journey dude. Crazy shit.

Do you think being in a prominent band means there’s a lot of mythmaking that goes on? Is that unavoidable?

It’s not something you really have to live with. I think that it’s a giant game of telephone one way or another. It just depends how you process it and how you really take it to heart or if it really mattered.

We’ve always been a polarising band. I think that people that really like us or they really fucking hate us. It’s been that way for a really long time. And we’ve never really been a critically acclaimed band. It’s not like we release a record and we get 10 out of 10 and five out of five and this is the greatest thing that’s ever happened. People think we’re uninspired. People think we aren’t doing anything new. Great, keep talking about it.

If someone that likes the band can read a review that says something bad, they might step back and think “you guys are fucking idiots,” but I love this shit. It creates this whole other kind of world of how we think about bands. As long as people are talking about us and that’s all that really matters. And we did an extreme test on our last record of how much bad press really means good press. We’ve got new members with an onslaught of fucking insanity. But, you live and you learn. You just keep going and you see where you’ve made mistakes. I try not to be apologetic with anything. I just try to be more thankful for whoever it is that is still giving a shit.

It’s never struck me that Suicide Silence ever courted controversy. But there was elements, on the last record, where people says “this is deliberate, they’re trolling us.”

No, we don’t do anything to upset our fans or be vindictive. But, the vulnerability and the liberating feeling that came from really taking a sidestep on the last record, it left us feeling really fucking good. That’s the thing that when I looked back at that situation and that whole process, that’s another one where I can look at all of our personal lives with all of what was going on at that time. It’s not even worth explaining because the ingredients that made us feel like we really wanted to do this experimentation. In the end we had this amazing time putting that record together and we became closer as friends and as a band, by doing it.

I think that it was bound to happen that whatever we did on the next record, we’re going to probably be much more cohesive and precise based on how loose we were and how much we did not care what people thought about the record. It was just that was really the way that we felt. It’s still the truth, and I wouldn’t change it.

We still love even fucking the hardest tours where you got to wake up at 6:00am to fly to the next show. We arrive and go straight to soundcheck and barely have time to do anything. All these things. We still live for this shit. It’s all we’ve wanted to do since we were kids.
[MARK]

After going through that, is it easier to express yourself?

Well, I think that as far as like expression goes, like for me as a guitar player, I think it really reaffirmed my love for what I think I’m good at. For what kind of riff I like to write and what kind of feeling I like to give in songs. There was no question about it. Once we started working on this record and set the intention behind it, which is just full on brutality back to our sound, pure fucking violence; but writing something that is unnerving. Either you’re going to feel really stoked and get pumped because you write this kind of stuff or you are going to listen to it and be like, “That kind of didn’t feel comfortable” when you wanted to make something happy. So in a way the process that led to the sixth record really laid the groundwork for us to just feel as if we knew exactly what we wanted to do.

What does the future hold for the band now the record is out?

We’re touring the United States and in April and May we’re doing Knotfest and Hammersonic in Tokyo and Indonesia. We’re doing European festivals. We’re going to be putting together a headlining tour for the fall, whether that be in Europe or the U.S., We don’t know yet and we’re trying to get down to Australia in December or January. We’re excited to come back.

Read our review of Become the Hunter here.