SOUNDS OF THE UNDERGROUND: INHIBITOR // The Story Of Abhorrence 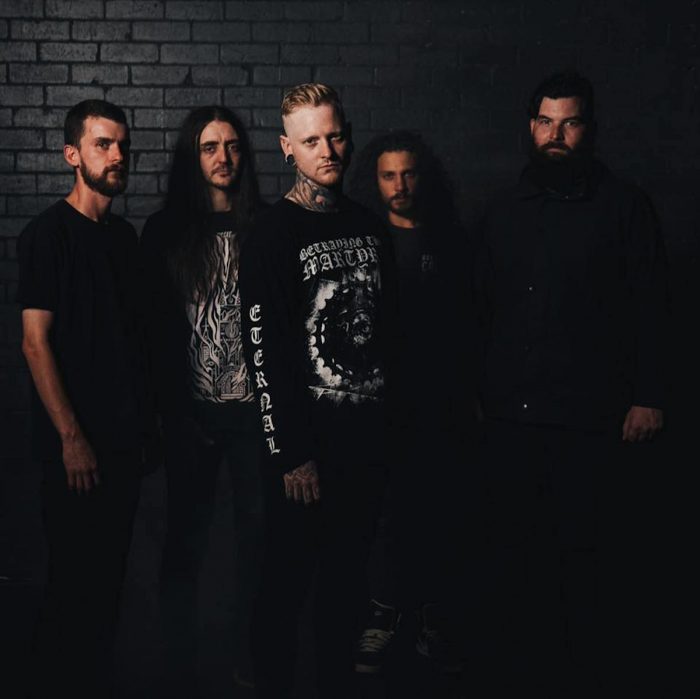 Melbourne based heavy hitters; Inhibitor is set to make their brutal mark on the scene with the release of their debut EP Abhorrence.

We caught up with Vocalist Jesse and Guitarist Sam to have a quick chat about the EP.

So your Debut EP Abhorrence is out now, Can you tell us a little about the story behind the EP?

Jesse: Thanks for having us on board! To me, Abhorrence is my overall view/opinion on the current world’s global problems. From my religious standpoint, mass species extinction, climate change, political corruption, economic turmoil, violence, and the dividing of the human mind through social networking and the digital age. I used to play in a band called Kontact and released an EP called Democide back in 2013 with very similar concepts but always felt I never got my message across to the listeners, so I wanted to bring that back in something I was truly proud of. I am a big fan of poetry and words complementing each other, so I tend to write in open-ended arguments or statements so that the listener can make up their own mind on that matter instead of castrating and demanding my opinion/beliefs on someone else. So, I will leave it up to you to decide what my meanings are.

To me, Abhorrence is my overall view/opinion on the current world’s global problems. From my religious standpoint, mass species extinction, climate change, political corruption, economic turmoil, violence, and the dividing of the human mind through social networking and the digital age.
[ Jesse ]

Can you tell us a little about the process behind the EP? Did you have any inspirations?

Jesse: At the start, it was only Sam and I getting this project going. We both have studios so we bounced ideas back and forth until we had a basic layout. We worked a bit backward on this EP as we had drums already tracked before we decided to track guitars and vocals with Jamie Marinos (Early Alpha Wolf, Advocates, Wither & Boris the Blade) We hid away for 2 weeks in his studio picking the EP apart from what you hear currently. We then decided to call on Lance Prance (Polaris, Alpha Wolf, Boris the Blade & Gravemind) for mastering as his work has always been mental in my eyes for our style. In terms of musical inspiration, Whitechapel has always been one of the biggest influences for me mainly their A New Era Of Corruption album. I believe that’s the best deathcore album ever produced. Phil Bozeman is the true heir to the throne. The main point to this EP was to write music we wanted to hear again over the years deathcore has ground to a halt and you don’t have that 2008-2011 sound popping around anymore. We wanted to bring back some of the sounds that we helped develop in Australia in our early years.

Sam: After I had stopped playing in my old band, I had two songs that I had written but not finished, so I worked on these over the years just in case I decided to record music or get a band going again. Once Jesse and I started talking about getting something going, we worked on these songs in varying amounts and turned them into Loathing and Berserker one of which was released as our debut single and the other will be available on Friday 11th September. As for inspirations for me personally, they vary from Cannibal Corpse to the Bee Gees, so our next album might have us singing in harmony with bowl cuts and turtle necks.

So you guys have an awesome feature by Mark Poida, the former vocalist of Aversion’s Crown on the track Dread, what was it like working with him?

Sam: I’ve always been a fan of Mark’s vocals and bands so when Jesse told me that he was doing a feature I was obviously very excited and knowing that Jesse and Dan are great mates with him I was confident that it would go smoothly.

Jesse: obviously, Mark is an unbelievable vocalist we are so stoked he wanted to jump on board! I met Mark over ten years ago now when I supported Carnifex at Phoenix Youth Centre in my old band Her Majesty and Sam’s band State Of East London and Mark’s band at the time Stand Alone was the opening act and from the moment I heard that dudes voice I knew he was destined to make his mark (pun intended) in the music industry and we maintained the friendship ever since. I already had the lyrics and patterns planned out for his feature, so I sent him the track and he was happy to keep what I had and just put his own spin on it! It was a smooth process, so I can’t complain really, he recorded at his home studio and bounced them straight off to Jamie.

As for inspirations for me personally, they vary from Cannibal Corpse to the Bee Gees, so our next album might have us singing in harmony with bowl cuts and turtle necks.
[ Sam ]

Lastly, what can fans new and old expect to hear from Abhorrence or Inhibitor in the nearby future? Is there more music in the works?

Sam: Well from this Friday, there will be 3 extra tracks available on Spotify being Catalyst, Berserker and Dread with Poida’s feature. It’ll be good to finally get all of the EP released and get some feedback from everyone on these songs. As for new music we have been writing since the EP was recorded last year but that’s about as much that can be said at this point.

Jesse: Well firstly we cannot wait to take this EP on the road we have been waiting for way too long for that! COVID really put a spanner in the works when releasing this EP. In saying that we have been using our time wisely through COVID the EP was written and recorded end of last year and started releasing stuff around February after the bush fires so you can say we have had plenty of time to sit around I can’t give too much away but we have 100% been jamming some stuff. Whether that is a cannibal corpse cover or new tunes I’ll have to leave that a mystery.