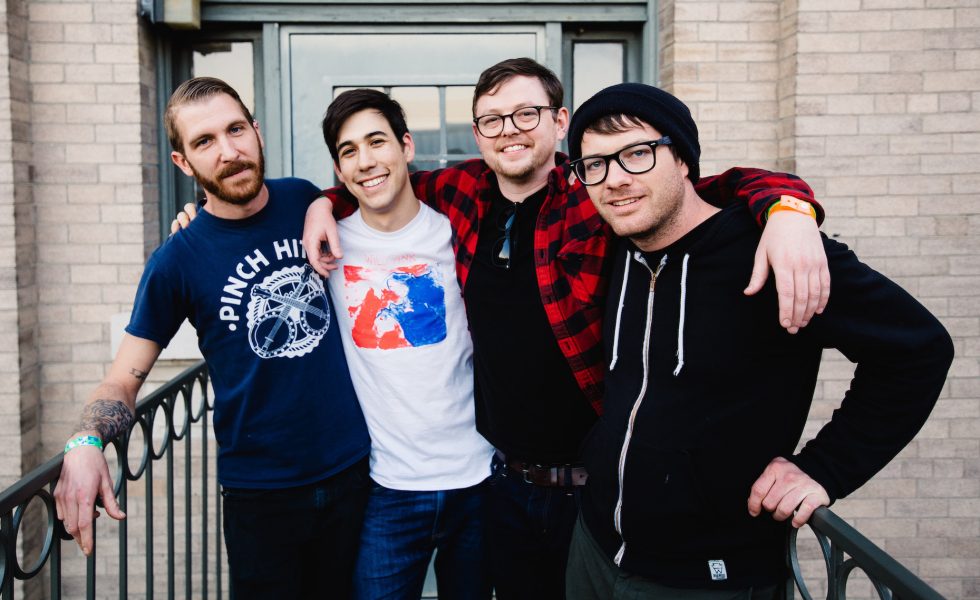 SIGNALS MIDWEST // The Only Constant Is Change

Life is change, and the four members of Cleveland, Ohio punks Signals Midwest know that. Since the release of 2013’s Light on the Lake, the band has seen shifts in their line-up and changes in their geography, and it’s all led to Pin, their fifth record.

Ahead of its release, Hysteria caught up with frontman Max Stern to chat about the band’s metamorphosis, and the impact it had on their sound and lives.

We heard the band was split between three different cities when making the new album. Can you run us through some challenges that gave you and how you overcame them?

Everything we do is very meticulous and very planned out, there’s no such thing as a casual weeknight practice or show for us… it’s not like it used to be. I moved out to Philly about two and a half years ago, I lived in Cleveland my whole life and I thought I had to try something else and see what living in a different city was like. Our founding bass player left and his replacement Ryan [Williamson] is in Pittsburgh, kind of in the middle of Cleveland and Philadelphia.

We would just pick a weekend and convene in his basement and work on stuff and then go off and live our lives for three or four weeks before we’d meet again. Eventually, we had enough songs and thought, let’s go record something.

It’s been said that this album is all about change. Excluding that line-up change, what else was going on with the band when it was being made?

It’s such a cliché thing to say but getting older is the weirdest thing. All of a sudden people start talking about wanting to buy houses and have a career and be settled, they want to dig their roots in a bit deeper. That was never a focus for the majority of the first decade of the band, it was just about how much fun we could have and where we could go that we hadn’t been yet. I think our focus was largely turned inward and wasn’t so much about exploring the world anymore, now we were exploring what we wanted to make our lives into. We’re very much still in the beginning part of that journey [laughs], it’s just crazy that around 30 is when everything starts to get a little freaky.

Isn’t it? Maybe it doesn’t have to be that way for some people but I’ll be 30 in around two months and everyone I’ve talked to has said your twenties are a mess but your thirties are when you’ve figured out what you like and what you want out of life. I’m hoping that holds but I haven’t quite got there yet.

Now when we play it’s just for us and our expression. It feels more pure to me now, I hope that sustains.
[MAX]

What inspired this album lyrically?

The neighbourhood I live in Philadelphia is one of the most radically gentrified ones in America, every other week you see some beautiful old historic home being demolished for a boxy, ugly grey thing. Being in this area where people have lived and existed for a hundred years, and seeing all these new people come down from New York and come up from DC because they know it’s cheaper and moving into all this new construction… it made me think about my place in the city as a citizen of both it and the world.

I’m a pretty privileged human being, being a straight white male I tick all the boxes in the world of privilege. When I talk to my neighbours, who are 65-year-olds from the Dominican Republic who moved over here like 35 years ago to make their way, I just think about how drastically different their experiences must be. I think about what I can learn from talking to them and empathising with them, and how that can make me a better resident of this community. I don’t want to fuck things up and drive up rent prices and go to fancy cocktail bars [laughs]. I’ve been thinking a lot about my place here and how to be a responsible community member so that’s where songs like Pin and Sanctuary City came from.

Pin is the bands’ fifth album, how do you think your sound has changed over the years?

I think we’re more intentional about what we do. There wasn’t really an editing process for our first three records [laughs], we just mashed different ideas we had together and didn’t think about whether they worked or not. The first couple of albums were all recorded live in a room with whatever gear we used to play shows, but now we’ll write a song and pick it apart and try to be a bit more self-evaluative. We don’t want to overplay things though, we just want to give the songs space to breathe. If you had told me at 21 that, at 29, I was going to make a record that opened with a piano ballad I would’ve said fuck you [laughs]. We did do that on Pin though and it feels cool to see our sound evolve in that way.

Now that you’re eleven years into the band, do you find it hard to keep that energy and passion going?

A surprising thing for me is that, even though we’re doing the band less these days due to geographic and time constraints, I’m enjoying it more than I ever have. When I was younger and spending all those months on the van on tour, I don’t think I fully appreciated it for what it was. Now that I don’t have the luxury of all the time to do this, I discovered how much joy is in the making of the songs and the making of the sound. I got excited to play shows again and wasn’t worried about who was going to be there. Angling for a support slot, being on a label and worrying about getting on a festival… all those things have gone out the window. I spent so much time thinking about that in my early to mid-twenties,  now when we play it’s just for us and our expression. It feels more pure to me now, I hope that sustains [laughs]. I don’t know if it will but I think if we were going to have stopped playing, we probably would’ve by now.

With the album out, what else does the band have planned for 2019?

We’re doing 12 or 13 shows scattered throughout the Midwest and the East Coast, I kind of took this touring schedule and modelled it after how bands tour in Australia. In the States, you go out for two weeks or a month and play shows every single day but in Australia, you do not have that many cities so bands usually pick good nights of the week to play. I borrowed that idea for this run and it works better with our schedules because we don’t have to take that much time off work.  We want to do some other things in 2019, I REALLY want to get back to Australia… it would be my fourth tour there and the one that Signals did in 2018 was some of the most fun I’ve ever had. I also really want to go to Japan, that’s number one on my list. I’d like to record again soon and not wait three years between releasing records. Above all, I just want to keep making space for this and doing it in a way that’s fun and feels pure. That’s one of the great things about being in a DIY band, you don’t have to please anyone but yourself [laughs].