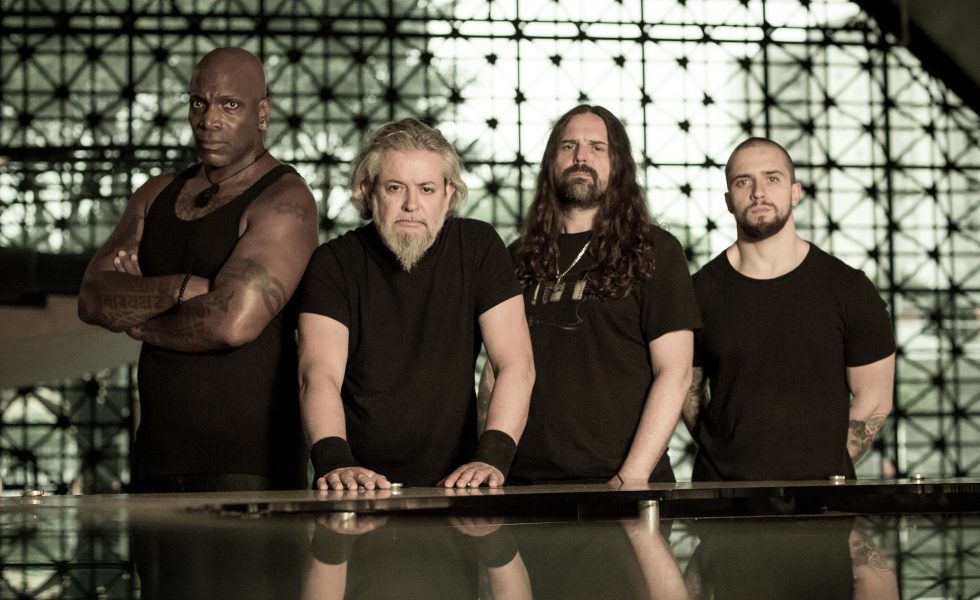 Locked down mere weeks after releasing their most acclaimed album in two decades, Sepultura had to keep their creative engines ticking over as they waited for the world to reopen.

Their weekly podcast SepulQuarta became the vehicle via which they could stay in touch with their fans, remain creative together and reach out to friends and colleagues from around the globe to reinterpret songs from their back catalogue. Those spontaneous jams have now been collected onto an album showcasing the best 15 moments from that podcast that include tracks featuring members of Trivium, Megadeth, Anthrax, Periphery and DragonForce, among others. From his home in Sao Paolo, guitarist Andreas Kisser was eager to discuss their “accidental” album and how special it turned out to be.

Hysteria: How are you, Andreas?

Andreas: Good man! I am at my house, in my bunker here in São Paolo, excited about the new album. Anxious as well, working to getting back on the road, depending of course on the government and borders and all that stuff. But it’s great to see, little by little, shows and concerts are coming back, but everything’s fine.

It’s to be expected a band like Sepultura to have come up with something to keep yourselves busy, but no one expected something like this.

Especially us! We didn’t plan to make an album out of it. It was a real surprise to us too. Imagine, for us – in February 2020 we had this really cool album out, Quadra. It was really well received, positive, we had an amazing calendar to go out on the road. North America in March and then Europe for the festivals and whatever. All of a sudden, second week of March everything stops. We couldn’t leave Brazil, we couldn’t tour, we couldn’t do anything. We didn’t how long it would take – six months, seven months, a year. We’re still here! So we decided to make this event every Wednesday to keep the band working, keep the band alive, talking to each other, talking to the fans, performing our music. We started to invite people, musicians we knew from around the world, to play our songs. It was a great way of keeping [things] alive, in our houses. Because Sepultura’s a touring band. I would never imagine Sepultura [being] possible without the stage and without touring, and then here we are. So the SepulQuarta event was important for us because it let us keep our heads working and creating ideas, but we didn’t plan to make an album. Every Wednesday was a different story, it was very unique, according to each other, but when we stopped in December 2020 we realised we had some amazing material on our hands. The guests involved and the setlist represents a lot of the career of Sepultura, and we decided to remix everything and remaster, and here it is, an album that we didn’t plan and it kind of created by itself. It’s really great.

It just came together accidentally. The guest list is like you just got your phones out and asked everyone you’ve worked with over the years to join you. Who was it who chose which songs they got to play on the podcast?

It wasn’t a rule. When we started SepulQuarta, the idea was to play the Quadra stuff. Then we developed it to jamming with recorded drums, and then we were actually playing our instruments and then we started to invite the guests. We started with Scotty Ian (Anthrax), we started with playing Cut-Throat. It’s a song that we’ve played [together] before when we were on tour. With Dave Ellefson (ex-Megadeth) we did Territory, for instance, that was a song we did many times in Metal Allegiance, and he jammed with Sepultura before. We had three drummers on Ratamahatta, it’s the obvious choice, it’s very percussive. We had three girls as singers on Hatred Aside. There are a lot of singers on the original recording. Danko Jones – he knows a lot about Sepultura, probably more than we know ourselves. He’s a real follower of Sepultura – a doctor! Dr Sepultura! So we gave him some options, and he wanted to do Sepulnation. It was very open. We also used this opportunity to do some B-sides and songs we don’t play live. Slaves of Pain, Hatred Aside, Vandal’s Nest… songs I don’t think we’ve ever played. Vandal’s Nest, for example. It was an opportunity to present a different version that we had on the album, and it gave us this new version on the album which is very special.

It’s interesting that you chose some of those songs, because something like Vandal’s Nest would be fairly obscure even to some of your fans. That is special. You’re not just going out and doing Troops of Doom again.

Exactly, and Roots, as well. The opportunity was there to do something special, something different, and we gave our guests total freedom to do the performance they wanted. Danko Jones, for example, again, the way he sings Sepulnation was his way. Totally. There was no direction. Devin Townsend doing the leads for Mask, Rob Cavestany (Death Angel) doing the stuff on Apes of God… We created a new extra part for Alex Skolnick (Testament) to do a lead on Vandal’s Nest. It was very free and very open. It was truly a journey, and it truly a jam because we never practised. We never had rehearsals and just played our parts when we got together.

If it wasn’t for the fans being behind it and watching the videos, it wouldn’t be possible. That album is for them. They made the album possible.
[ Andreas Kisser ]

With that, were there moments that leapt out at you about the arrangements that made you think, ‘Why didn’t we do that when we first recorded this?’

It was always a great surprise. Danko Jones, again, was the most different. I didn’t know what to expect because he’s not from the metal world and he has a very unique way of singing, and he did a really great job. Also, the acoustic version of Kaiowas with myself and Rafael Bittencourt from Angra was very special because it was something like a guitar duel, which I never did with Sepultura. So it was very different. And Ratamahatta with three drummers was great! Three Brazilian drummers together. It was fantastic!

It must be great for you to be able to reinterpret your music that way, and have that Brazilian connection too. Going back to that album, Roots, that was really Sepultura coming out as a Brazilian band and going into your heritage, and there are a couple of songs from that album on SepulQuarta.

We didn’t plan to make the album, so the setlist is very spontaneous. We didn’t think about the concept – the concept was to play every Wednesday. Of course we had the idea of doing B-sides and use every Wednesday differently. Of course we did Arise, we did Territory, we did more known songs, but there was a lot of Wednesdays! It was a whole year, a lot of work, a lot of production behind it. But we did it as a band, as a whole crew, including the fans. If it wasn’t for the fans being behind it and watching the videos, it wouldn’t be possible. That album is for them. They made the album possible.

What was it like getting Phil Campbell in to do one of his songs that you covered?

Amazing, man! That’s my favourite really, because that’s the only non-Sepultura song on the album, but almost a Sepultura song. Orgasmatron is adopted! It’s an adopted son! And Phil Campbell is our brother. He’s a great friend and it was his first album with Motörhead as well, Orgasmatron, and he was a co-writer. It was very special for both of us. It was a great way to close the album. We did it in 92, and now we have it with Eloy (Casagrande – drums) and Derrick (Green – vocals) and of course with Phil. The first note that he does on the lead, you know it’s him. It’s so strong, It’s amazing, beautiful.

Looking back over time, you must feel incredibly lucky. It’s been 35 years and there has been a lot of turmoil with this band over those years, but you must feel very fortunate that you’ve been able to do this over such a long time, in the same band, because you’ve been the constant there for almost the entire time.

Absolutely. Myself and Paulo since 1987, and it’s an amazing journey. Who knows how long? But it’s great, you know, with music you can go on stage until you’re 90 years old! You see blues players, classical music players… the Rolling Stones now. You see Metallica, all the thrash generation getting older, still making new stuff, still playing stadiums, still getting momentum. It is a profession where you can go on forever. If your hands move and you can go up on stage, anything goes. It’s something really amazing that inspires us, and even with the ups and downs we’ve had amazing times with an amazing record label, amazing management, the line-up, the fans… It’s great to be still here, with Sepultura, facing the challenges everyday – pandemic or not. To have a band like Sepultura, it’s always a challenge, every day, and the pandemic reinvented Sepultura without a stage, which I thought was impossible.

You could have done something like a live stream, had you been able to do that, but this is something very different. It’s interesting too that you have someone like Matt Heafy on one of the songs (Slave New World) and how inspiring it must have been, because he would have only been a child when you first did that song. A guy who was a kid then, goes on to form his own band which is huge now, coming in and playing on that track with a band that was obviously a major inspiration for him to go on and form a band.

It’s fantastic man, because it’s what heavy metal is all about. It’s about family and generations, listening to the vinyl of your dad or your uncle, older brother or something. It’s a very traditional part of all our lives and our stories. This is something that’s great to see when we work with those guys, the excitement they have to work on an album or do an event, either the guys who inspired us like Anthrax, Megadeth, Motörhead, the same with Trivium and Periphery, Crypta, Torture Squad… it’s very inspiring that Sepultura somehow touched all of them, and it was very professional from all of them that they were able to send their material in time for use to organsie, edit videos, etc. When I told them we were thinking of doing an album and they had to sign a release form, all of them were fantastic. Very easy, very quick. No hassle, no ego trips. We felt like a bigger Sepultura family. Besides our fans we have the support and respect – mutual respect – of all those friends. It’s an amazing album because of that, because of the era, 2020, at our own houses, making it happen.