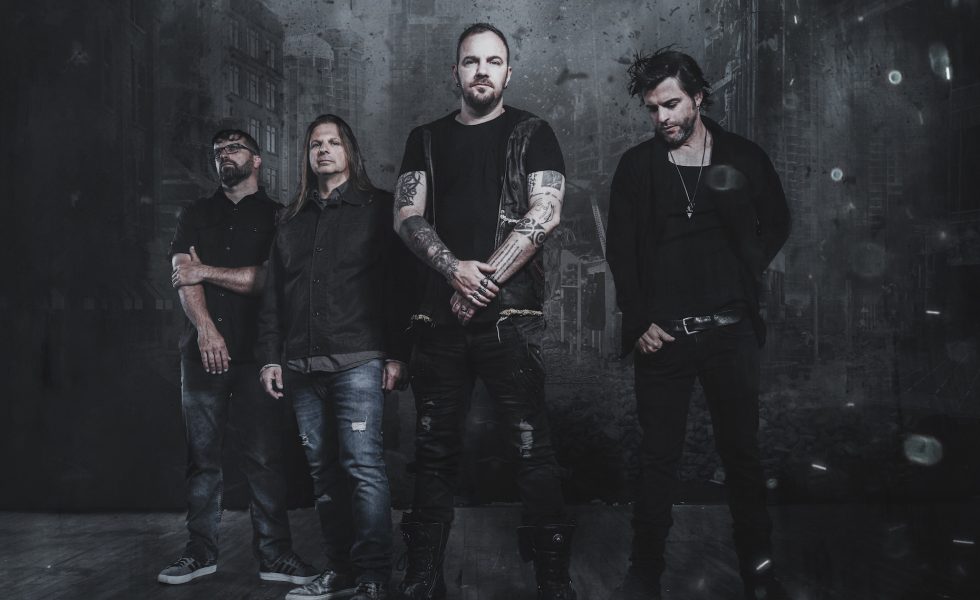 Released just months after Gontier’s departure from his previous band, their debut made the US Billboard Top 30 and Saint Asonia toured with Disturbed – then seemed to disappear. Four years on, the line-up now features Mushok’s old bandmate, drummer Sal Giarcarelli, and the singer’s cousin Cale Gontier on bass for their second album, Flawed Design, on which they worked with friends and colleagues from Godsmack, Starset, Breaking Benjamin and Within Temptation.

Adam, it has been four years since we last had an album from Saint Asonia. From the comments the songs have been receiving on social media it looks like plenty of fans are enjoying what they’ve heard so far.

It’s been a long time coming. We’re really excited that it’s finally here, and it seems like people are pretty stoked about it. It’s a great thing. We’re pretty happy.

You have worked with a few guests on Flawed Design. Sharon den Adel from Within Temptation sings on Siren, Keith Wallen is on Beast and Dustin Bates from Starset co-wrote Ghost. The first single, The Hunted, of course has Sully Erna from Godsmack singing with you. You all go back a long way, so how was it to be able to have him come in and appear on that track?

We’ve known Sully for a long, long time. Staind and Godsmack are both from Massachusetts and so they go way, way back. Mike and Sully wrote that song a few years ago. It was initially for a movie soundtrack, and I guess that never panned out. So during the process of writing songs for this record, Mike brought the song back out and thought it would be a good addition to this record. We put it together and it turned out real great, and it just made sense to have Sully sing on it, if he wanted to, and we just got real lucky that he was part of it with us.

The Fallen is likely to be a track that is going to connect with a lot of people.

That song came together pretty quick. I wrote it as a tribute to Chris Cornell, Chester Bennington and Gord Downie, the singer of the Tragically Hip – three artists who passed away quite tragically. It came together pretty quickly. I just sat down with an acoustic guitar and then I passed it on to the other guys and it turned out to be one of my favourite songs on the record, for sure.

So we’ve already started that process. We’re not interested in taking another four year break between albums! It’s definitely exciting to be playing these songs.
[ Adam Gontier ]

The album has been a while coming, as you said.

It took about a year longer than we hoped. Usually it varies between records. It works out that you’re touring for about a year and a half, then making a record for a year and a half, so usually a record comes out every three years, or something. It’s been four years for us. I had some personal things … we started writing, I guess, probably late 2016/early 2017. We started the writing process, we did demos and that sort of stuff, and then I had a few things happen. In 2017, my son was born, my first child, and there was a few things that happened in my personal life … so we went on a hiatus. I looked after some things that I needed to, and I think the record turned out better than we even thought.

When you become a father, it can certainly change you as a person and as an artist. So how do you think that has changed you?

It certainly changes you, that’s for sure. I think the main thing is that the big picture is not just about me. I spent years and years … and I was quite a bit younger too—you spend years on the road touring and partying and you don’t really have a lot of regard for other people. It is … it can be … a very selfish lifestyle. Becoming a father has completely gotten rid of that! The amount of work I now put into the songs, the record, the shows—everything. It all has a completely different purpose now. It’s changed me for sure and definitely for the better, and helped me to put my priorities in place and be the best person that I can be.

Has it changed your songwriting in any way?

Well, I wrote a couple of songs about him being born and how it made me feel and what I was going through while he was being born, but for the most part I write the same sort of songs I always write. The lyrics are from the same place. Any feelings that I have about any situation, and sometimes the songs might sound a little darker, because I’ve always used my songs to let go of things, to release them.

You must feel very fortunate that you and Mike have been able to gel so well together as a team. So far it seems to have been working out very well for you.

That’s one of the reasons we decided to move forward with Saint Asonia and make a record. We started out working together to do a song or two, and we had no plan to do a band together or any of that stuff. But because we ended up working so well together our personalities just worked so well together that it gelled, it meshed and we ended up writing a lot more songs that we planned on for the first album, and we decided to continue to do it.

Having taken such a long time to get this album written, are you already working on new material for a follow-up?

We’ve got lots of ideas. That’s the thing with Mike and I working together. Mike has a lot of music, and he’s always writing, and I am pretty much always writing as well, so when we’re not touring, we tend to be at home working on music, separately and sending ideas back and forth. So we’ve already started that process. We’re not interested in taking another four year break between albums! It’s definitely exciting to be playing these songs. We’re not sick of them yet and they take on different lives throughout the process. These songs are still pretty new to us. They’ve been through a lot of lives, and we’re looking forward to hitting the road and playing a bunch of these.

Is Australia part of your touring plans?

I’ve been to Australia once before, maybe twice, and I’d love to come back. We’re going to set up some tours in early 2020 and we’re going to get overseas for sure. We’re making plans for Australia—we’re definitely going to be there.