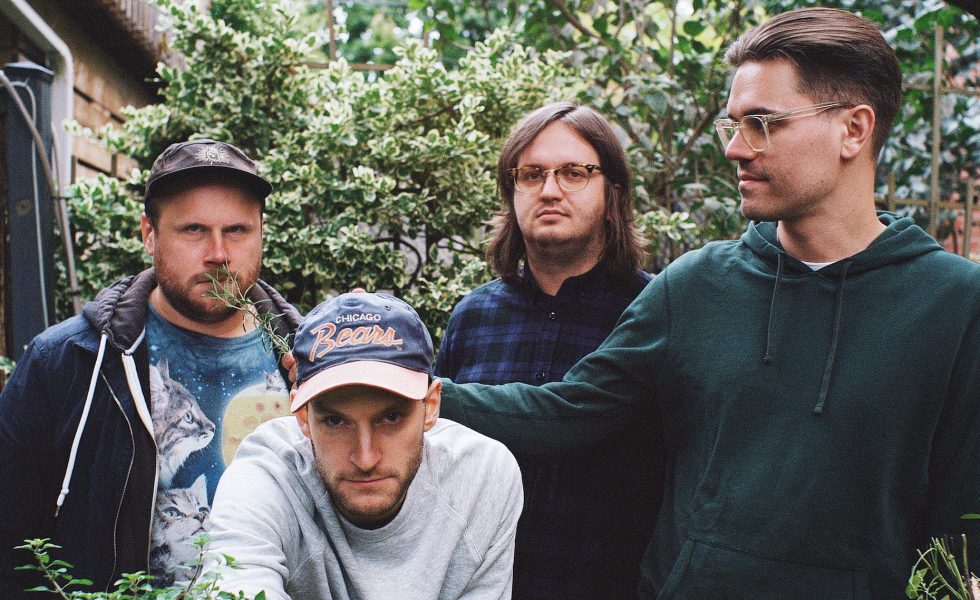 Apr 15, 2019 / WORDS Bryget Chrisfield. / "We're actually best friends who are having fun and sorta prodding the darkness together"

Songwriting helps Stefan Babcock “examine [his] own twisted brain” and laugh in depression’s face. Through his band PUP, and their brilliantly insidious third record Morbid Stuff, the singer-guitarist hopes to normalise mental health issues and “celebrate how fucked-up everything is with a bunch of likeminded people.”

“I think it’s important for anyone who is like me to remember that [stifles laugh] having a mood disorder doesn’t give you carte blanche to be an asshole,” Stefan Babcock, frontman for Canadian pop-punk band PUP, opines. “You can be an asshole and be depressed; they’re not mutually exclusive.”
Our conversation veered here after Babcock unpacked the chorus from Free At Last (“Just ’cause you’re sad again, it doesn’t make you special at all“) – one of the standout tracks from his band’s striking latest Morbid Stuff set. “There was a couple of things I was thinking about when I wrote that,” Babcock reflects on composing Free At Last, “one of them being that there’s this kind of glorification—or fetishisation—of depression, which I think is just disgusting and awful … I don’t really know how to verbalise it, but, you know, there is this kind of like myth of the tortured artist, right? In that people who are depressed are, like, more artistic—or part of some sort of special club—and I fucking hate that so much; I can’t describe the amount of agony that goes on internally when I hear that. So a big part of this record, for me, was trying to normalise depression or mental health issues.

If you’re like me and you have mood disorder—I mean, you can blow things out of proportion very easily. You know, whatever the circumstance maybe I can, like, be making a pizza and burn it and think that the world is over and I just might as well give up on life.
[ Stefan Babcock ]

“You know, it’s something that really affects so many people from all walks of life and it shouldn’t be a thing—it should be a thing that we look on as unfortunately somewhat normal and not a thing that makes you part of a special club. And I guess the other thing that I was kinda thinking about when I was writing that song: it’s a reminder to myself and to other people who are like me, you know; I forget I’m surrounded by people who are so kind and caring and empathetic to my situation, and sometimes I take that for granted. I can treat people like shit, on occasion, and rationalise it to myself that, ‘Oh, it’s just that I’m depressed and they’ll understand,’ and they always do—’cause those are the kind of people I’ve surrounded myself with—but that’s not fair!” he laughs, guiltily.
“I think that part of normalising this kinda stuff, part of the goal, is to just make it easier for everybody to talk about. And, you know, I struggle with whether I help or hurt that cause, but I think this band—and I hope this band—is helping people talk about it, and helping give people the language to speak clearly and openly about it—I dunno if it is, but that’s kind of one of the goals.”
PUP initially formed under the name Topanga (after their communal ’90s sitcom crush: Topanga Matthews from Boy Meets World) while Babcock was studying at Ryerson University. After recording a ‘school project’ song with Nestor Chumak, Babcock soon joined the bassist’s friendship trio—which was rounded out by guitarist Steve Sladkowaki and drummer Zack Mykula—all of whom played in a number of bands together throughout their childhood. Topanga became PUP, ahead of the release of their debut self-titled album, after Disney rebooted Boy Meets World as Girl Meets World (which the dudes deemed blasphemous due to the “corporate gutting” of their teenage obsession).

The reason I write songs, and the reason I play in this band, is to kind of work through darkness
[ Stefan Babcock ]

Album number three, Morbid Stuff, also marks the third time that Dave Schiffman has sat in PUP’s producer’s chair. Listening to Morbid Stuff, you’ll undoubtedly find yourself bopping away to jubilant-sounding riffs. But, be warned: once Babcock’s desolate lyrics enter the scene you’d better prepare for that imbecilic grin to be smacked clean off your face. He has cracking diction as well, so there’s no escape. “I have a tendency to kind of over-enunciate,” the singer-guitarist admits with a chuckle, “because I’m Canadian and that’s what we do.”
There’s a sentence in the album presser that claims Babcock has made a breakthrough in terms of how he manages his depression these days (“… his depression allowed him to laugh in its face”). “I think songwriting has helped me do that,” Babcock allows. “If you’re like me and you have mood disorder—I mean, you can blow things out of proportion very easily. You know, whatever the circumstance maybe I can, like, be making a pizza and burn it and think that the world is over and I just might as well give up on life. And songwriting, for me, has … kind of pointed out how ridiculous it is, and so it’s just been a really good outlet for me to kind of examine my own twisted brain. And as a result I can kind of laugh at how ridiculous it is that I feel this way, you know, even though objectively things are quite good in my life right now.
“I mean, I think that—what’s that saying, ‘The definition of insanity is doing the same thing over and over and expecting different results’? That kind of is how I feel about a lot of my life! Um, where I feel really bad or I overreact to something and when I calm down I think, ‘Okay, well I’m just not gonna do that next time, because now I know it was an overreaction, or it’s ridiculous.’ But then the next time comes around and the same thing happens,” he sighs, before adding, “You know, sometimes we’re not much more than our chemical makeup and so it can be challenging.
“The reason I write songs, and the reason I play in this band, is to kind of work through darkness,” Babcock explains, “and, you know, the four of us play in this band because it’s fun and cathartic, and a good time for us … We’re actually best friends who are having fun and sorta prodding the darkness together, if that makes sense … It’s a chance for the four of us to kind of like celebrate how fucked-up everything is with a bunch of likeminded people, and the hope for me—and the hope for the other guys—is that everyone who comes to the show is gonna have a similar experience to us in the sense that they experience some sort of release and catharsis, as much as we do.”