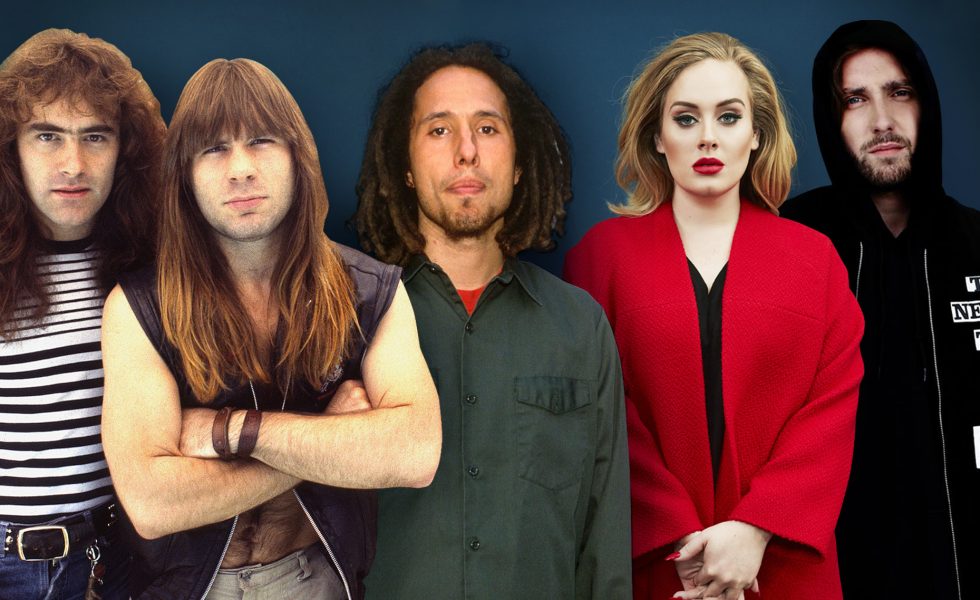 Do you ever hear a song and your brain automatically plays a different song? This happens to us so often, we’ve put together a Hyst List of a few musical bamboozles.

Whether it be in the middle of the supermarket, at a music festival, or even at full blast on your favourite radio station while stuck in traffic, you’ve surely experienced this confusing emotion more than once, and you’re not going crazy.

Here are some of the crazier ones that we’ve unearthed in our internet travels.

You Me At Six: Fresh Start Fever // Adele: Turning Tables

Sometimes, small similarities can make a huge difference to the way a song is portrayed, this is definitely the case with similar piano parts coinciding the beginning of two works of art that go on to become two completely differently shaped masterpieces.

Other times, the similarities can become a huge copyright problem, when samples are not used correctly. Vanilla Ice borrowing Queen & Bowie’s sample was not, although a deal went on to be thoroughly negotiated (for a likely hefty amount). The songs both still continued to graciously top charts when resolved, with proper procedures followed throughout the future!

With the struggle for originality becoming a slight issue within music, the use of fragments from previous works is more common all around. This is an example of a melody that’s been sampled with the right permission. Ariana takes an absolute classic song and progresses to spit fire.

The controversy between Iron Maiden and Papa Roach has been endless; back in its day, Last Resort took a lot of negative feedback from people claiming the band had ‘ripped off’ Iron Maiden. It’s great to see both songs still blow up when spun.

Hallowed Be Thy Name

Rage Against The Machine: Wake Up // Led Zeppelin: Kashmir

All we can say about these two is that the intro riffs are hugely similar, and continue the saga of songs that undoubtedly remind you of other songs. Although, this similarity is a lot more subtle within the remastered versions.

Boys Like Girls: The Great Escape // We The Kings: Check Yes Juliet

These two are basically the same song with a twist; their catchy choruses go hand in hand, and could both easily swap into the other song. Nevertheless, both songs have carried on to be outright 2000s pop-punk bops. Check Yes Juliet is definitely still heard in 2019.

It is without a doubt that Avenged Sevenfold took slight inspiration from Metallica’s Sad But True. It’s astounding that no action was taken towards this similarity, the bands simply had a laugh about the similarities and moved on. But hey, who wouldn’t take inspiration from legends such as Metallica?

Bring Me The Horizon: Suicide Season // The Ghost Inside: Avalanche

Similar thoughts are triggered throughout both these songs, but especially during the beginning riffs. The two pieces shed light onto the way both bands have aggressively developed into completely different images and markets.

Orb carries on turning heads in huge Sabbath style, reloading the modern doom metal genre and taking on the world one orb at a time. It is no surprise that Orb constantly remind people of the monumental metal pioneers Black Sabbath.

Surely the Depeche Mode guys drew inspiration from Thomas the Tank engine when composing this stunning intro! Instant thoughts when listening to Never Let Me Down Again travel straight to this theme song. (I can imagine Dave Gahan waking up in a heroin afterglow, hearing the Thomas theme, calling Martin Gore, telling him “LISTEN TO THIS” and shoving the receiver at the TV. This may have actually happened, who’s to know?—Ed.)

Never Let Me Down Again