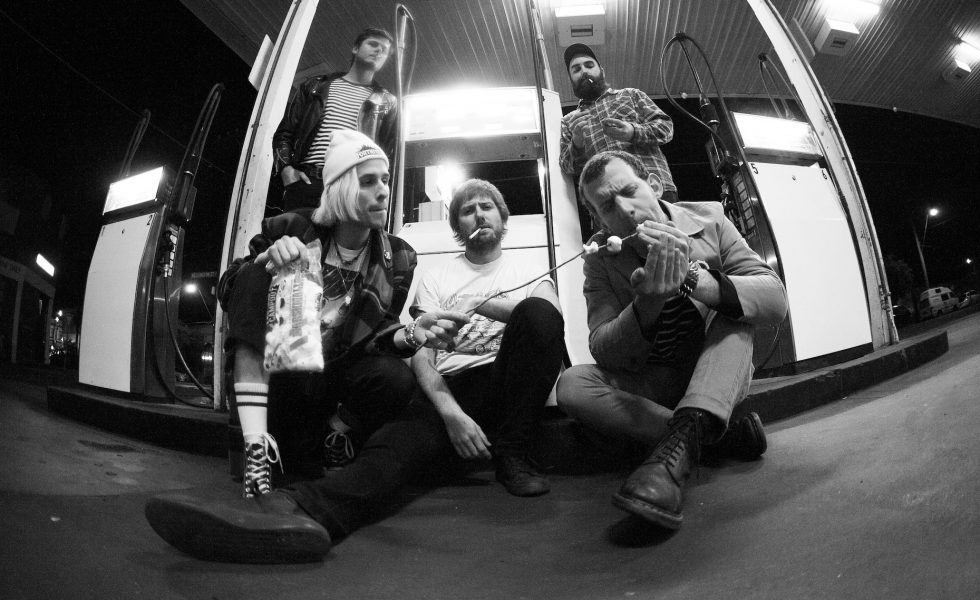 Melbourne based rascals Private Function have been making their mark within Australian punk-rock since first declaring that PF was “Still On Top.”

MORE: SLIPKNOT: A Step Further Into Hell // KILLSWITCH ENGAGE: On The Other Side, Dawn  REVIEWS: SLIPKNOT: We Are Not Your Kind // SKYND: Chapter II // PRIVATE FUNCTION: St. Anger // WAAX: Big Grief

While Private Function‘s social media distribution is based on their strong meme game, their live shows could be highlighted as a destination for those keen to cut loose. Their album cover’s also rouse humour, which can be clearly sited on St. Anger, which was released via Disdain Records on 16th August.

Private Function’s bassist, Joe Hanson, gives a lil backstory to the inspiration behind their music and the album’s cover itself as beginning that, “We’re all big Metallica fans and I think we always just kind of considered Metallica to be this real sort of funny enigma and everything about them and everything that they do, whether it’s great or it’s absolutely terrible, is just really interesting. We found ourselves on tour always talking about Metallica, always making fun of Metallica, and we were like, ‘Yep, St. Anger was like a really funny thing that happened, let’s just call our album that and then that’ll be funny.”

If you’ve seen Private Function’s rendition of the cover, with the iconic fist becoming a thumbs up in shackles, you’ll see the humour clearly instigated before seeing the tracklisting.

Which brings us to one of the tracks, White Lady Funerals, to which Hanson continues;

I think our songs are very literal a lot of the time. We don’t really have a lot of metaphors or social critiques.
[ Joe Hanson ]

“I’m not sure if it’s in other cities but it’s definitely in Melbourne, there’s this funeral home called White Lady Funerals that’s kind of everywhere. It’s probably like the most popular one and you’d always see it growing up and we were just kind of thinking that’s kind of a really weird name and concept. The ads were on T.V. and it was this weird cultish vibe and we thought it was a funny name so like, ‘Alright, let’s just make a song called that,’ so we just thought of the name and we wrote the song and when it came to the lyrics, we were like, ‘Well, this thing is weird and strange enough as it is. Let’s just write a straight-up jingle. Not even sing about it or analyse it, just say what it is and what it does. I think our songs are very literal a lot of the time. We don’t really have a lot of metaphors or social critiques.”

When noting the lyrical themes within this record, Hanson explains: “I think a lot of our philosophy here is that there is humour in the deeper psychological levels of living. I think that if you can’t look at the darkest depths of your psyche and find humour in it, then … then I don’t know. I think that’s just inherent in human nature and social nature. We’re not trying to make any sort of particular type of statement or whatever but that’s just how we kind of approach lyrics and how we approach our philosophy towards what we’re doing.”

Their performances seem to follow similarly, as we dive into the fuel behind their gigs, Hanson sites that “We’re all big music fans. When we’re not playing gigs, we’ll be at other gigs, seeing other bands and stuff and we’ve been doing that for all of our lives basically, so, when it came to us putting a band together, we were like ‘well, you know, we go to gigs all the time. What do we like to see? What do we want? How do we wanna do things a bit differently?’ And I think we kind of empathised with a lot of other people that go and see bands all the time and there’s a lot of, not to name names or anything, but a lot of bands are kinda doing the same thing, following the same trends, and whatnot, so we were like; ‘let’s take this to the max and give 100% at every performance.”

With their tour kicking off later this month, it’s a prime opportunity to learn of any tricks up the band’s sleeves, but it’s all quite improvised when they’re on stage.

“A lot of times with our performances, we don’t really plan anything specific, we just figure out what set we’re gonna do and kind of let the crowd and the vibe and everything just carry it from there so there’s not really much thought to it, we just sort of do our thing and let it flow as it should.”

To avoid missing out on seeing their stage antics live, getcha self a ticket to one of the shows on their upcoming St. Anger tour: