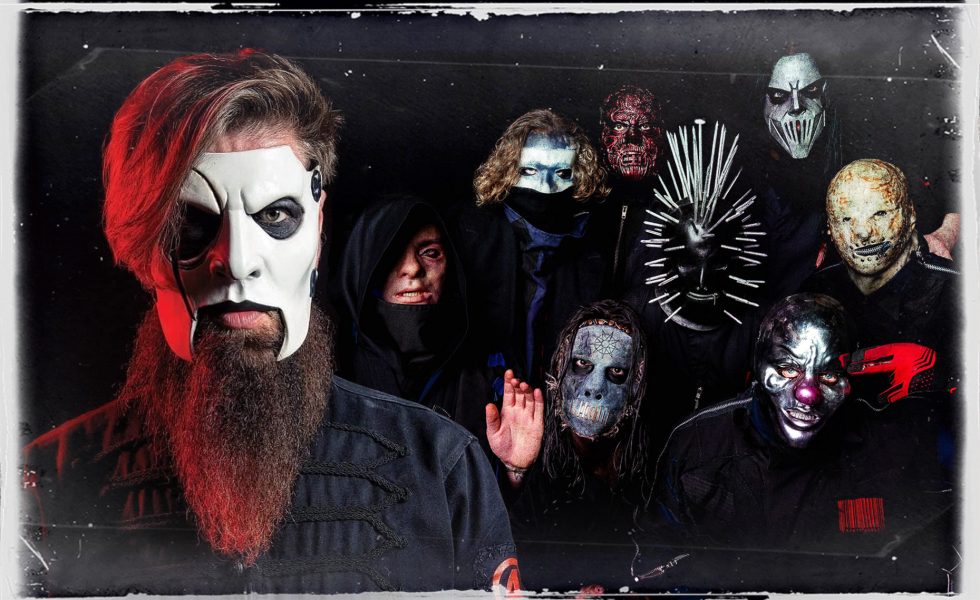 SLIPKNOT // A Step Further Into Hell

A little bit of mystery is good for us. As the boiler-suited guitarist for nu-metal superstars Slipknot, mystery is his business and business has never been better.

Releasing their fifth studio album We Are Not Your Kind today, 9th August, it’s hard to resist the notion these twisted beings comprising Slipknot have made it into the pantheon of metal greats—Priest, Maiden … Slipknot? For some of us, it doesn’t quite mesh. For millions of maggots worldwide, it’s unquestionable truth. Even so, getting high off your own hype is for Kanye; after two decades in the business, #4 of the nine still sees more mountain to climb. This coming from a co-curator of a worldwide festival (Knotfest), a co-seller of 30 million records, and helping keeping a band together despite the death of a brother in Paul Gray. It’s been dark, at times. But Slipknot is all about the darker side of human nature. Keeping that psychotic mask on would see it fuse into one’s skin in time; the ‘crazy’ brooding like a feral animal and tearing one’s sanity into shreds. Thankfully, Jim Root has kept his head above it all. Hasn’t he?

Hysteria: Let’s talk about the new album, We Are Not Your Kind. You’ve said that this is a full album experience. You want to take the listener on a journey from start to finish. Why an album in the Spotify era, so to speak?

Jim: I mean, it’s kind of like what we know. I mean, you know, we’re from a different generation where that’s what you got were albums and that’s how we put music together. I suppose we could just go on every few months releasing one single but it’s not really what we do, at least not right now. I like to do full albums. I don’t know. I really enjoy working in studios. You know what I mean? It’s like if I could spend more time in the studio, I would. I don’t know, I just kind of like where we’re at now. We got to figure out. How many times am I going to say “you know,” you know?

I don’t know, you know? It’s just one of those things, you know?

We’re at a crossroads now. We’re at a point in time where we’re trying to figure out what to do. And I think in a lot of ways it’s kind of like the wild west out there. You can do a full record or you could do a song if you want. I think that’s a little bit more what the pop world does. I think still have fans who want to have an experience and I think it would be a shame the day when the full length LP disappears entirely. I think that would be a sad day. It’s already sad enough that all the studios are disappearing like Abbey Road. All these legendary places.

So slowly and surely rock is really and metal is really … well, I wouldn’t say it’s dying. It’s probably bigger than it’s ever been. But the way people consume it, it’s definitely changing for sure.

I did some maths, which is rare for me. Your debut album (self-titled) was 17 years away from Iron Maiden’s The Number of the Beast … this album is 20 years older than your debut record. Some would say that amount of time in the industry gives you legendary status. Do you feel that? Do you feel you’ve “made it?”

I don’t know if I’ll ever feel like that. You know it’s so hard being involved with the band and being a part of it for so long, it’s really hard to wrap your brain around. I can’t look at anything objectively. It’s like watching your hair grow. You know what I mean? You don’t notice how long but when a friend of yours sees you after not seeing you for a year, he’s like, “Holy shit. Your hair got long.” You know, type of thing. It’s hard for me to gauge that. I still feel like there’s goals to reach, and a lot of things to do. Maybe we’ve done them already. I don’t know. Maybe when I start feeling complacent and lose all humility and feel like “Oh that’s it, I’ve made the best music I’m ever going to make. It’s all down hill from here. That’s where it all goes to shit.” I don’t know. I still feel like there’s something to achieve, you know?

Slipknot as a unit have always been about horror and psychological trauma. How do you tap into that dark side of yourselves so consistently and so deeply?

I’ve always thought humans by nature, for the most part, have this tendency to lean towards the dark rather than the light. Even if there’s a light at the end of the tunnel, there’s just something that’s romantic, or maybe provocative about darkness and depression. And a lot of people feel that. For me personally, if I’m feeling depressed, instead of listening to a happy song, I’ll put on something really miserable. It’s kind of a weird thing for a human to do.

You’d think you’d want the opposite, something to lift you up but for me too also, the type of music that I listen to, I like to listen to really dissonant, ambient, minor. That’s just personally where my head goes and where my soul goes. And I think just by nature, that just kind of comes through in the music even though I tend to use a lot of major scales and writing and things like that. It’s weird because that’s just kind of where my heads at. And when I listen to older music like a lot of the stuff I listen to, I tend to like a lot of songs of hope that are made from despair, I suppose.

What kind of bands are those?

I listen to a lot of Pink Floyd, and Jethro Tull, and, Yes and shit like that. I always listen to some of the older Radiohead like OK Computer and Amnesiac. Things like that. I just like dark, ambient, Portishead, stuff like that. I can’t think of anything specifically right now. Even a song by Yes like Long Distance Runaround. It’s a pretty upbeat song but if you listen to the lyric or content, it’s kind of a little bit dark.

Radiohead I think said they made “happy music for depressed people.” [Pedant alert: I now know they didn’t, shut up.] It’s a weird conundrum.

Yeah kind of. But I like that and I’ve always liked that juxtaposition … and some kind of indie or pop bands do it where you’ll have this really like dippity, uppity, catchy tune yet their singing about something extremely dark. I’ve always like that kind of like oxymoron of it.

I’ve always thought humans by nature, for the most part, have this tendency to lean towards the dark rather than the light. Even if there’s a light at the end of the tunnel, there’s just something that’s romantic, or maybe provocative about darkness and depression. And a lot of people feel that.
[JIM]

As for the album … On Spiders, I heard a bit of John Carpenter in there. Bit of old school on Orphan. Are you guys consciously marinating in the horror stuff or does it just sort of seep into it until people like me point it out?

[laughs] I think the way it comes out … I think that’s just part of the way when we collaborate at the end of the day that’s what we end up with what we have. Because we never talk about anything like that when we’re making this music. Like when we were making Spiders, the biggest reference you were talking about would be like an Asian-ish and blues type guitar solo. So we talk about thing likes that. But like the horror type of thing, I’m not a huge horror buff. Corey is, but when it comes to writing a lot of the music, Corey wasn’t usually involved in that. Lyrics and vocals, of course yeah 100%. Maybe that’s kind of just inbred into us and a lot of the simple modular stuff the clown, works with that part of our sound I guess. I don’t know. That’s weird.

Either you or Corey said this record was much more collaborative—you don’t have nine dudes in the studio at once, do you?

We’re never really all there at the same time. But the most people, who were there at one time, was when we were tracking the songs with Jay or we were tracking the beat of the songs. It was me, Alex [bass], Jay [drums], and Mick [guitars] in the studio tracking, playing as a band. And then after that, it was just guitar over dubs, bass over dubs, drums, percussion, you know. Sid [DJ], Craig [keys]. Clown [percussion] stuff. Then vocals. There were times when a lot of us were just all there hanging around but it’s too hard to get all of us in one place at one time.

The physical aspect must be another factor, not having to tour in more than one band. The stage show you guys put on must be intense on the body. Do you feel you can keep up that level of physicality?

I don’t know. I wonder about that every night when I go out on stage, especially after just having a few years off, which I’ve never had in our 20 year career. I’ve never been home for more than three or four months. Being at home and working on a record and writing blurbs and all of a sudden being back to touring. It’s a little bit of an eye opener. It’s like oh, shit. I’m not 26 any more. This kind of hurts now. So I don’t know, man. I mean I suppose I guess time marching on will only be the one to tell. If it gets to the point where I can’t function on stage then maybe it’s time to pack it in, you know?

The next massive show you’ll have Down Under is with Metallica. Insane. What’s the feeling when you get news you’re playing alongside Metallica?

It’s going to be fun, man. It’s going to be interesting. I mean, we’ve only done one proper tour with Metallica years and years ago. Obviously we’re acquaintances and maybe a little bit more in some ways like friends. Not like friends that hang out every day but when we see each other, we’re friendly. We can rap, we can talk, we can hang out, we can level with each other. That type of thing. So, it’s cool, man. And if it weren’t for Metallica, I wouldn’t be playing music the way I play it. I mean face it, they were very influential in the shaping of music, guitar player and a song-writer a little bit. And the fact that they’re still doing it, I guess that gives hope to tip of the hat to the previous thing that we were just talking about. How long can you do it? Can we do it as long as The Rolling Stones? I doubt it. Can we do it as long as Metallica? Maybe, I hope so. We’ll see.

We Are Not Your Kind is available to purchase and stream now here.

Catch Slipknot playing with Metallica at the following dates: