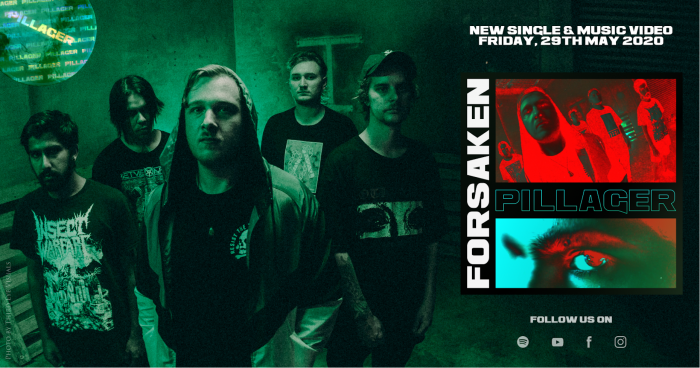 Western Sydney deathcore/downtempo act Pillager are bringing back their crushing sound, with the release of their new track Forsaken and a trippy new music video to go with it.

The first release off the band’s new EP Forsaken Nation, Pillager have followed up from their 2019 single Emissary with another mosh-worthy track on Forsaken. Belting out some savage growls and brutal blast beats to an eerie, atmospheric backdrop, the song sucks you in and spits you back out like any good heavy track should.

“The single is a stepping stone for the band branching out into a sound we haven’t experimented much with but all love.” the band said about the track.

And if you thought the song was heavy, the colourful trip of a video to go with it is just as aggressive. The new videos showcase the band’s harsh sound with a rave’s worth of bright lights and some signature distorted visuals fitting for any deathcore band, thanks to the team at Third Eye Visuals.

Forsaken Nation will be the first non-single release by the Sydney act since their 2016 debut EP Cut Throat. If Forsaken is any indicator, like Emissary, Pillager have only improved upon their sound, trading the slightly rougher mixing of Cut Throat for a well-polished, heavy-as-hell record.

“During this pandemic it makes it difficult to say when we’ll even be able to be on a stage again when it comes to the foreseeable future, but that being said we’ve entered a new decade and this single is Pillager’s first step into it. I hope people can see and feel all of our blood, sweat & financial hardships we’ve put ourselves through to get this done despite hitting a series of roadblocks and batshit crazy events.”

One thing’s for sure, Pillager are ready to hit 2020 hard.