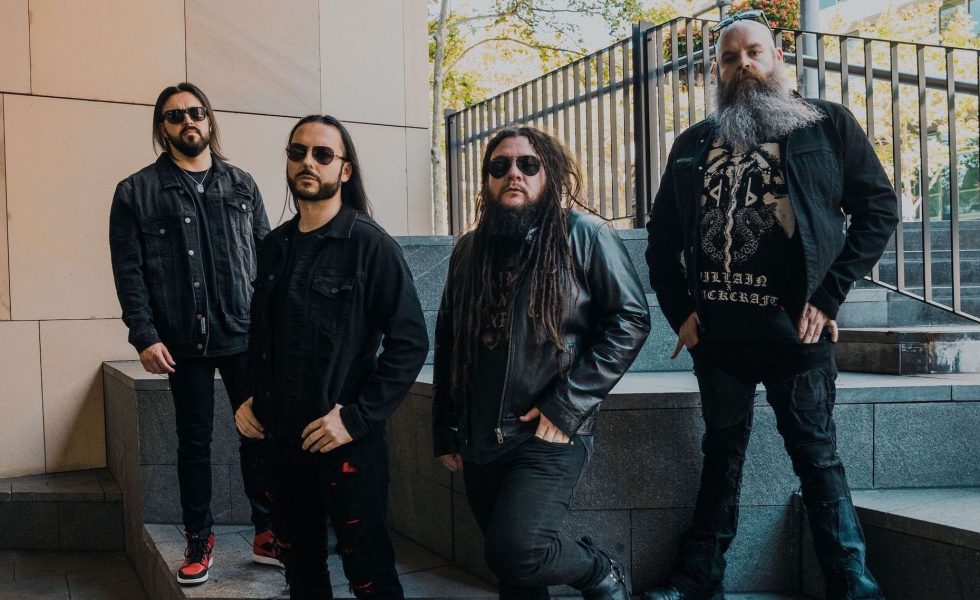 Industrial metal titans, Our Last Enemy, made it their mission to save 2020 with a stack of new singles, and they’ve kept this momentum going with their latest heavy-hitter, Long Time Coming.

Both intensely personal and catchy, the track will feature on their upcoming EP, As Above, So Below. We wanted the lowdown on the track and the band’s plans for the year, so we caught up with frontman Oli Fogwell. Buckle up: it’s set to be a big one.

The current line-up has been around for the last couple of years, but we’ve all known each other through music for the last decade. We’ve managed to snag some pretty cool things in that time, like dropping a sneaky cover of The Progidy’s Spitfire and touring the country a few times off the back of it. We were also able to open for bands like Combichrist, Perturbator and Pain. And we dropped two singles last year—right as a global pandemic hit!

You’ve barely taken a breath since coming back from hiatus. Was that time off important for you all to reassess things?

We all took some time to write the best album we could. It was never meant to be that long. As a lot of the record speaks to, we had some internal and external struggles and setbacks. In a way, it all added to the process.

How did Long Time Coming come together?

It was one of the first songs we wrote when we began our new EP. It really set some of the goalposts for how far out of our comfort zone we’d go. We knew we wanted to explore more varied soundscapes while maintaining our core sound, and this track seemed to represent that the most for us. We worked at a few studios, namely The Brain in Sydney with the master Clayton Segelov who did vocals, and our guitarist’s studio, Icon of Sin, in Brisbane. DW Norton (Superheist) came in and wrapped it all with a huge mix to really take it to the next level.

As soon as you hit play on this record, you will start a pit!
[ Oli Fogwell ]

Going back to your earlier point, what were those struggles and setbacks you experienced and how did you overcome them?

We all dealt with various personal issues and some of them resulted in line up changes mid-process. It wasn’t all doom and gloom though, our drummer had to leave just as we were to begin the final recording to start a family, but he’s back now and still thrashing! John Sankey ended up tracking drums for us. He’s played with some of our favourite bands like Fear Factory, Divine Heresy, Devolved and Superheist.

Tell us about the upcoming EP, As Above, So Below. Can we expect to see even more industrial metal?

It certainly still is that heavy, industrial sound we are known for but, like the new single, it demonstrates more varied moods and textures. Not that we haven’t touched on these styles before, now they just feel more fully formed. Don’t get me wrong – as soon as you hit play on this record, you will start a pit!

Tell us about your signing to Octane Records.

It’s great to have someone in our corner. We really wanted to have a team behind us that believed in the EP as much as we do. We put a lot into it. We want as many people as possible to have a chance to hear it. We are especially looking forward to everyone seeing the awesome pre-order bundles—they look great! While the music will be everywhere digitally, there’s something about holding a tangible product that still excites us.

As Above, So Below will drop in May, but there’ll be a little surprise before that! We are expecting to tour again this year, but we’re cautious with what we lock-in. We had to postpone/cancel so many times. We don’t want to announce anything until we know it’s rock solid.