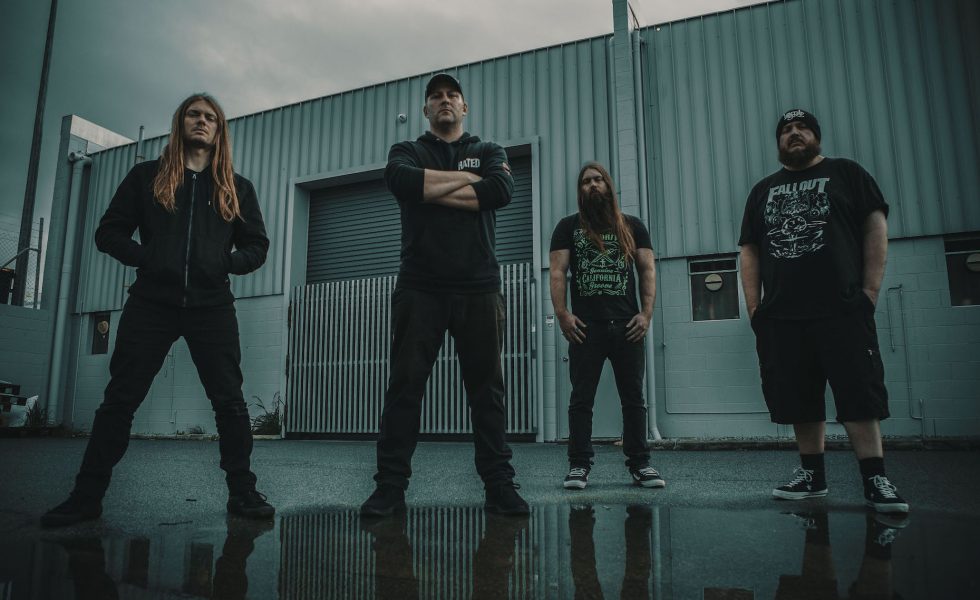 Circle the Prey is their first full length album, but with three EPs already to their name and a history going back just over a decade, they are hardly Johnny-Come-Latelys, as we learned when we got on the phone with vocalist Josh Kelly. Hysteria was lucky enough to score the bands premiere of new single Hell Is Coming.

How are things going over there? All we seem to hear about here is the east coast at the moment, so how are things where you are?

It’s all pretty normal over here. There’s no issues or drama, so it’s all great.

So does that mean you can play shows, rehearse, get together and everything?

Yeah, we can actually go to the pub and have a beer and have a bit more of a social life, so it’s pretty good.

Things have never really stopped over in WA, is that right?

No, it hasn’t been so bad. We’ve had a couple of intermittent lockdowns and things like that but nothing like what’s been going on over east, which really sucks over there.

It’s been impossible to plan anything because we never know what’s around the corner here.

Yeah, well that’s where we were with planning a tour, and then we were like, “When can we do it?”

You wouldn’t really want to do that right  now, with Perth being one of the most expensive places to travel from. You might want to wait a bit longer now, even with the album out.

Let’s move on to talking a little bit about the band itself now as for people who aren’t from WA, Kimura is probably going to be something of a new band. Can you give us a little history lesson?

So Kimura was founded in 2010 by our drummer Gordo (Steinburger) and we’ve had a number of line-up changes over the years, as all bands do. The first release came out in 2014, the second one was 2016 and then the third, which was the first one that I was on came out in 2018. So they’ve been around for a while before I joined, and they’ve played all over WA, even regional places like Geraldton and Kalgoorlie.

So the band has definitely been around for a long time, really, and you’ve already done a lot of miles if you’re been doing regional touring in WA. That’s a big state to travel around.

Yeah, that’s exactly right, and we love playing over here. The scene here is amazing, but we’re itching to get out of WA. We want to get our music out there everywhere as much as we can from a live perspective. It’s great that we’ve got social media and online to get the music out there, but we want to play some shows over east. We’d love to get overseas one day too, if we could.

It seemed like a few years ago every band from Perth was heading to Indonesia for shows because it was closer than coming over here.

Circle the Prey is the fourth release for Kimura, right?

Correct. Fourth release, and the first full length album for us so we’ve pretty stoked.

I’m really lucky that I get to go through that process. A creative, organic process with the guys in the band, because they’re incredible musicians and we all just bounce and flow really well when we’re writing.
[ Josh Kelly ]

When did it come together, and how long did it take to get it all up and going?

Well, about 18 months ago we got together and had a bit of a chat then—or maybe a bit sooner than that—but our bass player left at the time. So we had a bit of a chat and we thought, you know, “What do we want to do now?” Like, what do we want to achieve? And we basically just put a plan in place and said, “It’s about time we do an album. We’ve been around long enough!” We all wanted to do it, and we had an amount of backlog with riffs and songs and structures that our guitarist had sitting there, and ideas we all had. So we just recorded an album.

It must be good to finally get an album out. EPs are great but when it comes to metal, fans seem to expect full length albums than to be drip-fed EPs after a while.

I completely agree. I mean, we’re sort of at that point where, you know, we’ve done the EP thing and it’s great. It’s great to get new music out, but we thought we must surely be at a point now for us personally where we’ve got to get all this material out. Let’s just, you know, heads down, shut up, get it done!

You’ve obviously taken the plunge now, so the next step must be to get it out nationally. Kimura can’t really tour anywhere at the moment, but what is your plan for when things open up? To come east and play shows over this way?

Yeah, that’s the next step for us, definitely. We’d love to do a full east coast tour and hit Brisbane, Sydney, Newcastle, Melbourne, Canberra, Adelaide, and do it properly. Do a real good tour around and play with some other really great bands because there’s so many good bands over there too that I listen to that we just think, “Fuck it, it would be awesome to tour with them.” And get overseas too after that if we can, or whichever comes first!

You have already done quite a lot of touring in WA. What is it like to tour there? Is there a lot of places you’re able to play?

There’s a lot of good venues in terms of the sort of numbers and crowds that you pull. It can be hit and miss because a lot of it is determined by lifestyle, work, how remote it is, when it is … playing out at places that are a bit more remote than just around Perth. If you go to the goldfields, out to Kalgoorlie, north to Geraldton. Those places you can get some really good numbers sometimes, and other times not so much.

What sort of bigger shows have you managed to play since you’ve been in the band?

Since I’ve been in Kimura we’ve played a couple of really good ones. We played a hell of a Halloween show at the Civic in Perth, which was a really wicked show. Really good crowd and some really good bands playing that. We played Slayfest which was at this big outdoor venue in Fremantle. It’s probably one of the best crowds we’ve ever played to, really good numbers and just a whole slab of killer bands played across a couple of stages. So that was a wicked festival. We headlined a show at a place called The Racket a few weeks ago, and that was kind of like a Gothic club type thing that they do, with cages on stage that people dance in and they’ve got action in between the band where they’ve got people getting tied up and that sort of stuff. That was pretty insane.

If you had to pick some songs off the album as highlights, songs we should really check out, what would they be?

Oh, that’s a really tough one. They’re all personal, very much based on real life experiences, whether it’s reflective or it’s introverted or extroverted. So I guess for me it would be the first track off the album, Cliff and Step. That was a really strong message that I sent to myself. I more or less wrote that in the third person when I was in a fairly average headspace and it was basically along the lines of, you know, stop being a sook and thinking of the world so hard – face the cliff and take the step. Jump off and fucking fly!

What about the usual songwriting process for Kimura? How does that work?

The usual process is that lyrically, that’s predominantly my area, so all the lyrics are pretty much written by myself. There were a couple of tracks that I really wanted to get a perspective on, a couple of topics from Gordo and Ian (McAllister – guitars), so they wrote a couple of things and sent them to me and kind of incorporated it into a song. So that was cool. But the actual writing process… our guitarist just comes up with a million different riffs every time! It’s ridiculous! So he comes up with the ideas and concepts. Whether it could be a verse or chorus or bridge of just something really cool and then we just let it happen really organically and capture that idea.

Do you feel like it’s your job to come up with the lyrics?

It’s something I’ve always done, to be honest. I’ve always written lyrics in previous bands that I was in, even back when I was living in Brisbane. This album we’ve done, the lyrics were actually written before the music. All the songs, even most of the titles, I wrote probably anywhere from 6 to 12 months before the songs came about musically. So sometimes I draw on old stuff that I’ve written, sometimes new stuff. But it’s something that’s really close to me and I really enjoy it when we put together something musically. There’s a track on the album I wrote the lyrics for 15 years ago. I’m really lucky that I get to go through that process. A creative, organic process with the guys in the band, because they’re incredible musicians and we all just bounce and flow really well when we’re writing.

You must feel very lucky that you’ve been able to keep playing and working, even if it’s just in your own backyard for the moment.

Yeah, that’s a huge thing. We all really feel for the bands, the entertainment industry, the scene, especially on the east coast. I mean, it’s everywhere, but especially over there. People losing income, or not being able to be creative and have that catharsis the people enjoy through doing music on a local scene. It would fucking suck, because we’ve had a couple a little lockdowns over here and I think we had one show cancelled because of that. But every week, for months on end, how do you stay motivated to play music?