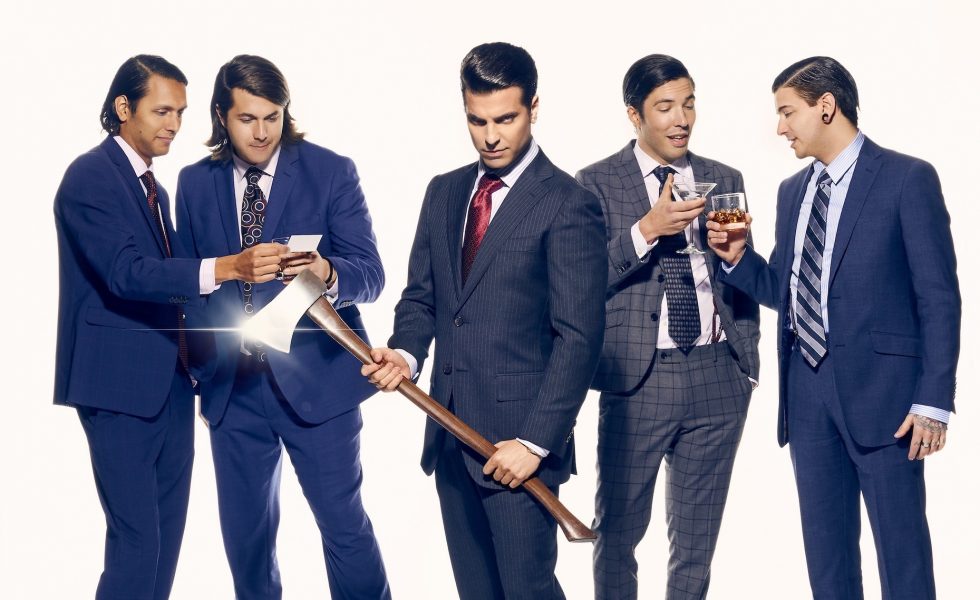 Oct 18, 2021 / WORDS Alex Callan / PHOTOS @fscottschafer / The slashercore's fifth LP pushes so many boundaries that even Huey Lewis has a songwriting credit on it.

Ice Nine Kills are a hard sell to most metalheads. When they first appeared in 2000 marketed as a ‘slashercore’ act whose schtick was to write horror inspired lyrics, whilst dressed as iconic horror characters, some felt the group were simply trying to cash in on the ‘newly’ commercial appeal of Slipknot and Insane Clown Posse.

But as MTV’s mid-2000’s coverage changed and pop-punk, emo, and metalcore all became the most commercially viable form of heavy music, Ice Nine Kills stayed true. Now over two decades later their work has not only continued to embrace horror tropes, but completely reimagined it. Honing their style to the point of writing their own ‘horror-film’ concept albums, INK have now established themselves as one of the most innovative metal acts around, evidenced by their ever-growing fanbase.

Considering the groups’ last effort The Silver Scream saw their popularity skyrocket, The Silver Scream 2: Welcome To Horrorwood is anticipated to be the bands most successful release. Quite an uncommon feat for a band on their sixth album.

“I think it’s unusual,” reflects the groups frontman Spencer Charnas, “it’s a topic that has come up a lot. I think it’s one of those things where we just never gave up the dream of making this band a reality and kept plugging along and eventually our vision caught up with the audience.”

With the group tackling a ‘real-world’ setting on Welcome To Horrorwood, Charnas discussed how public interest has gradually shifted to more sinister tales of true crime.

“I think it’s one of those things that was a perfect storm. Our song writing was getting better at the same time ‘true crime’ podcasts and documentaries have been flooding the marketplace. People are obsessed with that stuff. At the same time, I feel horror has continued to get bigger and bigger.”

I think it’s one of those things where we just never gave up the dream of making this band a reality and kept plugging along and eventually our vision caught up with the audience.
[ Spencer Charnas ]

“Every once in a while, there is an iconic horror milestone that comes along and reignites interest in the genre. It had a bit of a resurgence 5-10 years ago similarly to how it happened in the 80’s with Slashers and in the 90’s with Scream and then Saw in the early 2000’s. Even in the last few years we have seen remakes of IT; we saw Get Out and the sequel to Halloween all crossing over into these massive mainstream hits.”

“It just happened to be around the same time that we were going full force with the horror thing.”

With the group not only adopting the genre’s imagery but also incorporating a variety of samples; interludes and cinema references into their music, it raises the question of if they have ever been subject to a copyright lawsuit. In particular, one of the group’s newest singles Hip To Be Scared, which as you might imagine, incorporates moments from both the original Huey Lewis song and an iconic American Psycho scene.

“When I was writing that I intentionally made it slightly different in terms of the chords, but it was still close enough that we had to approach Huey Lewis and he had to sign off on that. So technically, Hip To Be Scared is part-written by Huey Lewis,” he laughs.

“From what I heard he liked the song. We were all really excited about that.”

The Silver Scream 2: Welcome To Horrorwood is released on October 15 and if Charnas’ wants to warn you of anything, it is that “based on the first three singles, I don’t think you know what you’re in store for.”

Although, it is technically a sequel, meaning anyone who has seen Scream 2 can slightly guess what’s in store.

“Of course! Always think back to what Randy said, ‘the body count is always bigger, the budget is bigger; it’s carnage candy’.”