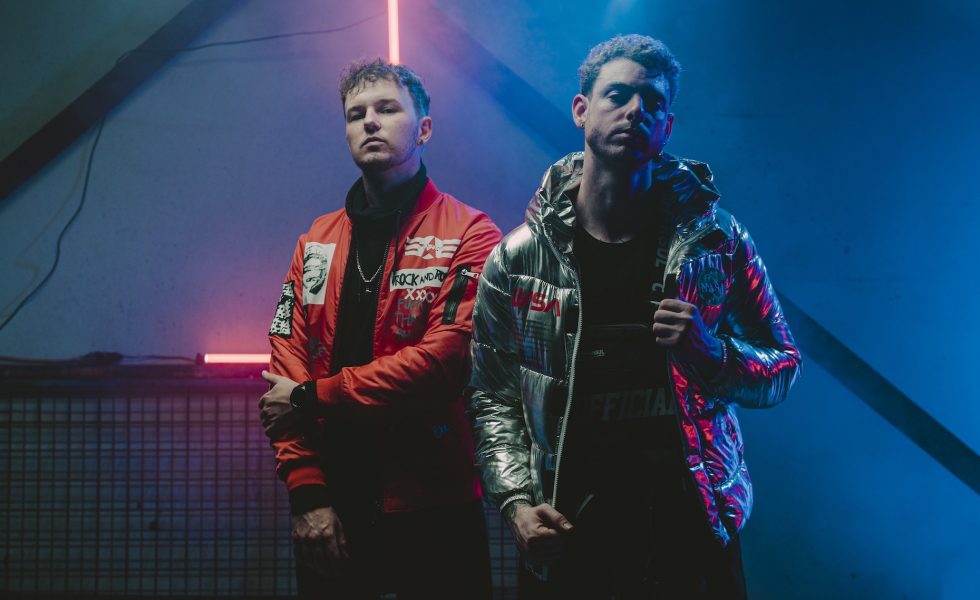 Meet East Capri: the Brisbane duo who’ll have you singing your lungs out with their debut single, Wake n Repeat.

It premiered on Triple M’s Hard N Heavy on Tuesday night, and we’ve been clamouring for more ever since. Luckily for us, the band’s given Hysteria a super-exclusive view of its music video. We got Jackson Deasy (guitarist) and Eden Cartwright (vocals) to give us the lowdown on it, as well as the track itself and their plans for their upcoming EP.

Jackson: It started a fair while ago. Eden and I are originally from Rockhampton. We met through a mutual friend and got started in another band that didn’t really go anywhere. From there, we continued to write songs together. We decided to do something with them.

Eden: Yeah, we’ve been writing together for years. We’ve sat on our upcoming songs for so long. We both went through this big, dark period in our lives, and through writing about it, our bond grew.

It’s great to hear that creating music got you through that dark period.

Eden: Yeah. I lost my mum a few years back, and we wrote a song about that. And I know Jackson went through a big period of isolation. A lot of that inspired Wake n Repeat. It’s been a bit of a healing process for us.

The topic of being isolated from the outside world feels super fitting in these current times. But did lockdown and the pandemic inspire Wake n Repeat?

Jackson: Actually, no. I wrote the track before the pandemic. When I moved to Brisbane from Rockhampton, I was living by myself for a year. I didn’t really know many people, and I had a bit of trouble finding a job. So being in a new place where I was by myself for a while was a struggle for me. That’s mostly what the track is about.

Eden: I think it’s really cool that you can interpret the track in your own way though.

Jackson: It still relates to COVID times for many people, but the concept was created a fair while before that.

There’s a vicious cycle that comes into play there, you’re too depressed to get out of bed, but then you feel guilty about not having accomplished anything with your day. It’s just wake and repeat. You get up and miss out on the world because of your fears and depression.
[ Eden Cartwright, East Capri ]

Tell us some standout moments from the recording process.

Jackson: If we think back to the recording process of our upcoming EP, it was pretty emotional. With the song Depart, Eden shouts all these questions relating to why someone cut their life short. We had to stop recording for a bit to work through all of that. It was a pretty big moment. So we kept some of that stuff on the song.

Eden: Jackson pushed me to get the most out of my vocals, especially with getting that emotion out there and giving the best performance possible to make things believable. I’m so proud of it.

We love the darker visuals of the music video. How’d putting it together go?

Jackson: Eden and I came up with the concept together. The imagery relates to the inside of your mind. The TVs are little pockets of thought. I am playing a character that is Eden’s bad thoughts. I’m kind of evil, with the blacked-out eyes and whispering things in his ear.

Eden: Especially with the swing set. If you break that down, I’m docile, and Jackson is controlling me, pushing me into darkness. With the couch scene, there’s the contrast between me laughing hysterically and getting slammed back down. Then there’s this metaphor about being stuck in bed every day and not wanting to get out just due to fear and procrastination. There’s a vicious cycle that comes into play there, you’re too depressed to get out of bed, but then you feel guilty about not having accomplished anything with your day. It’s just wake and repeat. You get up and miss out on the world because of your fears and depression.

Jackson: A lot of the imagery relates to your own mind holding you back.

Who are some of the band’s biggest inspirations?

Jackson: We have a few, but Wake n Repeat in particular was influenced by Heathens era Twenty One Pilots and Bring Me The Horizon.

Eden: A few of our friends have said if Bring Me The Horizon and Heathens era Twenty One Pilots had a baby, it’d be this song.

Jackson: As for the rest of the EP and our future music, we’ve been heavily influenced by Slaves, I Prevail, Falling In Reverse, Linkin Park and Palisades.

Can you give us any more details of your upcoming EP?

Jackson: We have another single dropping soon. It’s a lot heavier than Wake n Repeat. It’s one of the only ones on the EP with screamed vocals in it.

Eden: We think it’ll be a bit more familiar to an Australian audience.

Jackson: There’s a lot of power behind it. It could be one of our bigger songs. And then, as far as lyrical content, there are many tracks on the EP about both battling yourself and losing some battles. We also touch on how you might deal with loss and whether or not it’s damaging.

Eden: A lot of these songs are a product of what we’ve been through. If all these horrible things hadn’t happened, these songs would never have seen the light of day. I feel like that’s the only way I’ve ever been able to write music or lyrics. When you feel a certain way, and you want to write, that influences what comes out. That’s really noticeable in our tracks that’ll follow the EP. The vibe has changed, like our situation in life has.

FOR FANS OF: Bring Me The Horizon, Twenty One Pilots, Slaves