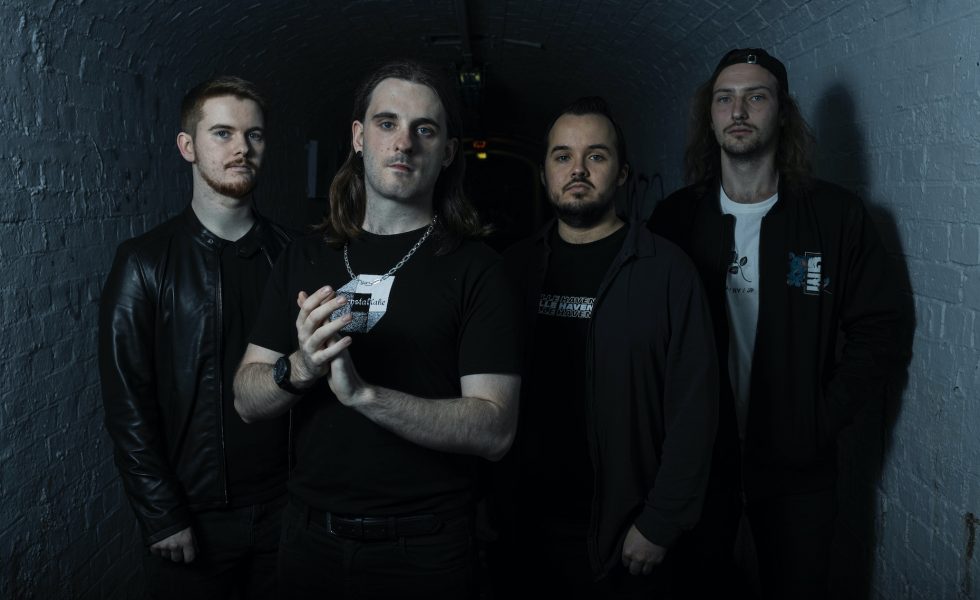 Amongst the brutality of Australia’s heavy scene lies Broken Earth.

In their short time together, the Sydneysiders have turned heads and snapped necks, and they’re set to keep this up with their latest piledriver, Somniphobia. We caught up with frontman Raph Smith to chat about how it came together and the band’s plans for the rest of the year. 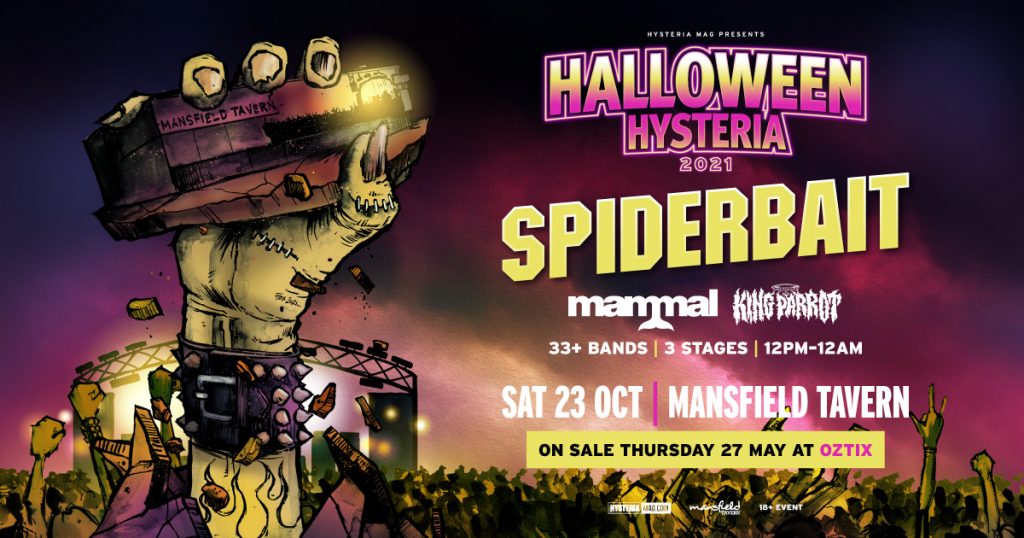 Raph: Broken Earth was created at the start of 2019 following the dissolution of a previous band. We put out a pretty terrible demo as our first song, and then we partnered with our producer, Christopher Vernon, to do another four. That was in July 2019. After that, we went on a bit of a rebrand and put out our first actual single, Dance in the Dark, last year.

We had a lineup change after that. We are now a four-piece consisting of me (vocals), Ben Robinson (guitarist/ backing screamed vocals), Daniel Trott (guitarist) and Sebastian Weir (drums). Seb’s officially been in the band for two weeks, but he’s been helping us out behind the scenes for the past year. We’ve developed our sound, and we feel it’s a unique blend of heavy groove and aggressive melodic hooks. But, at the end of the day, we’re all just mates. We grew up together and played in different bands as teenagers, and we’ve realised we’re serious about this music thing.

Tell us about how the new single, Somniphobia, came together.

We had booked in time with Chris two months before we were due to head into the studio. At the time, we only had two songs. So we had to create two others. The first one, Dance in the Dark, came about quite easily, but Somniphobia was challenging. As the primary writer, I was struggling to bring forward a new idea that everyone would like. The instrumentals were a bunch of different ideas mashed together on my guitar. Daniel thought it sounded sick, so we had that but no lyrics to put with it.

Then another night, Ben and I were catching up, and he wanted to hear the song before I showed the band. We were talking about writer’s block. I find writing instrumentation really easy but lyrics difficult, really ironic as a vocalist. At the time, I’d just moved out of home, and I was going through sleep paralysis almost every night. I would have anxiety about going to sleep. I’d fear sleep demons or hallucinate sounds; images would come from lights flickering off my mirrors – all these warped things. Ben told me he’d experienced that for years, so we decided to write about it.  We wrote the lyrics in one night, and I think barely any of them got changed in the studio.  The lyrics and instrumentals were constructed fairly quickly. It came together so organically.

Talking about something so real, exposing yourself and putting that out there as a main single is terrifying. I’m still terrified to this day in some ways.
[ Raph Smith, Broken Earth ]

At the time, I wasn’t used to being vulnerable in my lyrics. I’ve struggled with that in life. Talking about something so real, exposing yourself and putting that out there as a main single is terrifying. I’m still terrified to this day in some ways. Ben is the same too. We’re nervous, but we’re proud that we’ve been vulnerable and put it out there.

When we were putting this song together, I didn’t know how to sing. I was just the bands’ screamer. We recorded the vocals with our new vocalist last year, but he pulled out halfway through due to mental health. We supported it 100%, but it left us in a difficult position. We’d gone through multiple lineup changes in six months, and that period of uncertainty almost did end with us breaking up. But I ended up deciding to just learn how to sing. Everyone, myself included, was unsure about it (laughs). The guys said, “we’ve heard you sing before, and you’re a bit sketchy.” I gave it a shot anyway, and I absolutely sucked. I sucked for like a month. I’d blow my voice out. I’d think I’d hit a pitch, but it’d turn out to be flat, or I’d be shaking all over the place.

I got lessons from a few different people. Our vocal producer Liam McDonald (Infinite Illusion), was one of them. He also helped us re-record the track because we couldn’t do it in Melbourne when we were in lockdown in Sydney. He got me started on the right track and got me in touch with a few people. It got to the point in November last year that we decided to give me a shot with Somniphobia. On that day, I recorded my clean vocals and re-recorded my screams. They had improved significantly. Since then, we just had to wait for things to come through with Chris in Melbourne. So it’s been a song two years in the making- a slow burn of a creative process, really different to what we’re used to.

You’ve talked about feeling like this single is significantly better than some of your older stuff. So what did you do differently to help achieve that?

We stopped doing half measures. We stopped having the attitude that something was good enough. Instead, we started analysing what was going on and the songs sound, and we made our next decisions based on that. We will now scrap entire songs if we’re not happy with them, or we’ll take the best elements and redo them. We’ve written three songs in the past year and a half. We’ve just kept finding ways to improve them, and now we’re at a point where we’re really proud.

With Somniphobia, we stopped trying to please everyone. We think we did that on Dance in the Dark. We were trying to please the Triple J crowd with the chorus, the Northlane junkies by having a proggy lead and the 2010 core kids by putting in a drop-c breakdown. It was a very safe song, but Somniphobia is the opposite. It goes in a lot of different directions. It’s a bit unexpected. We thought about the story we were telling, and we tried to match what the lyrics and music were saying. We feel like we’ve creatively pushed ourselves instead of just emulating artists bigger than us. This feels like a true reflection of who we are as artists. We’ve embraced what we really want to say and sound like.

With all that in mind, who would you say are some of the band’s biggest influences?

Our influences are always changing. We love seeing progression in music and artists that are pushing the envelope. One of the classic artists that we all go back to is Linkin Park. Whenever I write a chorus, I think of them. Their first two albums were so good at basing a song around a kicking chorus and making the rest awesome off the back of that. I think they were one of the first metal bands to do that right. You can see their influence in everything. Bring Me The Horizon is another one. The way they constantly attack creative boundaries by ignoring them altogether is sick. It’s big dick energy. We love it. We love the bravery around pushing the limits. Spiritbox is another band. They’re really good at refining heavy sounds in a poppy way. And then there’s Loathe. They inspired us a lot when we were in lockdown; they’re phenomenal.

We’re all Australian core kids, so Northlane and Polaris inspired Somniphobia as well. We’ve all come from early 2000’s radio metal/rock, the likes of Slipknot, Paramore and Three Days Grace making heavy music with a pop edge. When we wrote the song a few years back, that wasn’t being celebrated, but it’s become the in thing now. I’m all for it, but everyone was in their djent phase a few years back. It’s cool to see an embrace of that mid-2000’s thing that everyone hated until ten minutes ago.

Can we expect more music from the band soon?

You can expect at least one more song this year, maybe even two. We have an entire song completely finished and ready to go. We can’t say when it’s dropping, but it won’t be too far off. Expect it to be heavier and angrier. Everything Somniphobia was but dialled up to 100. That’s all I can say for now.

I just want to elaborate on the message of Somniphobia. We wrote it because we wanted people to feel like they weren’t alone in something that can be really isolating and terrifying.  Somniphobia is under-reported in the mental health realm. When people talk about mental health, it’s usually generalised concepts. Having a conversation in the first place is great; it wasn’t like that a few years back. But, we hope people take away the sense that they’re not alone in any of their mental struggles, whatever they may be. Even when you feel isolated from everyone else, you can still reach out. We wrote this track from the point of view of someone who hadn’t, and how devastating being truly alone can be. If there’s something up, please talk to someone. It’s a scary world.